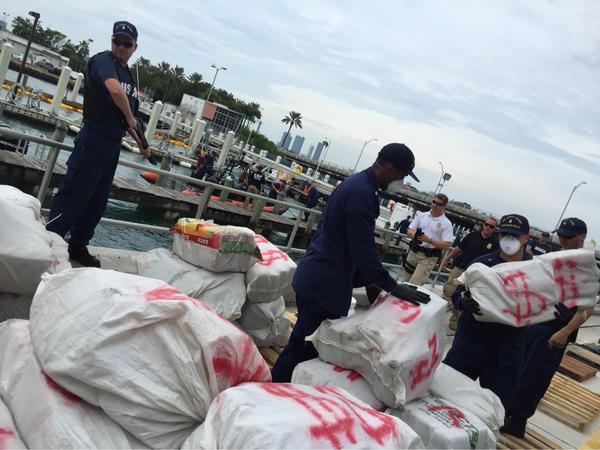 Coast Guardsmen unloaded about 1,100 kilograms of cocaine and 4, 420 pounds of marijuana at Coast Guard Base Miami Beach.

Coast Guardsmen found the drugs in the Caribbean Sea as part of Operation Martillo and Unified Resolve.

The United States Coast Guard has seized about 150 metric tons of cocaine worth about $5 million dollars in 2015.

Several of the drug seizures have been from ships based in Hampton Roads.

The Norfolk-based guided-missile frigate USS Kauffman and its embarked Coast Guard Law Enforcement Detachment recovered approximately 630 kg of cocaine in international waters in the drug transit zone of the Eastern Pacific on May 6th. The estimated wholesale value of the drugs is approximately $23 million.

The USS Kauffman and two Canadian warships seized $33.9 million worth of cocaine from a freighter in the western Caribbean on February 28th.

According to a news release from the Coast Guard, the crew of the Coast Guard Cutter Bear from Portsmouth seized an estimated $116 million worth of cocaine from suspected drug smugglers and vessels while they were on patrol.