Blind and paralyzed, an adventurer takes new steps thanks to robotic exoskeleton 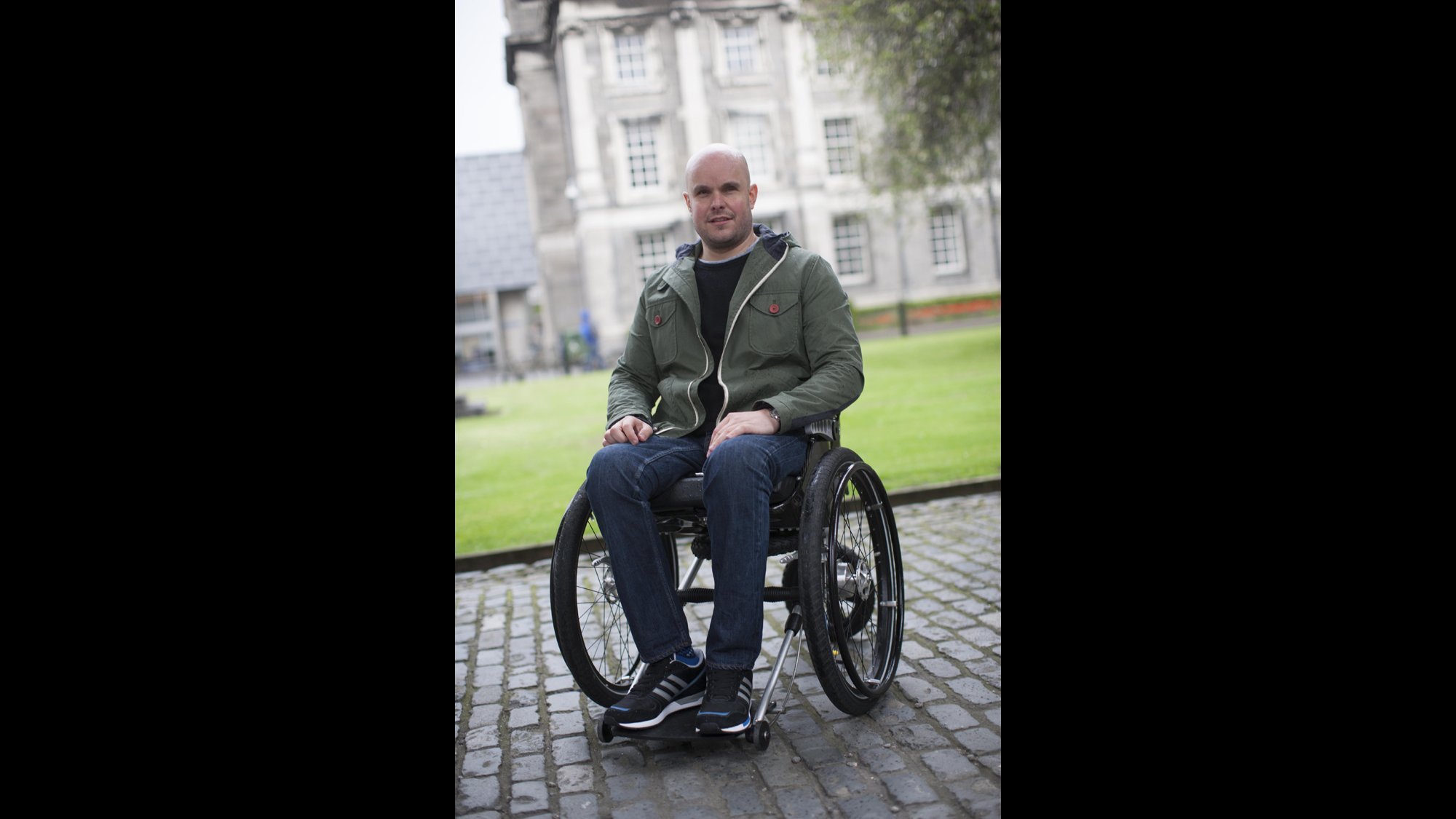 As a young boy growing up in Northern Ireland, Mark Pollock dreamed of being Superman one day.

Like his childhood comic hero, action and adventure have filled Pollock’s life, but also tragedy. He is blind, and an accident as an adult left him paralyzed. But he never let his physical setbacks stop him.

“Whenever I put my Superman costume on as a kid, I didn’t have X-ray vision. I had desperately short sight and had to wear big. thick glasses to see,” Pollock said during a talk at TEDxHollywood in 2014. “I couldn’t leave (glasses) in the phone box like Clark Kent could. That short sight lead me to have a detached retina.”

At the age of 5, Pollock had lost his vision in his right eye. Episodes of periodic blindness followed when a rogue Frisbee hit his left eye when he was 8 and at age 14, when he had another detached retina, this time in his left eye.

After graduation, he aspired to be an investment banker and work in London, but life took a different turn right before Pollock, then 22, was about to graduate. While finishing up his studies at Trinity College in Dublin, an unsuccessful operation on his left eye left Pollock permanently blind in both eyes.

“When I lost my sight, I lost my identity, but, then I thought, ‘What is going to be possible for me?'” Pollock said in a phone interview.

Learn to navigate the unpredictable: It is a mantra Pollock shares with audiences as a motivational speaker. In his book “Making It Happen,” which he co-authored with filmmaker Ross Whitaker, Pollock details his experiences living with blindness and the importance of recognizing the current reality of any situation.

“This is key before you move forward,” Pollock said. “Then expect problems while exploring all the possibilities.”

“Sports gave my life meaning,” Pollock said. “I always wanted to be in the middle of the action. For me, competing means trying to pursue success and risk the possibility of failure. But being in there and trying is key.”

Pollock went on to become a successful ultra-endurance adventure athlete. His list of accomplishments grew every year.

In 2002, Pollock won bronze and silver medals in rowing at the Commonwealth Games. The following year, he raced six marathons in seven days across China’s Gobi Desert. He participated in an Ironman triathlon in Switzerland in 2006, and in 2008, made history as the first blind man to race to the South Pole.

Pollock felt unstoppable. After completing the adventure of a lifetime and pumped with confidence, Pollock was ready to propose to his girlfriend, Simone George, a lawyer from Ireland.

“We met by learning how to dance together,” Pollock said of George, who taught him to salsa.

Just weeks before Pollock and his fiancée were getting ready to exchange their vows and dance at their wedding, tragedy struck again.

In the summer of 2010, Pollock was in England with a group of friends to attend Henley Royal Regatta, an annual rowing event held on the River Thames. While walking in the house where he was staying, he fell 25 feet from a second-story window, and landed on the concrete below. Pollock does not recall details of the incident.

“I fractured my skull, broke my back and the damage to my spinal cord left me paralyzed from the waist down,” Pollock said. “At the time, people who found me lying on the concrete thought I was dead. Even doctors predicted I was going to die.”

Spending the next 16 months in the intensive care unit, Pollock knew life as a blind and paralyzed man would be incredibly challenging.

“When I realized what was happening, at times I wondered if dying would have been a better outcome,” Pollock said. “The real truth of paralysis is not just the lack of movement or feeling, but rather that I was going to suffer from lack of bladder control, sexual function and my life expectancy could be reduced.”

After the incident, Pollock’s fiancée quit her job and stayed by his side for each step of the recovery process.

“I’ve been extraordinarily fortunate to be surrounded by people who want to go on the journey with me, through all the ups and downs,” said Pollock. “People I’ve relied on are generally the people who want to be there along the way, not those who are being forced to be.”

What Pollock had to do now, he said, was keep his eye on the prize.

A journey of a thousand steps

Now 39, Pollock wants to be a voice of change to help “fast track” a cure for paralysis. Working with doctors in America, Russia and Ireland, he says researchers have already made significant strides in the field of spinal cord injuries.

“One day scientists may find the cure, and if not, I will have at least contributed to the body of research that is out there for the future,” Pollock said. In 2012, Ekso Bionics, a high-tech firm which manufactures robotic limbs, linked up with Pollock and fit him for his own pair of robotic legs.

Last month, Pollock made international news by using a “robotic exoskeleton,” an external contraption which support Pollock’s body in the upright position, under the guidance of doctors at the University of California, Los Angeles.

Doctors working on the technology call this a “novel, noninvasive spinal stimulation technique that does not require surgery.” By placing electrodes over the spinal cord, doctors were able to stimulate the nerve cells which survived the injury. Pollock was able to take voluntary control of his leg muscles, stand upright and take thousands of steps during a five-day test training session, UCLA doctors reported.

Doctors say re-establishing the action potential from the brain to the spinal cord allows for interplay between the subject and the technology.

“This particular robot allows the subject to participate in the movements and that amount of participation can be measured by the device itself,” said UCLA’s Dr. Reggie Edgerton, one of the pioneers in the field of neuromodulation. “Simply speaking, motors drive the device so that the joints move as they need to move to step, the power and or current need to drive the motor normally comes from the sources of power from the device itself, such as the battery that stores the energy. But the subject itself can contribute to the work that needs to be done. The more work the subject does, the less work the robot does.”

The technology, which doctors say could potentially be available to the public in a couple years, holds promise for millions of paralysis victims around the world.

In American alone, nearly 6 million people live with paralysis, according to a study initiated by the Christopher & Dana Reeve Foundation.

Pollock continues to draw inspiration from Christopher Reeve, who played his childhood hero, Superman, saying he paved the way for the work he and others do to find a cure for paralysis. Reeve was paralyzed after a horse riding accident in 1995 and died in 2004.

“The road to recovery is still a long one,” Pollock said. He spends four hours a day, four days a week in physical training.

“Walking in the exoskeleton robot and working with incredible scientists from around the world, that’s the exciting and easy bit. It’s the impact on the day-to-day mundane things like getting up in the morning or taking a shower that are difficult,” Pollock said. “The lack of overall independence and lack of dignity is tough.”

Despite the setbacks, Pollock cannot be stopped. Through his foundation MarkPollockTrust.org, he travels the world as a motivational speaker to help raise awareness on paralysis.

“It’s about collaboration,” Pollock said. “To make the good research and innovations available to the masses, scientists, industry leaders, foundations and the public have to join forces.”