When fire units arrived, they reported heavy smoke and fire coming from the back of the building. The fire involved three apartment units and extended into the attic.

It was contained and extinguished in approximately one hour.

Due to the heavy fire, smoke and water damage throughout, all three units were condemned. Fire officials say the residents were not home at the time of the fire and the initial calls were reported by maintenance workers.

The Red Cross is assisting the five displaced residents.

Firefighters rescued two pets from inside of the buildings.

Firefighter Cameron McCorkle shared oxygen with one of the cats he saved.

"With the smoke being so quick you couldn't really see him, but when I went back up I was able to see him. I was able to grab him and pick him up," McCorkle said.

With no one inside of the three units, pets needed the most rescuing today.

Dewoyne Daye wasn't home during the fire but his pup Benz was. But when firefighters ran in, Benz ran out @WTKR3 pic.twitter.com/224v23mG9W

Though the two pets were saved, officials say one cat died. There were no injuries.

"It's tough. I don't think I'd be able to stand here doing this interview if I didn't have my dog. It's my only son. It would definitely be tough. My heart goes out to the owner of the pet and the family that will displaced," Benz's owner Deywone Daye said.

One firefighter was transported to a local hospital where he was treated for smoke inhalation and released.

Investigators are still working to find the cause of the fire. 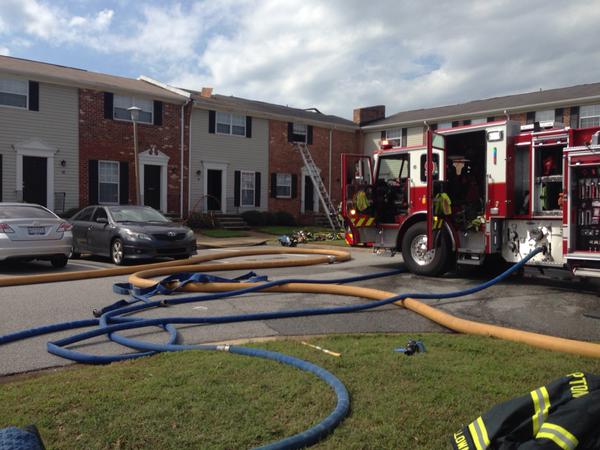