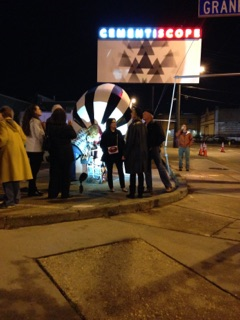 Norfolk, Va. – The City of Norfolk was home to plenty of lights, camera and action Friday night when it hosted its first ever “Neon Fest” in the downtown area.

The festival was a collective of artsy souls, giving off a neighborhood block party feel. Many vendors, performers and art lined the streets as people from all walks of life explored what the festival had to offer.

The streets of downtown Norfolk were lit with an abundance of color and the sound of steel drums and other melodies.

Participants had the opportunity to explore exhibits including The Garage &Other Side.

Several art organizations partnered with the Downtown Norfolk Council to produce the festival, creating a wonderland of bands, popup performances, sculptures and lights.

“The festival has given a lot of exposure to local artists.” says Mary Miller, president of the Downtown Norfolk Council.