SINGAPORE — “We’re all weird here,” Syrena says, as she sits on the pool step flipping her tail in the water as her students bob beneath the surface practicing their breathing.

The founder of Singapore’s first Mermaid School is on a mission to create the city-state’s first pod.

“I wanted to create a community where people who shared the same interests could come together,” Syrena says, who’s also a mermaid performer otherwise known as Cara Nicole Neo.

The fascination with mermaids dates back to “time immemorial,” according to the National Oceanic and Atmospheric Administration (NOAA), which issued a statement denying their existence in 2013.

“Magical female figures first appear in cave paintings in the late Paleolithic (Stone Age) period some 30,000 years ago, when modern humans gained dominion over the land and, presumably, began to sail the seas,” the NOAA said.

However, it concluded “no evidence of aquatic humanoids has ever been found.”

The statement followed a blockbuster episode of Animal Planet — “Mermaids: The Body Found” — which claimed to show new evidence of aquatic humanoids. The episode, later revealed to be a hoax, delivered record-beating ratings.

The class starts with mermaid theory, as we sit cross-legged on the floor (tails don’t come out until the practical part of the lesson). 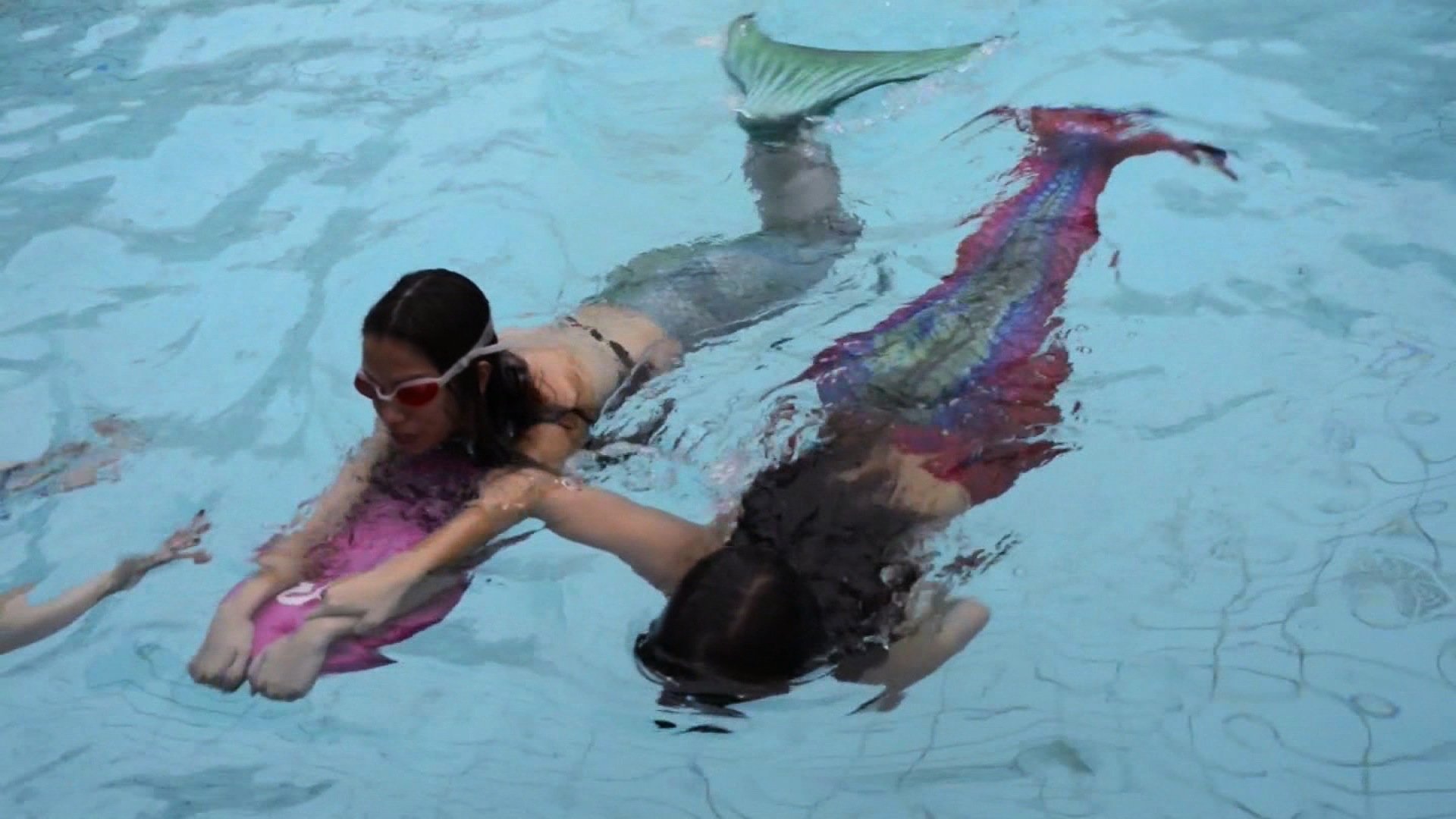 “If you could just put up your right fin…” Syrena prompts, as she leads us through the mermaid school pledge.

“The world is cold and harsh, but here we find peace and friendship…”

In this school, embracing your inner mermaid is just as important as proficiency in the pool with a tail. “I talk about the mermaid’s mirror and how as mermaids and mermen we have the power to create the reality of what we see in the mirror,” Syrena says.

While there’s no formal accreditation for mermaid schools, Syrena has set a four-stage syllabus, from bronze for beginners to silver, gold and finally platinum, where students learn underwater choreography.

For inspiration, Syrena looks to merfriends around the world, a loose community of aficionados who revel in slipping on a tail and getting wet.

For the last 70 years, the “home” of mermaids has been Weeki Wachee Springs, a theme park in Florida that employs its own pod for shows seven days a week, every day of the year.

“We have a lot of girls who audition and very few of them would actually make it,” says John Athanason, who’s been the company’s public relations manager for 14 years.

Of 50 women who attended the last audition, only two were accepted, Athanason explains. And even then, both quit by the end of the first week of training.

“When the mermaids jump into the spring — it’s cold — it’s 72 degrees Fahrenheit year round (about 22 degrees Celsius).”

“There’s 117 million gallons (almost half a billion liters) of water right beneath them coming out of the spring, the aquifer. That’s causing a five-mile an hour current (eight kilometers an hour).

And then of course there’s the natural wildlife. There are the turtles that might be nipping at them, or the fish,” he says.

So why do they do it?

“They get to travel — they get to be on TV shows. It’s tough to let it go,” he says, adding that the longest-serving mermaid had been there for 14 years. And some even come back part-time after leaving.

Athanason is full of praise for Syrena’s efforts.

“We like the fact that the mermaid world is expanding — there’s a place for everyone, as far as we’re concerned. We admire other women who go out and fulfill their dreams,” he says.

Imported from Germany, the fins are made of plastic and covered in a spandex stocking that’s best squeezed into with a small shuffle away from the pool.

Once in water, it’s very much like wearing normal fins — or flippers — except, of course, that your feet are held together and any motion needs to come from the waist.

“You have kind of consciously not be bending your knees, or powering yourself from the wrong part of your body — that was the hardest part,” says Natalie, who describes herself as an average swimmer.

The only merman in the group, Nigel says, “You go into a state of mind where you can be whatever you want to be… so you feel accepted and you feel loved part of a big community.”

Though only a few months old, and with a handful of students, Syrena is hoping her school will spread the love.

“Once you learn to see your own inner beauty and learn to love yourself, then you have a responsibility to extend that love to the community around you.

“This is not a self-centered, selfish mermaid community. It’s one that gives back and makes a change.”