Secretary Kerry is spending the morning visiting the USS San Antonio (LPD 17) to celebrate the United States Marine Corps 240th birthday. During the birthday event on board the ship and in accordance with a longstanding Marine Corps tradition, a cake was cut by the oldest and youngest Marines present.

As the guest of honor, Secretary Kerry got the first piece of cake!

After the birthday event, Secretary Kerry took an environmentally-focused tour of the ship and visited with Marines.

"We really couldn't do what we do anywhere in today's world without the safety you provide us, the security and the help you give to every single one of America's outposts," Secretary Kerry said during his tour.

After leaving Naval Station Norfolk, Secretary Kerry headed over to Old Dominion University where he gave a speech on climate change and national security.

#VIDEO Big welcome for @JohnKerry as he makes his way into the Ted Constant Convocation center at @ODUnow pic.twitter.com/zk3JpguJDR

"Climate change has a direct impact on military readiness," he said in reference to Naval Station Norfolk being on land threatened by sea level rise. "You don't have to wait until you're 100 percent certain of an imminent threat to take action."

Secretary Kerry spoke for about an hour before leaving to have lunch with students. 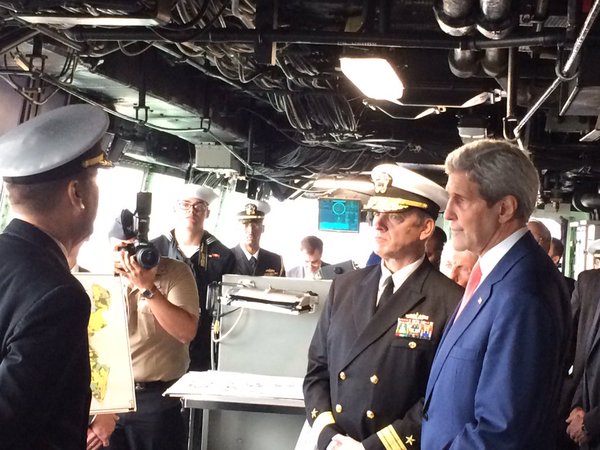