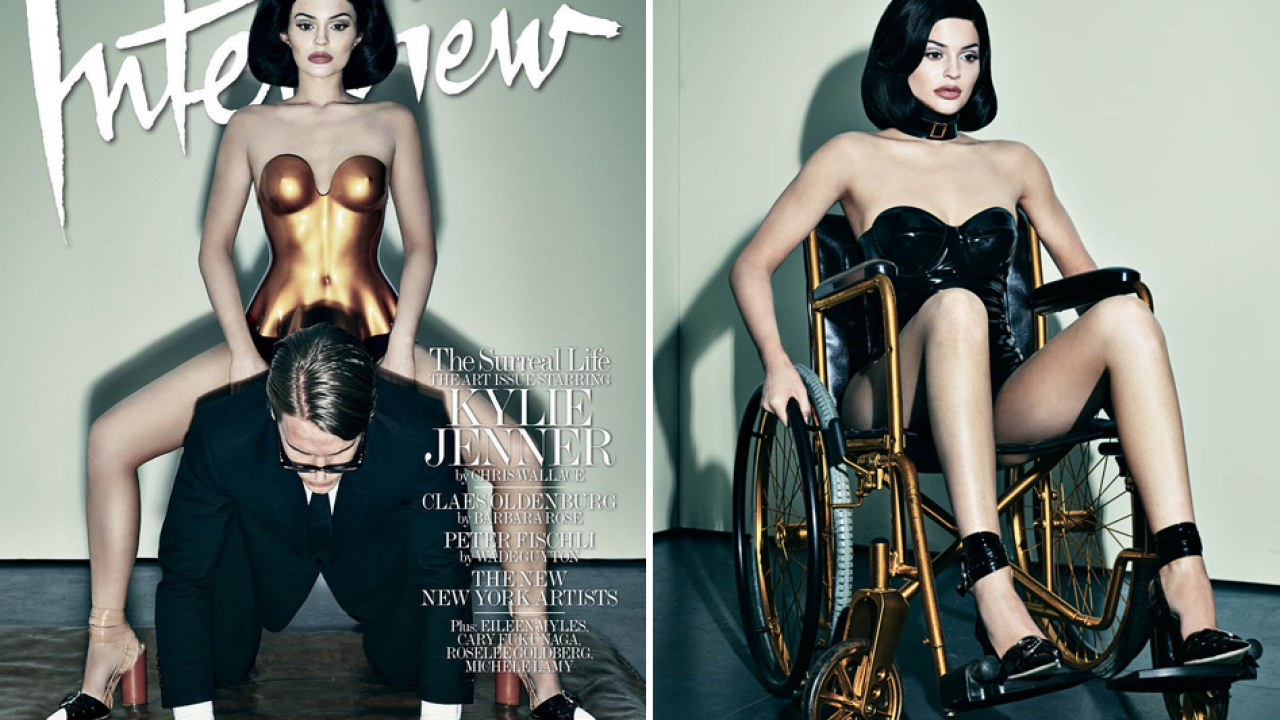 Kylie Jenner. As a sex doll. In a wheelchair.

What could go wrong?

Plenty, say disability advocates, who argue that the photo spread for Interview magazine is at best a tone-deaf disaster.

“People with disabilities are already seen as powerless, and this just reinforces that,” she said.

Plastic doll vibes ;) pulling my face back with tape all day was much worth it for this amazing art cover of @interviewmag with @stevenkleinstudio & #karltempler so dope!!!!

In many of the photos, she appears stiff, with a blank expression that makes her resemble a sex doll. In one shot, she is seen inside a wooden shipping crate. In another, a man totes Jenner on his side like a package, her arms and legs rigidly outstretched. In some, she is seated in a wheelchair.

While the sexualized nature of the images generated some commentary, it’s the wheelchair shots that have provoked the most intense reactions.

“I’m constantly infantilized because of my wheelchair, denied even the idea of sexuality and agency let alone desirability. But Kylie?” Atlanta writer Kayla Whaley tweeted. “She gets paid and praised to wear the shallowest possible illusion of my disability for a few hours.”

Reaction to the shoot was swift and broad.

“So disabled models can’t get work or advance in the fashion industry but Kylie jenner can use a wheelchair and be classed as edgy,” Twitter user @Bendy_Mermaid posted.

“Oh I see! When I’m in my wheelchair noone can look me in the eye but when Kylie Jenner sits in a wheelchair it’s FASHION. Silly me,” Twitter user @amysgotmilk said.

The images are troubling for a variety of reasons, Beitiks said.

They highlight the often devalued portrayal of disabled people in popular culture and the vanishingly small role of the disabled in fashion and entertainment, she said.

Lady Gaga received similar criticism a few years ago for performing in a wheelchair, but the images featuring Jenner are much worse, Beitiks said. “I think she’s literally being objectified made to look like a sex doll, and this wheelchair is an added element of passivity they’re adding on.”

In other words, they’re pushing both disability and gender objectification buttons at the same time, she said.

So what to do?

An apology would be nice, Whaley said Tuesday, although she doubts it will happen.

And maybe start including people living with disabilities in creative discussions about art, fashion and media, she said.

“Just include us,” she said.