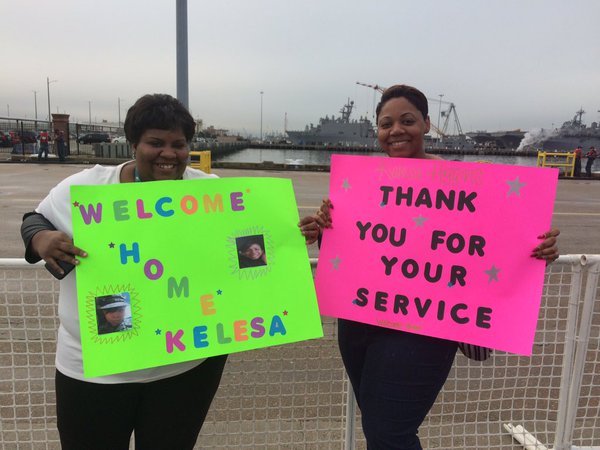 The George Washington’s arrival to Norfolk is part of a three-carrier swap with the carriers USS Ronald Reagan and USS Theodore Roosevelt. Key personnel, including the commanding officer, executive officer, and those related to unique systems, remained with their ships. Following the George Washington's arrival in Norfolk, nearly two-thirds of the crew will return to San Diego and embark onboard the Roosevelt.

The arrival of the #USSGeorgeWashington marks the final leg of the @USNavy's three carrier swap, dubbed "The Presidents Crew" #CVN220 @WTKR3

Once in Norfolk the George Washington will prepare for its mid-life Refueling Complex Overhaul at Newport News Shipbuilding in 2017.

The George Washington traveled 52,064-miles on its seven-month voyage to Naval Station Norfolk, stopping in San Diego for a 10-day crew swap turnover with the Ronald Reagan in August. The George Washington then sailed around South America, participating in Southern Seas 2015 and UNITAS 2015.

"Our crew is excited to return home to their families," said Capt. Timothy C. Kuehhas, Washington's commanding officer. "Our homecoming is significant for both our crew members who have been on deployment for many months, and for our ship which is returning home after being forward deployed to Japan since 2008."

"A three-carrier crew swap is certainly a complex evolution," said Kuehhas. "It was well planned by the staff of Commander, Naval Air Forces and well executed by the deckplate leaders of the three ships. The crew of George Washington will now focus attention on local operations in 2016 as the ship will serve as the training platform for the qualification of student naval aviators heading to fleet squadrons."

During Southern Seas 2015, 447 Sailors were selected to advance to the next higher paygrade, including 42 advancements to chief petty officer. The George Washington's crew also earned more than 1,700 warfare pins during this deployment.

"This is proof that we have great people working with us and I'm very proud of all the things we've been getting done," said Command Master Chief Franklin "Spike" Call, Washington's - and formerly Reagan's - senior enlisted advisor. "People didn't waste time. We have good, solid, honest Sailors qualifying for warfare pins, and to do that in conjunction with meeting the ship's demanding mission is just a staggering accomplishment."

For some of the crew members aboard Washington, this is the first time coming home to the U.S. in a long time.

"This ship stood the watch overseas for almost eight years and now is honorably returning home with a great crew that's come together as a family," said Call. "With new people working together [as a result of the hull swap], it takes a tremendous amount of patience to get to a place where you can come together and do great work. Out of all the things we've accomplished, the thing that I am most proud of is this family coming together so fast as a solid unit to get done what needed to get done."

Commanded by Rear Adm. Lisa Franchetti, CSG 9 is comprised of flagship George Washington with embarked squadrons of Carrier Air Wing (CVW) 2, CSG 9 staff, Destroyer Squadron 23 staff, and was joined during the Southern Seas 2015 deployment by the USS Chafee, USS McFaul, USNS Big Horn, and USNS Guadalupe. The Chafee is returning to her home port in Pearl Harbor, Hawaii, and the McFaul is returning to her homeport at Mayport, Florida.

The squadrons of west coast-based CVW-2 embarked as part of CSG 9 include the "Bounty Hunters" of Strike Fighter Squadron (VFA) 2, the Virginia Beach-based "Blue Blasters" of VFA-34, the "Kestrels" of VFA-137, the "Golden Dragons" of VFA-192, the "Gauntlets" of Electronic Attack Squadron (VAQ) 136, the "Black Eagles" of Carrier Airborne Early Warning Squadron (VAW) 113, the "Blue Hawks" of Helicopter Maritime Strike Squadron (HSM) 78, the "Black Knights" of Helicopter Sea Combat Squadron (HSC) 4 and the "Providers" of Fleet Logistics Support Squadron (VRC) 30.