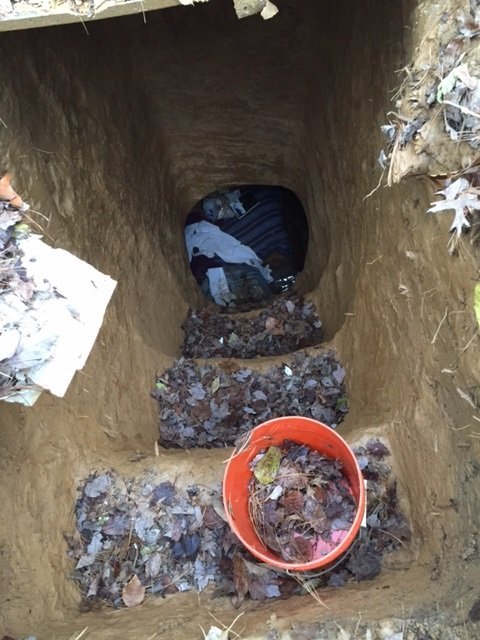 A homeless man was arrested Sunday for constructing and living in an underground cave that was dug 15 feet underground in Fairfax, Virginia.

Along with sleeping gear and digging tools were educational books and writings on religion, the English language and the United States criminal justice system.

“To the left was a small alcove that was a little smaller where we thought he was sleeping. The room to the right was a bit larger from floor to ceiling that was about 5½ feet tall, so you could almost stand up.”

Rios hasn’t told police how long it took to create the cave and how long he lived there.

The underground cave was in woods approximately 200 yards behind the Fairfax Police Department. Inside the cave was evidence that Rios not only slept in there but also spent time self-teaching.

Along with sleeping gear and digging tools were educational books and writings on religion, the English language and the United States criminal justice system.

No identification has been found connecting Rios to any school, but a library card was found that is suspected to be the source for his studies.

“I’ve never seen an underground cave, but I have seen homeless camps like tents and makeshift shelters above ground. But I have never seen something as intricate as this,” said Hinesley.

Rios has been charged with destruction of property and has an outstanding warrant from Arlington county for failing to appear at court for traffic charges, according to Hinesley.

An emergency public work crew went to the area on Monday to dig out the hole and fill it in to prevent caving or endangering the public.

According to data provided by the National Alliance to End Homelessness, on a given day over 800 people experience unsheltered homelessness in Virginia in 2015.

There was a 32.5% decrease in unsheltered homelessness in Virginia from 2013-2014 according to Alliance’s report from last year.

Approximately 31% of the homeless population was found in unsheltered locations, according to a census in the U.S. Department of Housing and Urban Development’s 2015 Annual Homeless Assessment Report.