One lucky Reddit user who participated in this year’s Reddit Secret Santa exchange got the Secret Santa everyone was hoping for – Microsoft founder and billionaire Bill Gates.

In a post on the “RedditGifts” website, the woman who received Gates’ gifts posted a rundown of the extra thoughtful gifts she was given.

The woman, who only describes herself as “a chick in her 30s,” explains that she is a big fan of hiking and the outdoors. She says she received a variety of outdoor gear, including a new tent, mosquito net, camping chair, books, a music playlist and a donation in her name to the charity “Malaria No More.” 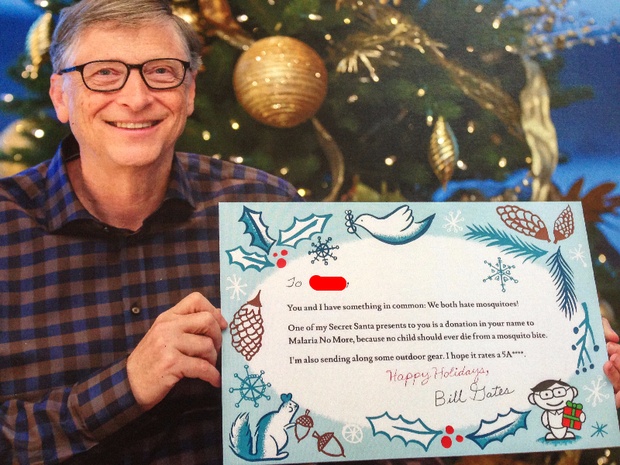 The woman writes that she had the opportunity to visit Zambia last year and the prevalence of malaria was often discussed.

“I bring all this up because my Santa gave me the amazing gift of a donation in my name to an organization called Malaria No More which is dedicated to wiping out malaria. They provide prevention, treatment, and research towards more permanent solutions (namely vaccines). It is very cool. I also received some very cool stuff (like seriously rad stuff) but it is, in the end, stuff and the donation will help create a lasting effect on people other than myself.”

Gates, who is known for doing incredible research into his giftee’s likes, also included a photo of himself holding up a sign that explained his gifts.

The exchange currently holds the Guinness World Record for the largest Secret Santa Gift Exchange.  Click here to read more about it!