Richmond man creates a “White Christmas” for his wife

RICHMOND, Va. (WTVR) -- When Trevor Smithson asked his new bride Kourtney what she wanted for Christmas, she told him she just wanted to see snow.

The 24-year-old newlywed said she did not remember ever waking up to a White Christmas in Richmond. With temperatures expected to be in the 70-degree range this Christmas, the snow,  it seemed, would have to wait.

But Trevor was not ready to give up.

Trevor works with special effects on the AMC's Revolutionary War series TURN that is filmed in Richmond.

"We do smoke, we do fire, we do snow,"Trevor told WTVR about his work experience.

So when Kourtney woke up Christmas morning, Trevor asked her to make breakfast while he went outside to do some work.

When everything was ready to go, Trevor invited his wife outside and turned on the special effects snow machine. And just like that, it was snowing in Richmond, at least at one house. 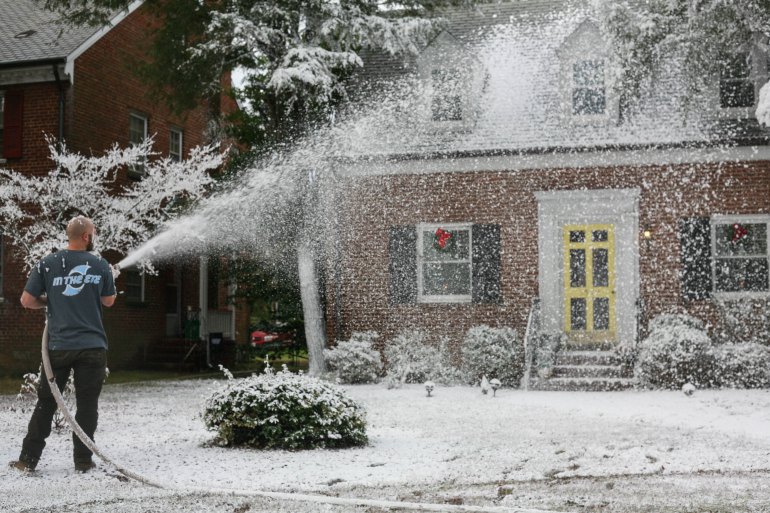 "I started crying," Kourtney said about her thoughtful husband's gesture. "It was one of the best presents I ever had."

What started out as a gift for his new wife, turned into an unexpected gift for the neighbors on Montrose Avenue.

"All of our neighbors came out to see what was going on. People were taking selfies, having fun," Trevor said. "There is so much nonsense and crazy stuff going on in the world right now, it was cool to meet neighbors I did not know and invite them over for a cup of coffee."

The snow Trevor made is unlike the machine-made snow used at ski resorts. His snow consisted of a mixture of air, water and soap. He said it would probably last three or four hours before it went away.

When asked about her Christmas gift, Kourtney said she felt bad for all the other ladies out there because she had the perfect man. After all his hard work, Trevor told his wife don't plan on getting a White Christmas every year.