DUBAI – Clouds of smoke continued to waft Friday from a 63-floor luxury hotel in Dubai that was engulfed in flames on New Year’s Eve.

Firefighters had battled the blaze raging at the swanky Address Downtown Dubai hotel late Thursday as a spectacular New Year’s fireworks display lit up the night sky nearby.

The fire started around 9:30 p.m. (12:30 p.m. ET) Thursday and burned well into the early hours of Friday. Witnesses said they heard explosions as the blaze ate away at one side of the towering structure in the heart of downtown Dubai.

Bruce Szczepanski, who watched from the balcony of a nearby hotel, said he could still hear parts of the building crashing to the ground more than nine hours after the blaze began.

“There are huge flames, and you can hear the structure falling and the thuds,” he said.

Blaze said to have started with curtains

By Friday morning, smoke was still drifting out of the blackened side of the building, which was still standing. Authorities had said late Thursday night that they were bringing the fire under control.

The flames leaped up the building as governments around the world were on high alert for possible terrorist attacks tied to New Year’s Eve celebrations, but there was no initial indication that terrorism was to blame for the blaze.

A source told CNN that the fire broke out in a residence on the building’s 20th floor when curtains caught alight.

At least 16 people received medical assistance, most of them for minor injuries caused by overcrowding and smoke, the Dubai government said Thursday night.

Jaqueline Hurtado, a CNN en Español correspondent, was at a restaurant in the area when she heard an explosion, “like a loud pop.” She thought the fireworks display may have started early.

“Then suddenly you saw people screaming and running,” she said.

The nearby hotel, they realized, was on fire. Soon authorities evacuated them from the area.

“The fire was just going so fast,” she said. “It just started burning real quick.”

The highly anticipated New Year’s Eve festivities in the United Arab Emirates’ most populous city — including what was billed as one of the world’s largest fireworks displays — went ahead as planned.

Cheering crowds of onlookers watched as bursts of color filled the sky around the Burj Khalifa, the world’s tallest building.

Just a few blocks away, the scene was dramatically different.

At the Address hotel, which describes itself as “the premier five-star hotel” in Dubai, flames appeared to be gnawing away at growing portions of the high-rise, even as government officials said the blaze was largely contained.

‘They got us out calmly’

Maha Abouelnebin saw what appeared to be a low flame while she was having dinner with her family at the hotel.

Then she realized it was something far more dangerous: a full-blown blaze.

“Immediately we decided we need to get out of there, because we saw debris falling from the building,” she told CNN.

Staff efficiently evacuated the hotel, she said. “They got us out calmly… quickly. We were impressed with how easy we got out of there.”

Dubai authorities said guests evacuated from the hotel would be provided with new accommodations.

Yikes. Major fire in #Dubai at the address hotel, right next to #DubaiFireworks site pic.twitter.com/87Z2cidfYm 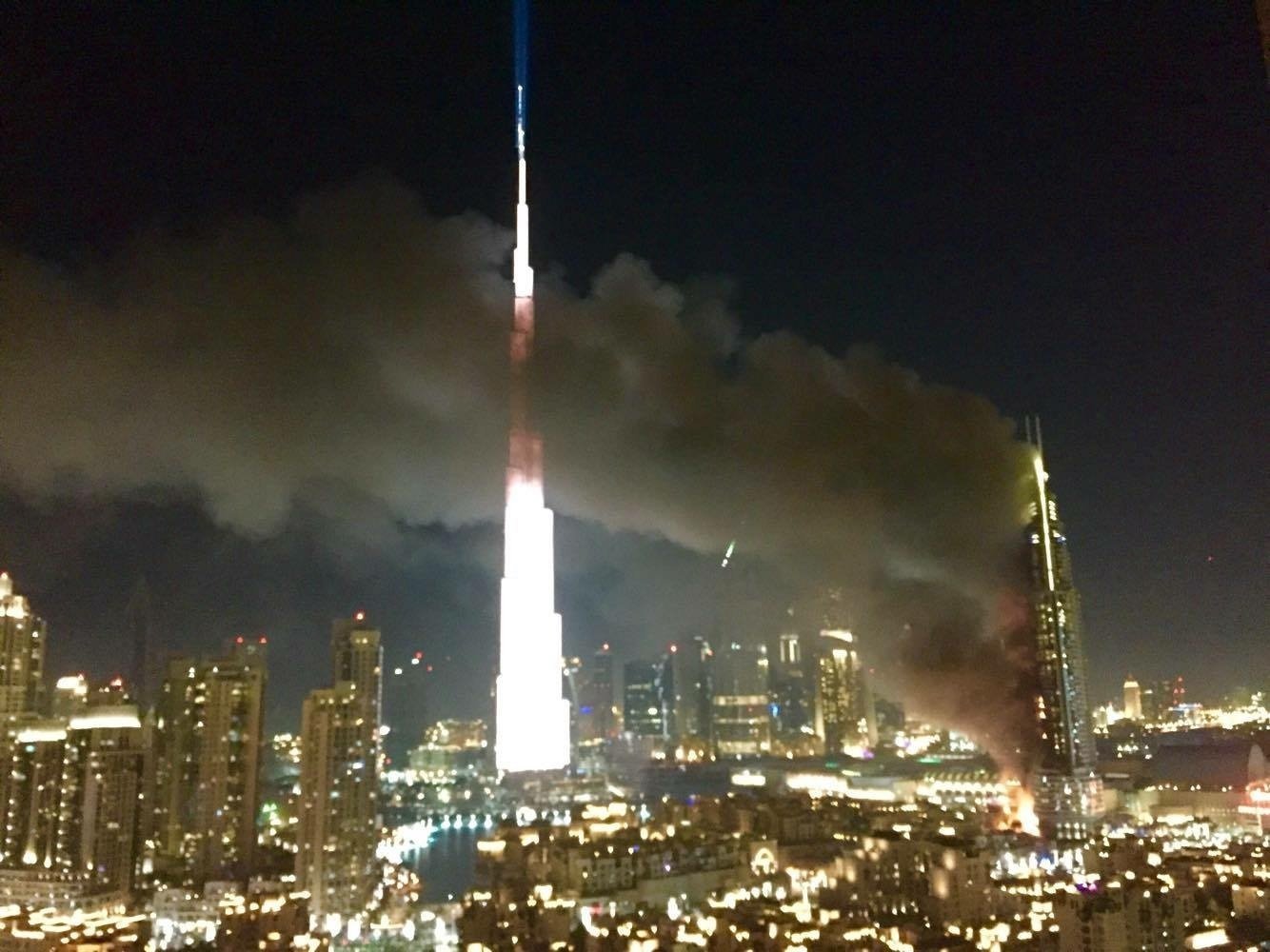