Is this the first ever flower grown in space? 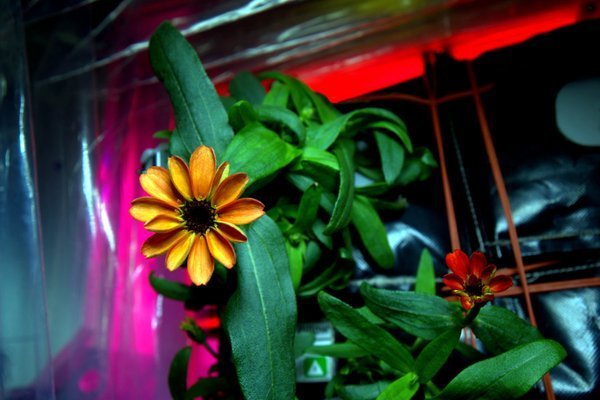 To boldly grow where no man has grown before.

That has been the mission of astronauts aboard the International Space Station (ISS) for nearly two years, where they have tried to cultivate edible plants in microgravity.

But now, after a few failed growth cycles, it seems the team’s efforts are finally blossoming, with their first ever bunch of zinnia flowers blooming in space.

U.S. astronaut Scott Kelly tweeted a photo of one of the orange flowers, writing: “First ever flower grown in space makes its debut! #SpaceFlower #zinnia #YearInSpace”.

Kelly brought the flowers back to life after mold started growing on some of the leaves because of high humidity, according to a recent NASA blog.

He joked on Twitter that he needed to channel his “inner Mark Watney”, referring to the fictional character in the film “The Martian” who successfully grew potatoes on Mars.

Zinnias are colorful, long-lasting flowers that are also edible.

It’s not the first time plants have sprouted in space.

In a blog, NASA wrote that this was the “first time a flowering crop experiment will be grown on the orbiting laboratory”.

But some have argued that a sunflower was actually the first flower to grow in space.

In 2012, astronaut Don Pettit successfully grew a zucchini, sunflower and broccoli out of zip-lock plastic bags on the ISS as personal science experiment. Pettit documented the life of his “companions” in a NASA blog called “Diary of Space Zucchini”.

Still, these small victories are just the beginning.

“I hope to see Veggie’s success as the first step in food production that will allow astronauts on the space station to enjoy fresh food and gain knowledge as we explore beyond low-Earth orbit,” said Brian Onate, who helped build the plant growth system before it went into space.

The Veggie project will also produce crucial information for a Mars mission, said Alexandra Whitmire from NASA’s Human Research Program. For example, understanding watering schedules in microgravity, and knowing what to do if there is mold growth or other challenges in these extreme conditions.

“In future missions, the importance of plants will likely increase, given the crews’ limited connection to Earth,” Whitmire wrote in a NASA blog.

She added that growing plants in space also has psychological benefits for astronauts, particularly in combating feelings of isolation and loneliness.

“Plants can indeed enhance long duration missions in isolated, confined and extreme environments — environments that are artificial and deprived of nature,” she said. “While not all crew members may enjoy taking care of plants, for many, having this option is beneficial.

“Studies from other isolated and confined environments, such as Antarctic stations, demonstrate the importance of plants in confinement, and how much more salient fresh food becomes psychologically, when there is little stimuli around.”