Williamsburg, Va. - One of the country's oldest African-American churches, the historic First Baptist Church of Williamsburg, kicked off its 240th anniversary celebration Monday by ringing its restored church bell that has been quiet for decades.

“The bell has been silent because of structural reasons. It was very unsafe”, says the church’s Pastor Dr. Reginald Davis.

"It's exciting. It sends chills through all of us who are descendants of of slaves who are African Americans. We are ringing that bell not just for us, but for everyone who couldn't ring the bell," Ambassador Suzan Johnson Cook said.

The Reverend Jesse Jackson was also there to share that moment. He was the keynote speaker.

"It symbolizes overcoming the scars of American sins and slavery, buying and selling of people," Reverend Jackson said.

"We need more social justice, and we need more quality in the country. I think if Auntie Rosa was here that's exactly what she would have said," Rhea McCauley said. 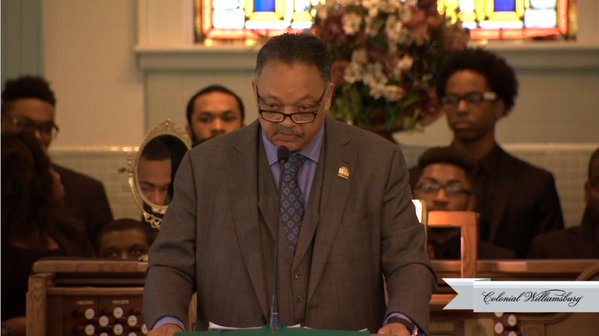 The ringing of the bell kicks off the month-long celebration of Black History Month and the church's 240th anniversary.

"We've learned to live apart. Now we must learn to live together." - @RevJJackson #LetFreedomRingChallenge

Throughout the month of February the Colonial Williamsburg and the College of William & Mary will also feature a series of special museum exhibits, lectures, films, town halls and events in celebration.

To reserve a spot to ring the bell and for more information about events and activities during Black History Month visit www.LetFreedomRingChallenge.org.