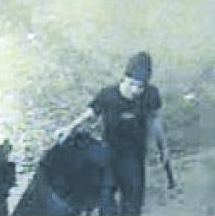 Newport News, Va. – Newport News Police and Fire & Rescue are investigating a string of dumpster fires that happened on January 14.

Three dumpster fires occurred in less than one hour.

The second dumpster fire was set behind Deyoung’s Boots on 6139 Jefferson Avenue.

The third fire was behind the Rent-A-Center on 605 New Market Drive.

Surveillance videos show a male driving a small unidentified car. In the video, he gets out of the car, walks to the dumpster, then gets back into the car and drives away. Moments later, a fire erupts.

The car was also caught on camera near the three arson scenes.

Police are also investigating a separate arson that happened on Christmas Day in 2014. A person set a fire in the back of the DAV Thrift Store on Warwick Boulevard in the Denbigh part of Newport News.

If you know anything about these arson cases, call the Crime Line at 1-888-LOCK-U-UP.