Chesapeake, Va. - Eight-year-old David Spisak, who made headlines after finding his 'true love' even as he suffered from terminal cancer, has died.

His family posted the following statement in a Facebook group devoted to his life:

There's never been a morning with such sadness as today and no words will do it justice but I'll try. Our little man's last moments were laying with his mommy and daddy in the middle of the night, with a house full of family, friends and loved ones after days of being surrounded by love. This day was supposed to come about 9-10 months ago but David just wasn't done living yet so he made his own timeline and defied the rules. The almost 7 years of cancer were so very hard but nothing like the last few days. Molly got to say goodbye to her baby brother as soon as it was clear the moment was close and she made sure to set a certain stuffed animal next to him before she left for Grammy's. Yesterday, he was already no longer "David," didn't know who was speaking to him and none of his words made sense; I guess your mind takes you away before your body lets you go, a self-protective thing. But those of us who heard it will never forget the feeling we felt hearing the last clear thing he said yesterday morning, mixed up with the other random comments, was "David wants to be a hero." I'm not ready to say things happen for a reason or a message of rainbows and sunshine just yet, but our baby boy was a fighter, a beautiful soul, a force to be reckoned with and of all the things, he is most definitely a hero. Rest easy sweet boy, you fought an unfair fight with the strength of a thousand soldiers that I could've never done...but you did it with grace; no more struggling. Just rest.

David was diagnosed with cancer when he was two. He had two transplants, including one from his 10-year-old sister, and still his cancer returned three times.

But one of those experiences wasn't one that a typical 8-year-old has.

David found the love of his life - 7-year-old Ayla. 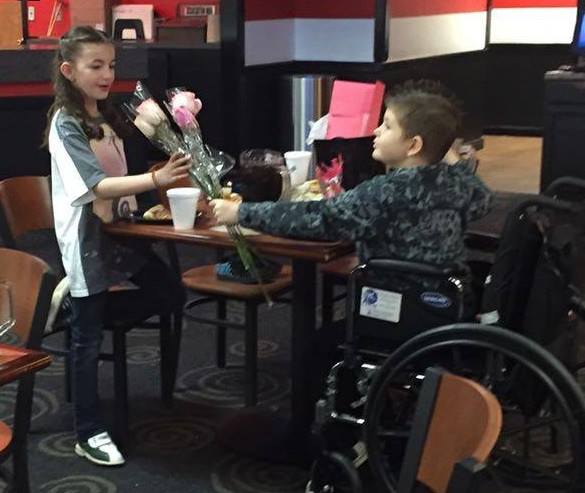 Adipsy, a local cancer support non-profit who brought meals to David’s mom, is trying to help David's family pay for his funeral. If you'd like to donate, you can visit their website or Facebook page.