Norfolk, Va - A woman has died following an early morning fire in the Ocean View section of Norfolk.

Fire rescue crews were called to a duplex on Kingston Avenue just after 2:00 a.m. Investigators say when crews arrived, the building was fully engulfed in flames.

Five people had already escaped from the home, but rescue crews were told a woman was still trapped upstairs. Firefighters had to use a ladder to pull the woman from the window on the second floor, but it was too late. Officials say the woman had suffered multiple burns and did not survive.

Three people who also lived on the second floor were taken to the hospital for minor injuries. 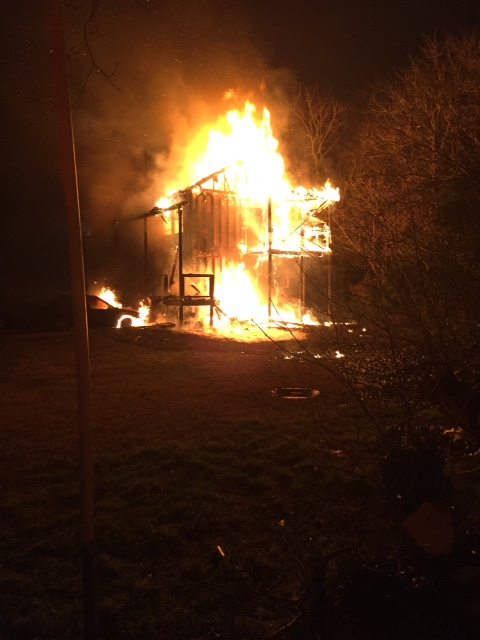 Investigators say another woman was also burned in the fire and was treated on the scene. That woman was Allen Cahoon's wife. He told NewsChannel 3 he woke up to flames at his front door.

"Another 10 seconds we wouldn't have made it" Allen's wife has 1st deg burns. Another woman died. Update @7 @WTKR3 pic.twitter.com/NlAYMW3SY7

He credits those extra seconds to his next door neighbor, 19-year-old Bradley Caswell, who in his boxers, ran out and starting waking them up.

"I was just watching a movie and I hear something bang or whatever," Caswell said. "I looked out the window and I saw a fire and ran outside because I didn't want anyone to get hurt. I just banged as hard as I could, banging on the bedroom window doing everything I could to try to wake them up."

Bradley was watching a movie when he saw flames. He ran out in his boxers & started waking his neighbors up @WTKR3 pic.twitter.com/ImBY3mkLKv

Everyone inside the duplex was able to escape except for that elderly woman on the 2nd floor.  Sandra Bowman lived in a building near by and knew who she was.

"She was a very sweet lady. Everybody around the duplex called her grandma. It's very sad," said Bowman.

Bowman added that the three others who were taken to the hospital were family members of the woman. She said they had to jump from a window on the second floor to escape, but their grandmother didn't make it.

Investigators are still trying to figure out what caused the deadly flames.