In an active shooter situation, don’t just stand there… 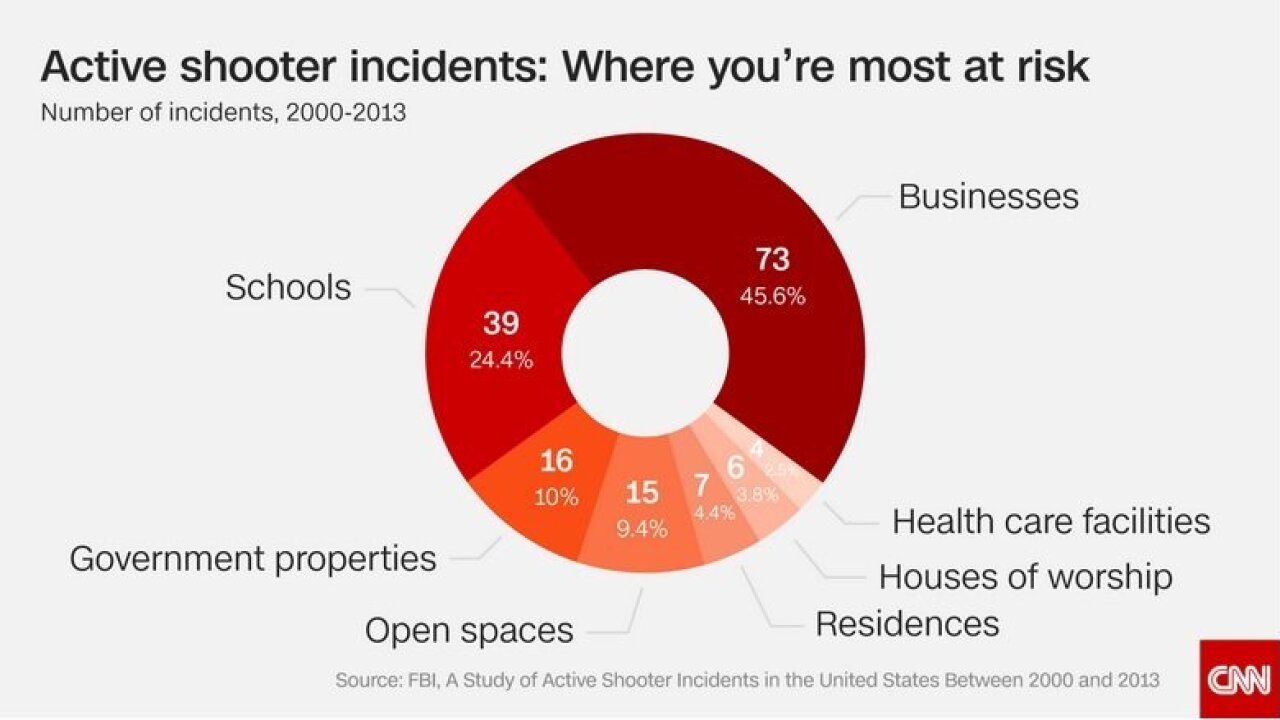 Law enforcement agencies across the country are training civilians how to respond to mass shooter events.

A crowd of about 350 listened quietly as the recording of a teacher’s eerie 911 call from Columbine High School bellowed over the church auditorium’s speakers.

“Heads down under the tables! … Oh, God! Kids, just stay down!” a panicked Patty Nielson barked at students taking refuge in the school library, her directives intermittently interrupted by gunfire.

The screen on which the closed-captioned recording was projected later morphed to a dramatization of a Columbine-style attack, as two gun-wielding young men storm through a school throwing chairs aside and shooting students hiding under tables.

Johns Creek police Maj. John Clifton had warned the audience the images might be disturbing.

The group had gathered for a Civilian Response to Active Shooter Events training held at Perimeter Church in the Atlanta suburb, one of several such events increasingly being held around the country. Jackson, Mississippi; Durham, New Hampshire; Greenfield, Indiana; Pampa, Texas; and Orem, Utah, are among the dozens of cities that have staged training sessions of late, and more seem to be popping up every week.

Beverlee Athens, 45, and her husband, John, 59, drove from nearby Alpharetta to attend the Johns Creek event. Katie, 2, bounced on her mother’s lap, oblivious that she was a primary reason her parents were at the church that night.

“I’m not going to sit back and be a victim,” Beverlee Athens said.

John Athens, a retired firefighter and emergency medical services instructor who’s in charge of security at his own church, said he and his wife have concealed-carry permits and “believe in protection,” but the state of the world has him even more vigilant.

“I just know that we’ve got to be prepared. … It’s the day we live in now, unfortunately, and we’ve got her to think about,” he said, nodding to his restless, smiling daughter.

‘They do it for fame’

The idea behind CRASE is that the shooters at Columbine, at Virginia Tech, at Fort Hood, at Sandy Hook, in San Bernandino and in scores of other horrific events across the country since the late 1990s aren’t like muggers. They don’t want your wallet or purse.

They want a body count, blood and headlines.

Clifton went on to explain the directives of the CRASE training: avoid, deny, defend — similar to the instructions given to employees January 26 when some kind of shooting event was reported at the Naval Medical Center San Diego. It later turned out to be a false alarm.

“Avoid” means more than run. It’s about knowing where the exits are and visualizing how you’ll get out of a violent situation before one unfolds. Don’t live in fear, but be vigilant, Clifton explained.

“Deny” means taking away a shooter’s chance to kill you, whether it’s by barricading a door, turning out lights, silencing your phone or hiding, preferably behind something that will stop a bullet.

Then there’s “defend,” and that’s where things get tricky, because essentially it means fight. And with a few exceptions, a mass shooter’s targets aren’t soldiers or others who might be trained to fight. They’re regular people: students, coworkers, moviegoers and the like.

“Do not fight fairly. THIS IS ABOUT SURVIVAL,” a handout given to Johns Creek attendees said.

Around 2002, realizing the model used by law enforcement officers who responded to the shootings at Columbine was not effective, schools began requesting “avoid, deny, defend” training. CRASE didn’t become formalized until 2013, hence the uptick in training sessions across the nation, he said.

Blair is a self-professed “data-driven guy,” and there are a couple of statistics regarding active shootings that struck him: The first is that in one out of five incidents, it’s the potential victims who stop the shooters; the second is that more than half of active shooter events are over before police arrive, which, on average, takes three minutes.

“That’s a long time for someone to shoot at people,” he said. “It takes some time for the SWAT team to get there, and during that time, the shooter has free rein to keep murdering people.”

Joel Myrick is familiar with fighting an active shooter. A career educator, he was the assistant principal in 1997 at Pearl High School in a Jackson, Mississippi, suburb when a shooting occurred at the school. The event is considered the first in the almost 20-year rash of mass shootings that continues today.

On October 1 of that year, a 16-year-old who had just stabbed and bludgeoned his mother to death drove to the school and killed ex-girlfriend Christina Menefee and classmate Lydia Dew before shooting seven other students, all in the span of a few minutes. Myrick remembers hearing the shots.

“Being an old Mississippi boy, I’d deer hunted and I knew immediately he had a deer rifle, a .30-(caliber) deer rifle,” he said.

Myrick rushed to his car to retrieve a .45-caliber handgun. When the gunman got into a vehicle, Myrick cut him off at the pass, leveled his weapon and ordered him to stop. The teen swerved off the road and spun out, and the assistant principal was able to “apprehend him at that particular point till police came,” he said.

Now a polymer science instructor at Hancock County Career and Technical Center in Mississippi, Myrick says he can’t say for certain he’d do the same thing if a gunman attacked the kids in his charge today.

“I feel like I would, but I can’t say with certainty,” he said. “My DNA, I would try to do the same thing. That’s my opinion, but I don’t have any way of knowing.”

The reason is because in the “fog of war,” as the former National Guardsman of 21 years puts it, no one really knows what they’ll do.

The CRASE training expands on this notion. Humans are strange, social creatures, Maj. Clifton explained. How one person reacts can dictate how others respond. Humans are also prone to habit, he said.

When the first plane hit the World Trade Center on 9/11, some people took the time to log off their computers and fetch their purses or briefcases before evacuating.

When a fire engulfed The Station nightclub in Rhode Island, where the band Great White was performing in 2003, 100 people died — 58 of them in the main entryway or just outside it, despite there being three other exits in the club.

“If something happens, most of you would exit the door you came in,” Clifton said, pointing to the entrances in the back of the church auditorium.

Another human tendency hampering response in emergency situations is denial, he said.

“The brain doesn’t want to think something bad is happening,” he said.

That delay can put you in greater danger, especially when you consider that as your stress level spikes, along with your heartbeat, your ability to act rationally can be diminished. Once your heart rate hits 150 beats per minute, tunnel vision and audio exclusion can follow, further exacerbating matters.

Reaction is key to survival. At a Marietta, Georgia, CRASE training late last year, police officers shared a diagram showing the classrooms of Norris Hall, where most of the deaths occurred during the 2007 Virginia Tech shooting.

According to the graphic: The first classroom the shooter reached, Room 206, went into traditional lockdown. When it was all over, 10 of the 14 people inside that classroom were killed, while two were wounded. In Room 211, which also went into lockdown when the shots were heard, 12 of 18 were killed and six were wounded.

In Room 205, where a dozen students and faculty got on the ground and barricaded the door with their feet, preventing the shooter’s entry, everyone survived.

“Doing nothing doesn’t work. Doing something does, and these are the statistics to prove it,” Sgt. Todd Hood, a SWAT commander, told the crowd in Johns Creek. “Hide and hope? That’s like a wing and a prayer. … That’s very problematic. That’s not what we teach.”

While you’re awaiting police, look for weapons and be prepared to improvise, he said. A fire extinguisher can be a fine weapon, and there’s power in numbers if a group bumrushed a shooter.

“Pens can do damage,” he said. “If you poke their eyes out, can they see? Probably not.”

Myrick agrees with the approach, and concurs that planning is important.

“I don’t think anybody knows that they will do when it comes to that particular point,” he said. “If you’re not trained to defend yourself, you won’t defend yourself when the fog of war sets in.”

The CRASE teachings, he pointed out, are more about planning than training. Why not take it a step further? Why not tack some balloons to the wall and let kids see how many they can pop with a math book? Why not let them have a go at swinging a chair, just for muscle-memory’s sake?

Myrick worries that because there’s usually no warning when a gunman kicks in a door, “you’ve got to have something right at your fingertips that you can do. There’s no time to do anything.”

He’d also like to see well-trained, armed security personnel in schools. The United States spent billions on nuclear submarines and never fired a shot, he said. It was a mere deterrent. Why wouldn’t we take the same approach to schools, which house “our most prized possessions as parents”?

Chances low, but on rise

To be clear, your chances of being hurt or killed in a mass shooting remain slim. Statistics from 2000 to 2013 show that you have a slightly better chance of being struck by lightning than dying in a random mass shooting.

But the largely 50-and-over audience attending the CRASE training in Johns Creek is not being reactionary when they say the world feels like it’s becoming more dangerous.

Robert Adair, 60, an architect from Peachtree Corners, just south of Johns Creek, said he wasn’t much of a gun guy until someone he knew was shot and kidnapped. While he agrees with the “avoid, deny, defend” philosophy, his primary purpose for attending the CRASE training was to understand his responsibility as a gun owner in an active shooter situation.

“I have a carry permit, and basically I want to find out what I should do or should not do if I find myself at a scene before the police arrive,” he said.

Hood addressed his query during the two-hour session: “Law enforcement officers seldom tell you to grab a gun, but do it here. If they’re bringing violence to you, they don’t matter.”

But once police arrive, Hood said, holster the weapon, get your hands up and promptly let police know that you’re armed.