You don’t have to imagine it, because it happened four years ago on Good Friday in Virginia Beach.

It's called the Good Friday Miracle because when that $29 million machine crashed into an apartment complex and the pilots ejected, no one died.  The ground shook like you wouldn’t believe and resident Pat Kavanaugh woke from his nap to an inferno in his backyard, looking out of his apartment's sliding glass doors. “Explosions were going off, the chances of me losing my life that day were close," he said.

The FA-18 had crashed into a grouping of two story apartments at Mayfair Mews Apartments in Virginia Beach. Those who were there remembered the smell of burning jet fuel and the destruction of 40 apartments right before their eyes.  What Pat Kavanaugh remembers is how citizen heroes came out of nowhere. "It was amazing to see people helping the fire department move hoses, help the residents here, I don’t know where they came from, and a lot of them didn’t live here," he said.

Total strangers helped residents get out of their apartments before they were engulfed in flames.

Mayor Will Sessoms would be the first to call it “The Good Friday Miracle” when he learned that despite the fire and destruction, no one died.

Kavanaugh, who is a former first responder, was the first to find one of the two pilots who ejected from the jet. “We picked the pilot up and brought him to back parking lot here until fire department, and EMS could get on the scene.  He said he was sorry for crashing into our complex,”  Kavanaugh said.

Kavanaugh would later receive a letter of appreciation from the Navy for helping rescue one of the downed pilots.  He said most of the people who lived in the apartment complex when the plane crashed have moved away but strangers come by from time to time to take photos of the empty field where the plane came down and the apartments once stood just to see where the, so called “Good Friday” miracle happened.\

Kavanaugh says he plans to stay at Mayfair Mews, which is now under new ownership. When the Navy jets fly just a little too low for his taste sometimes, he says “come on man….just keep flying.” 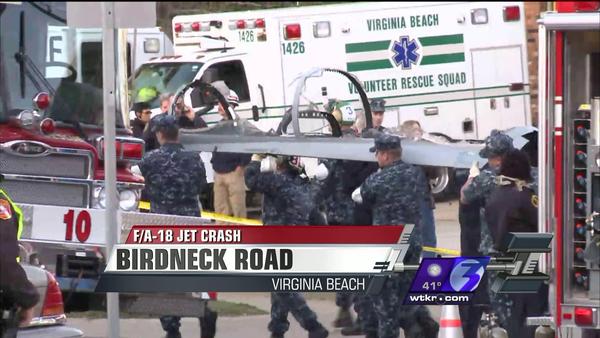