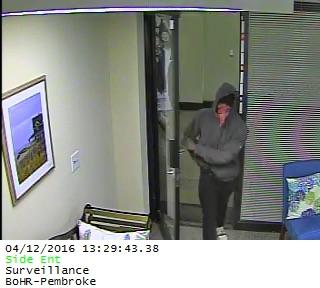 VIRGINIA BEACH, Va. – Police are investigating an armed bank robbery that occurred Tuesday at the Bank of Hampton Roads location at 281 Independence Boulevard.

Police say they received reports of the robbery around 1:30 p.m.

Employees say a black male armed with a handgun entered the bank wearing a red bandana over his mouth and demanded money.

After obtaining money, he fled in an unknown direction.

The man is described as being approximately 6′ tall with a thin build. He was wearing a black or grey hoodie and blue jeans.

Anyone with information on this incident is asked to call the Crime Line at 1-888-LOCK-U-UP.