Tangier Island will be uninhabitable by the year 2050

TANGIER ISLAND – A teenager wanders at dusk, playing pop hits from 2010 on his phone at top volume. Old men speak a dialect similar to Cornish. The mayor has an office in town, but spends his days crabbing on the Chesapeake Bay. In the center of the island stands a massive water tank, a cross on one side and a crab on the other, with the community’s name in the middle: TANGIER.

Tangier Island is home to a way of life that otherwise has all but disappeared. Twelve miles off the coast of the Chesapeake Bay’s Eastern Shore and about 1.2 square miles in size, Tangier can feel like a living historical reenactment. Everyone knows everyone: The same handful of surnames appear over and over again on gravestones and mailboxes.

After church, islanders take bicycles and golf carts to return to their homes. (Photo by Diana DiGangi)

Many of the residents can trace their lineage to the 18th and 19th centuries. Most support themselves by running small businesses or fishing for blue crabs and oysters, which are sold to neighboring Maryland or fish markets in Manhattan.

The 450 or so islanders want nothing more than to earn an honest living on the bay and raise their families in a tight-knit and tradition-minded community. Soon, however, that will no longer be an option. Scientists estimate that Tangier Island will be uninhabitable by the year 2050, as the island is submerged by rising seas.

A waterman shows off his catch of the day. (Photo by Diana DiGangi)

“The bay has always been our way of life, but now it’s our enemy,” said James “Ooker” Eskridge, the island’s mayor.

Jodi Smith, a doctoral student in coastal geomorphology at the University of Virginia, has studied the island’s plight and fears for its future.

“There are three main problems happening on Tangier: rising seas, a sinking island and erosion from the wave action,” Smith said.

“Because Tangier is mostly made of very fine silty sediments that are easily carried away in large storms, rising sea levels and increased extreme weather puts it at risk. It’s like an endangered species, and important to protect. Tangier is a singular example of this culture in the United States.”

Currently, the island is protected by a seawall along its western coast. The rock and cement structure buffers the shore from wave action, preventing the water from eroding away the land. Before the seawall’s construction in 1989, the western coast of Tangier was losing feet of shoreline annually.

While the seawall is effective, the parts of the island with no protection are rapidly disappearing. On the north side of the island, in a section called “The Uppards,” the waves are carrying away vast amounts of shoreline. 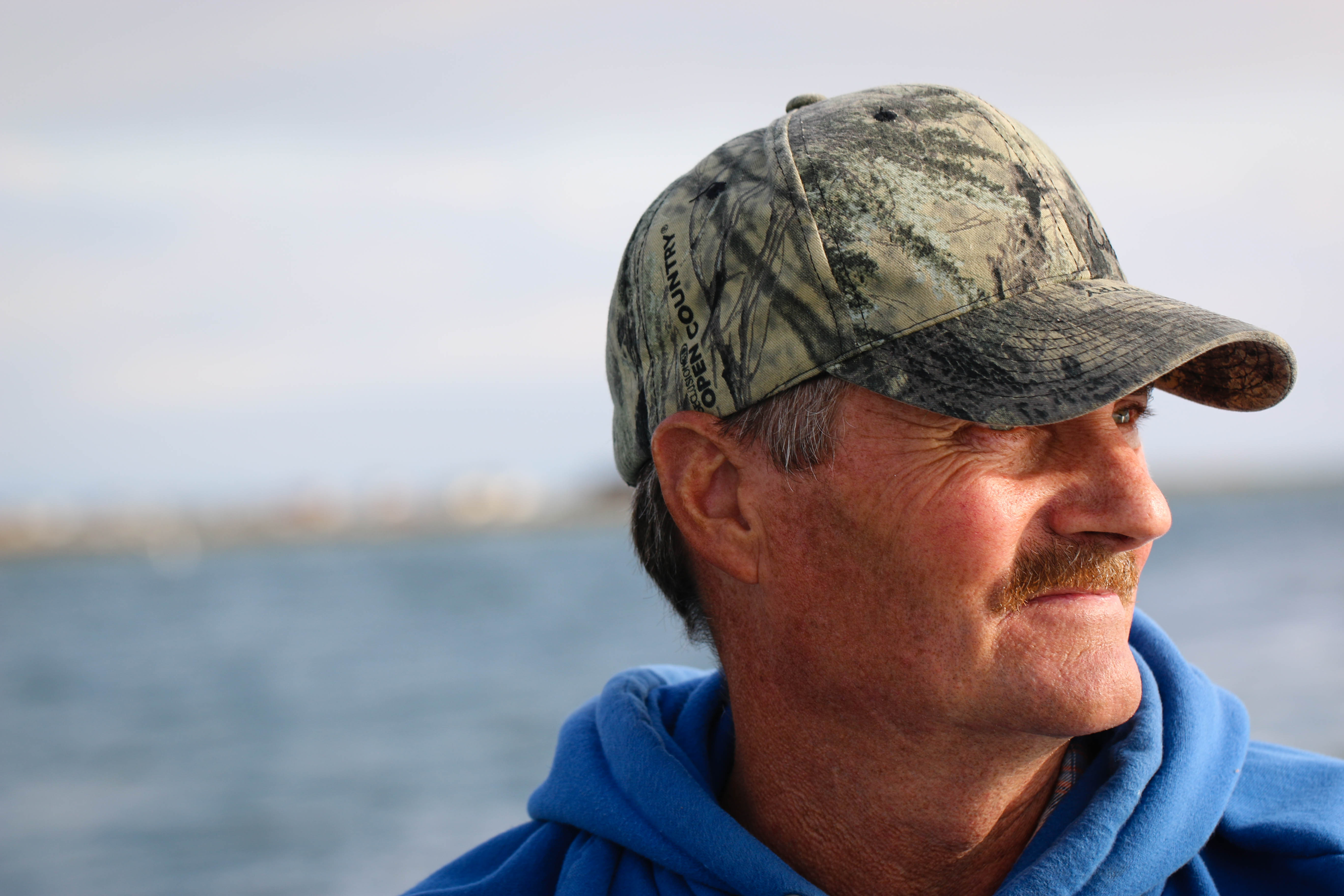 The northern beach is littered with the detritus of a turn-of-the-century community that has since been abandoned. Waves lap at the brick foundations of houses and abandoned grave markers; human bones rise up from under the earth as the island is steadily eaten away.

While the north side of the island is receding the fastest, the town’s people and the U.S. Army Corps of Engineers have decided to focus on protecting the area around the harbor from further erosion. Located at the center of the island, the Tangier harbor has two entrances and is right next to the main drag of homes and small businesses.

In the fall of 2012, then-Gov. Bob McDonnell came to Tangier Island and formally announced plans for building a $4.2 million jetty in the harbor.

The new jetty would be a rock structure on the west side of the island. By enclosing the mouth of the harbor, it would limit wave action on the shores closest to where the main population of Tangier lives, and keep the boat channel clear.

“When the governor and everybody came down and dedicated it, I thought we had it,” said waterman Rudy Shores. “But they came back. They said, ‘We need to study it two more years.’ We don’t have time to lose two more years. Our harbor isn’t safe in a storm.”

Houses that butt up against the marshes of Tangier. (Photo by Diana DiGangi)

The islanders have been watching their island disappear over the past century with little notice from federal and state officials. Residents say it’s hard to reconcile the government’s actions. The state recently funded a new health center and remodeled the K-12 school; state officials also have plans to raise the island’s several bridges. Yet movement on the jetty project has crept along – and recently slowed to a halt.

“People on the island will live 60-70 years, and they will be most concerned with what happens in their lifetimes,” Smith said. “The money for these projects comes from politicians who think in four-year election time spans.”

Tangier residents are disillusioned with the gridlock of politics and are in the right place to be fired up by an outspoken outsider. Many homes around town have Donald Trump campaign signs or banners.

A Trump 2016 flag flies outside of a business. Many on the island support Donald Trump for president. (Photo by Diana DiGangi)

“I think the support for Trump here comes from how a lot of folks are fed up with the government and how it’s working,” Eskridge said. “Both parties don’t like Trump or (Ted) Cruz. The establishment doesn’t like them because they’re not going to go along with the usual way of business.”

Sean Landon, proprietor of the Double Six restaurant on the island, sports a Make America Great Again hat and is outspoken about his lack of faith in the system.

“It seems like the politicians down in Richmond don’t care about us, really. I have very serious doubts about the jetty now,” Landon said. “It needs to happen, but I have serious doubts.”

Besides worrying over rising sea levels, the watermen on the island are frustrated by falling prices for the crabs they catch, as Asian producers compete with the American shellfish industry. The watermen also complain about what they see as overly strict regulations imposed by the General Assembly and other state officials.

“They never listen to nothing we say,” Shores said. “They think we’re trying to get something over on them, but this is our livelihood. We want to protect it. We’re not trying to destroy it. It’s too extreme what they do. Too many laws.”

Their general frustration with the government may explain why the islanders hold little optimism for the proposed jetty. And yet, they can’t imagine a life off the island, and remain determined to stay.

“I don’t have any plans to leave right now,” Landon said. “As long as I can live on this island, I’m going to live here.”

By Diana DiGangi and Margaret Carmel