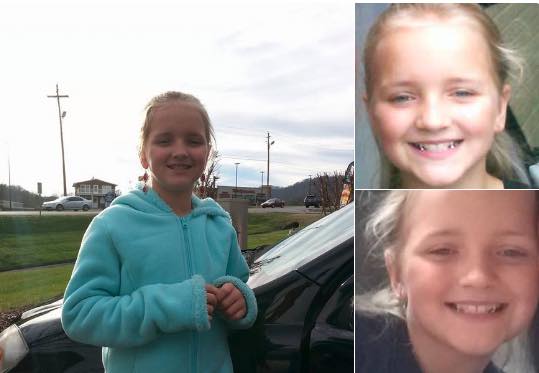 ROGERSVILLE, Tenn. – An AMBER Alert issued for a 9-year-old Tennessee girl remains in effect, over a week after she was last seen.

On the afternoon of May 4, Carlie Marie Trent was picked up from school by her uncle by marriage, 57-year-old Gary Simpson.

Simpson has no custodial rights to Carlie, but he reportedly did have custody of her at one time, while her father was serving time in jail. Investigators say Carlie had been placed back into her father’s custody recently so school officials had not yet been notified.

The Tennessee Bureau of Investigation has released multiple videos from their investigation, including two that show Carlie shopping with Gary Simpson in a Save-A-Lot store in Rogersville, Tennessee on May 4, shortly after Simpson picked Carlie up from school.

Another video shows Simpson shopping at a Walmart in Rogersville, Tennessee and purchasing several items likely for Carlie, including multiple pieces of clothing, a child-sized camping chair, nail polish and lip gloss.

Here are items Gary Simpson purchased, before taking Carlie from her school May 4th. #BringCarlieHome pic.twitter.com/fGuVw7LSsZ

Carlie is 4’8″ tall, weighs 75 lbs with blonde hair and blue eyes.  She was last seen wearing a black and grey tank top and blue jeans.

In another video released by investigators, Carlie is seen playing with her father’s cell phone. Investigators are hoping the video gives the public a better idea of what Carlie looks and sounds like.

Simpson is a 57-year-old white male, 5’10” tall, weighing 157 lbs. He is balding and has brown hair and eyes.  He was last seen wearing a brown cap, a dark colored shirt and jeans. He was last seen driving a white 2002 Dodge Conversion Van with TN registration 173-GPS. The van has a dark stripe down the middle with light gold running boards and paint is chipping off of the hood. Warrants have been issued for Simpson for Kidnapping.

If anyone has information that may prove helpful, they may contact the Tennessee Bureau of Investigation at 1-800-TBI-FIND.

Missing Tennessee girl may be ‘in imminent danger’

Take the news with you wherever you go – click here for info on the NewsChannel 3 News and Weather Apps.