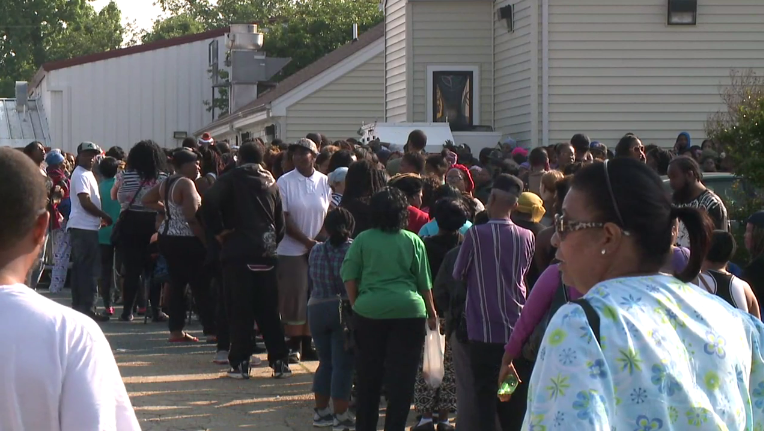 PORTSMOUTH, Va. - Bad behavior and fighting caused thousands of people to be turned away from getting an application for Section 8 housing Thursday morning.

Thousands of people gathered outside of the Salvation Army Center on Airline Boulevard in Portsmouth for the distribution of affordable housing applications.

Some people even waited overnight outside for the 9 a.m. distribution.

However, around 9 a.m., the decision was made to turn everyone away after tensions escalated and fights started breaking out.

The crowds were overwhelming for police and organizers. Over 40 officers were called to the scene.

Portsmouth Redevelopment and Housing Authority leaders said Thursday afternoon they were not expecting that many people from coming out and estimated about 3,000 people were outside the Salvation Army Center at one point.

Kim Howard is one of the mother’s that turned out in hopes of getting a voucher.  She told NewsChannel 3 she is extremely frustrated with the other people who were waiting in line with her that got rowdy.

No one got an application Thursday because the event was canceled before it started.

One witness says there were two women fighting, but police say no one was arrested.

Howard left disappointed.  She said, “I’m not homeless, I just needed the help so I could finish school and get me together.”  She had her infant son with her.

Some people came out last night to secure a place in line.
Eric Atkins said, “I've been out here since 7 o'clock last night and people been standing out here sleeping on the ground and everything. They feel like they need to be in line first.”

According to the Portsmouth Redevelopment and Housing Authority website, applications were on a first come, first serve basis. The application would put a person on a waiting list for Section 8 housing.

Leaders with the agency called the situation unfortunate and said they are sorry the process ended like this.

They said they were not expecting the massive amount of people who turned out.

Over the next several days, organizers will be working to streamline the process and create a completely electronic system.

The last time they held this event was in 2008.

Mayor Kenny Wright sent a text message to NewsChannel 3, saying, "[I am] disappointed in the process and can assure you it will change! I plan to meet with PRHA for a complete briefing! We are better than this!!!"

Atkins said, “I had to call 911 myself because there were so many people out here."

“You had elderly folks out here who really needed it. Young people who live in shelters as you can see I have my little one,” said Howard, “This right here is sad very sad and I pray that they get it together I really do.”

The housing choice voucher program is the federal government's major program for assisting very low-income families, the elderly, and the disabled to afford decent, safe, and sanitary housing in the private market. Eligibility for the voucher is determined by PRHA based on total annual gross income and family size.