US home to nearly a third of world’s mass shootings 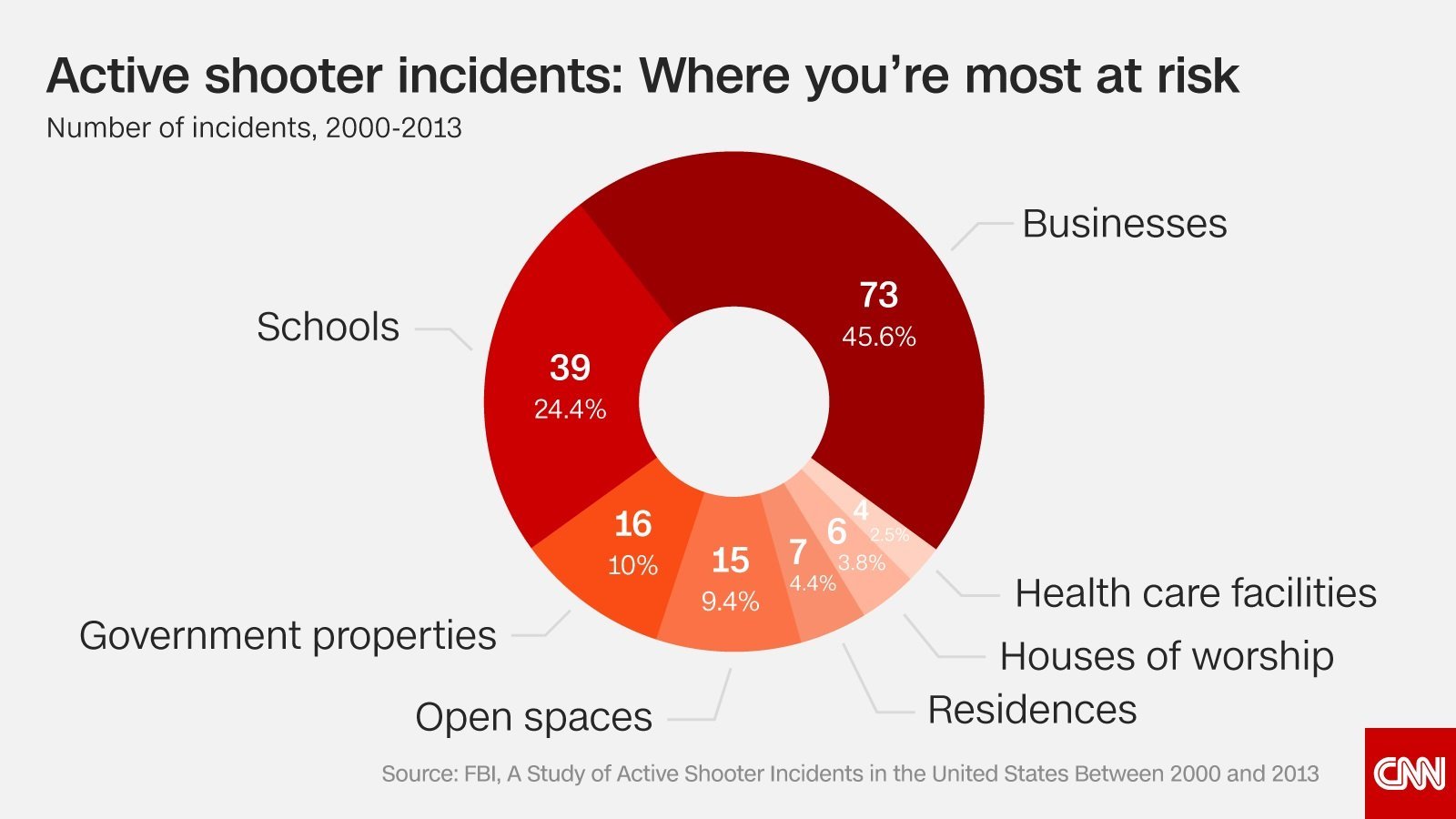 There are more mass shootings in the U.S. than in any other country in the world. Here is a snapshot of this all-too-familiar American reality:

From 1966 to 2012, nearly a third of the world’s mass shootings took place in the U.S. This is according to a 2016 study that used the FBI definition of ‘mass shooting’ below. It surveyed 292 incidents and found 90 of them occurred in America. Put another way: While the U.S. has 5% of the world’s population, it had 31% of all public mass shootings.

The government has never defined “mass shooting” as a stand-alone category. So, depending on whichever informal definition you go with, the tally can drastically vary. According to the Gun Violence Archive, which compiles data from shooting incidents, a “mass shooting” is any incident where four or more people are wounded or killed. That number can include any gunmen as well. By that definition, we’ve seen 136 mass shootings in the first 164 days of this year.

Now, let’s consider the several ways the government uses the term. Federal statutes define a “mass killing” as an incident resulting in three or more deaths. The commonly accepted definition — the one the FBI used up to 2013 — is a shooting that killed four or more people. Then there’s Congressional reports, which sometimes exclude gang-related or domestic incidents and focus on “gunmen who select victims indiscriminately.” Use that, and the total tally dwindles to single digits.

Regardless, the three deadliest shootings in the U.S. have occurred in the past 10 years

According to data from 2013, incidents in schools and businesses represent 7 out of 10 active shootings. Some of the country’s most high-profile mass shootings have occurred there: Sandy Hook, Columbine, Virginia Tech and San Bernardino. Overseas, these incidents typically happen near military installations

Most shooters take their own lives, or are killed

About 70% of active shooter incidents end with the shooter or shooters’ deaths. Unlike a homicide or mass killing, the “active” aspect implies that both law enforcement and citizens have the potential to affect the outcome of the event.

When gun control debates peak, so does demand for guns

FBI data about the number of background checks for gun sales can tell us a lot about the patterns of demand. These patterns tend to rise directly after high-profile mass shootings, when public debates about gun control are high. The highest number of background checks in recent history was recorded following the San Bernardino shootings in December 2015. But 2016 is on pace to break that record.

In fact, Americans own more guns than citizens of any other country

Civilians in the U.S. own about 270 million guns, according to a 2007 report by the Switzerland-based Small Arms Survey. That’s enough to arm every single person in Indonesia, and still have some left over. And it makes America the No. 1 country in firearms per capita. Also, in more than half the American mass shooting cases, the shooter had more than one firearm. In global incidents, the shooter typically had only one gun.

Consequently, the gun business is booming

When demand for guns surge, so, too, does business for gun distributors and manufacturers. Stock for Smith & Wesson surged following the 2015 San Bernardino shooting. In fact, it has risen at a much more dramatic rate in the past eight years than, say, popular tech stocks like Apple and Google.