At least 84 killed, including Americans, after truck plows into crowd in Nice, France 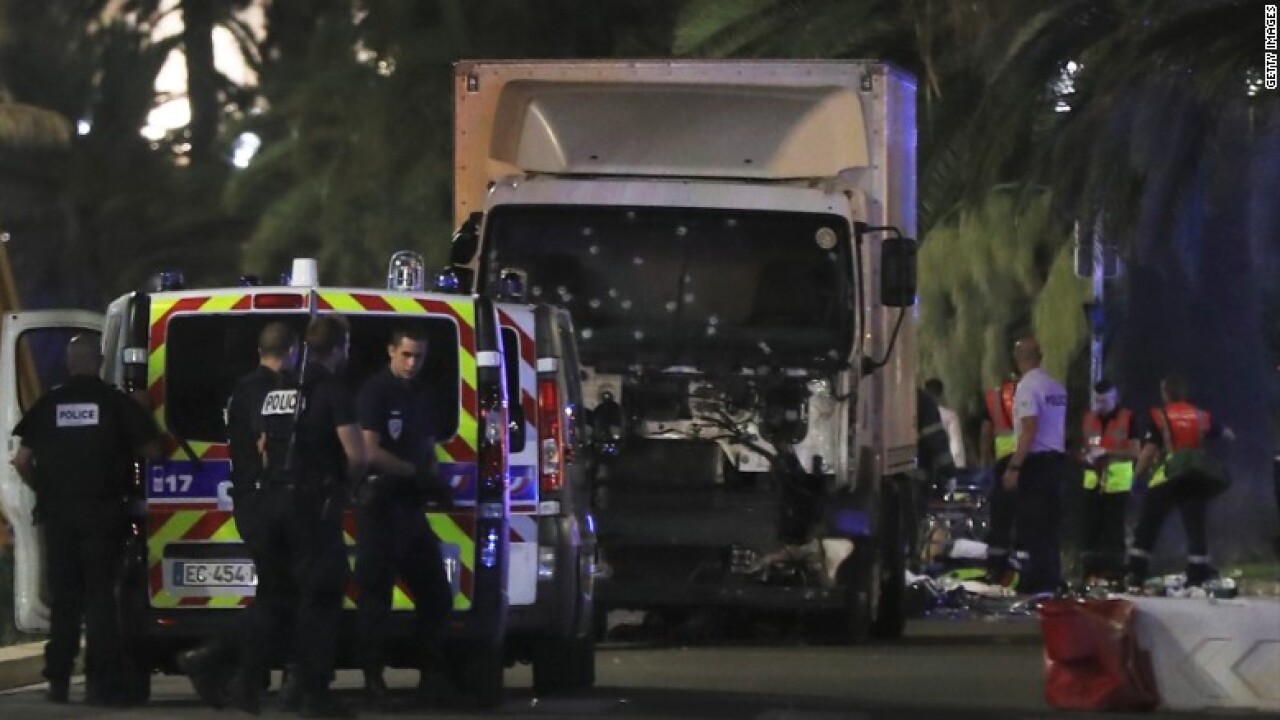 About 50 people are critically hurt as a result of Thursday’s deadly terrorist attack in Nice, French President Francois Hollande said Friday. His comments came at a prefecture headquarters in Nice after he visited some of the victims at a hospital.

“We have an enemy who is going to continue to strike all the people, all the countries who have freedom as a fundamental value,” Hollande said.

He referred to the attack as “an unspeakable act.” He added: “Why Nice? Because it’s a town famous across the world, (a) beautiful town, one of the most beautiful (in the world.) Why the 14th of July? Because it” was Bastille Day, celebrating freedom.

The popular Promenade des Anglais in Nice would normally be packed with tourists and residents on a sunny afternoon in July; but Friday, screens blocked off more than a mile of the famous boulevard as authorities removed bodies and evidence after a man in a truck mowed down revelers at the Bastille Day fireworks.

At least 84 people were killed Thursday night, including several children, authorities said, and more than 100 people were injured, some critically.

And again, for the third time in 18 months, a battered France will fly its flags at half-staff to mourn the victims of yet another deadly terrorist attack on its soil.

The Mediterranean city, popular with tourists for its beaches, restaurants and general ambiance, was left devastated by the horrific attack.

Authorities covered the dead in the street with blue sheets so emergency vehicles could find them for evacuation.

“France has been struck once again in her flesh, on the 14th of July, on the day of our national celebration,” French Prime Minister Manuel Valls said Friday.

The attacker wanted to “harm the very idea of national unity,” he said, adding that France is having to learn to live with regular attacks.

French President François Hollande said Friday at least 50 people were in critical condition, “between life and death,” after he visited some of the victims at a hospital in Nice.

Authorities are attempting to determine whether the identity card of a 31-year-old French-Tunisian found in the truck cab matches the body of the driver in the attack, according to a police source cited by AFP. The driver was a Nice resident, according to the Nice Matin newspaper.

The international police agency Interpol announced on its Twitter account it would deploy a team to Nice “to provide disaster victim identification assistance.”

No group has claimed responsibility for the attack, and not enough is yet known about the driver of the truck to determine if the act had anything to do with religion. A source close to the investigation tells CNN that the assailant was known to authorities for petty crime violations, based on a provisional identification of the attacker. French authorities had not opened a counter-terrorism surveillance file on him and he was not known to them for jihadism or Islamist extremism.

According to witnesses and a blurry cell phone video, the white truck rolled purposefully toward the crowds just after the fireworks display finished. The video shows the vehicle accelerating as people scattered in front of it and a few people chased it from behind.

The truck plowed through the crowds for more than a mile before police were able to intervene and fatally shoot the driver.

On Friday, authorities began searching an apartment block believed to be the assailant’s home, searching for any clue of what may have motivated him.

Just hours before the carnage, hundreds, if not thousands, had gathered on the Promenade des Anglais, which was cordoned off, to watch a colorful display of fireworks and live music.

But as the last firework fizzled, gunfire rang out — authorities and witnesses say the driver shot from the cab of the truck — and the truck accelerated down the crowded street. Among the dead were several children, officials said.

Andy McArdy told CNN he saw the truck driving at high speed along the promenade and the driver “was firing a machine gun while driving.”He said everyone ran, many into a restaurant. “They didn’t know where to go, they were looking for an exit — they were hoping they’d find an exit out the back. They had to stay there for a couple of hours, but people wouldn’t even come out — they were so frightened — until the police came and said it was OK to come out,” he said.

Valls said Hollande had called for three days of mourning, from Saturday to Monday, when public buildings will fly the national flag at half staff. 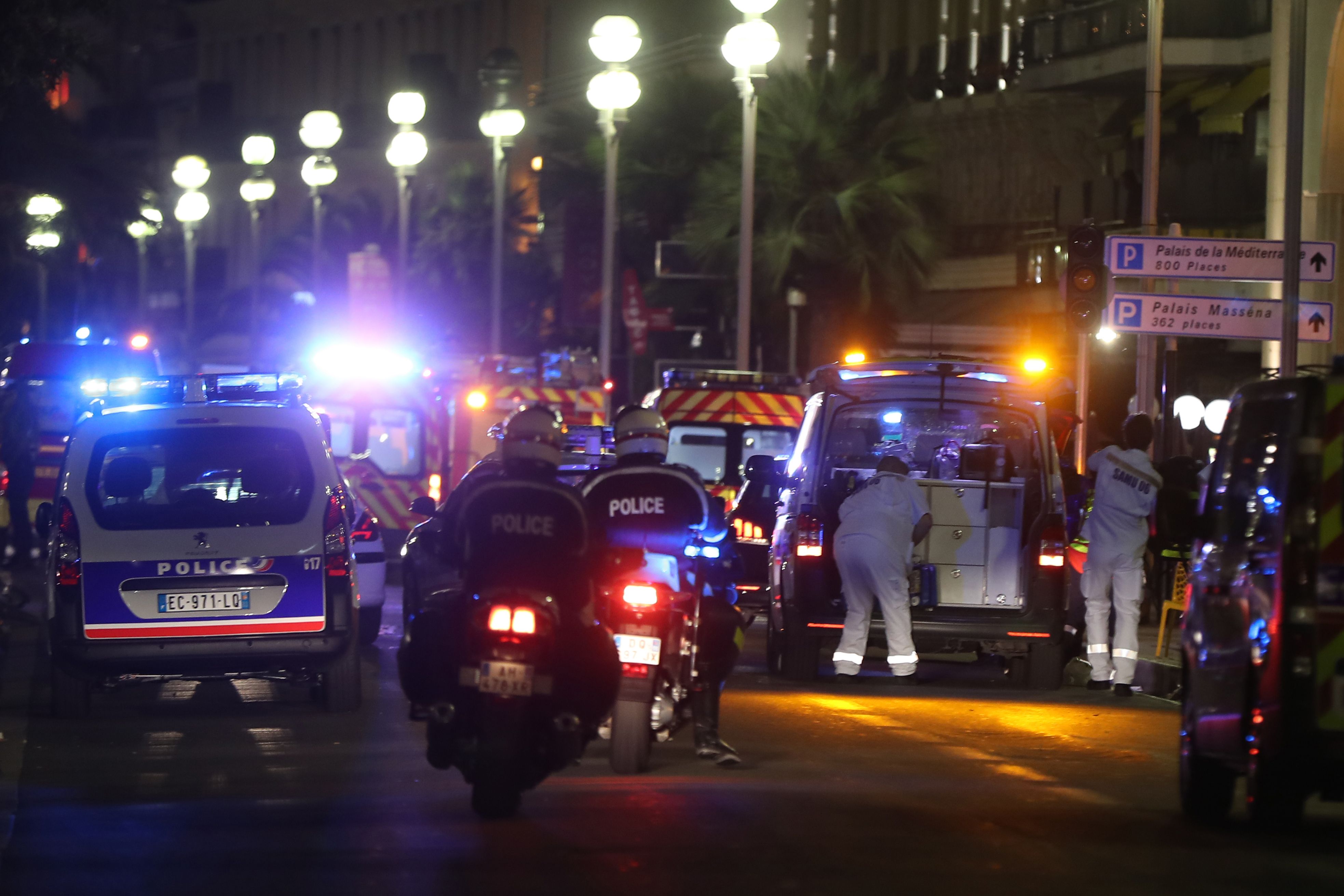 Attack on France’s ‘symbol of liberty’

The country was just about ready to lift its state of emergency, which was put into place in the wake of the November terror attacks in Paris that killed 130 people, the worst attack in the country’s history.

The state of emergency would have expired later this month, but Valls said Friday that a bill to extend it would be submitted to parliament by Tuesday.

In a national address in the early hours of the morning, Hollande said the act was, without doubt, a terror attack.

“France is afflicted, but she is strong, and she will always be stronger than the fanatics who want to strike her today,” he said.

He added that the choice of the day — Bastille Day, when France celebrates its post-French Revolution republic — was particularly poignant.

The day is a “symbol of liberty,” the President said, noting that “human rights are denied by fanatics and France is quite clearly their target.”

Hollande and Valls arrived in Nice on Friday after a meeting of the Security and Defense Council.

Eric Dartell was eating at a restaurant on the street where the attack was launched.

“You can see wreckage all along the way: a body, bicycles, street lamps and debris everywhere,” he said.

American Dominique Molina, who was watching from a balcony, said the fireworks had just ended and the crowd on the beach was dispersing.

“People were flooding the streets, just walking away from the show, and I heard a lot of loud noises and people were screaming and so to the west, a big moving truck was driving on the promenade, just barreling over people and hitting — running people over.” She estimated the truck moved at 20 to 25 mph.

A tourist from Dallas, Kristen Crouch, lamented the climate of violence that spans the globe, from her hometown to the French city, which she was visiting for a friend’s wedding.

“It’s really sad when you’ve been marked safe twice on Facebook in the last week. We shouldn’t live in a world like that,” she said.

France had put intense security in place for Euro 2016, the international soccer tournament that just ended. No major attacks occurred during the event.

While the police response to Thursday’s attack appeared to be speedy, questions are now being raised about how the man was able to breach security at the event.

Authorities found several fake rifles and fake grenades inside the truck, according to BFM-TV reporter Cecile Ollivier. A 7.65 caliber handgun was found on the attacker who was known to authorities for weapons possession crimes, but nothing terror related, according to Ollivier.

CNN terrorism analyst Paul Cruickshank said “no country in the western world is threatened more by jihadis and terrorism than France.”

“This is a big step back here. They are absolutely exhausted after a year and a half of intense efforts to try and protect this country,” Cruickshank said.

“The painful reality here is that if it wasn’t going to be this promenade, it would have been any other promenade.”

Interior Minister Bernard Cazeneuve said he was deploying 70 police, medical and technical specialists in order to make sure that the remains of those killed were quickly returned to the families. Hospitals in the city have launched an urgent appeal for blood donors.

Leaders around the world have denounced the brutal incident.

U.S. President Barack Obama issued a statement saying, “We stand in solidarity and partnership with France, our oldest ally, as they respond to and recover from this attack.”

The United Nations condemned the “barbaric and cowardly” terror attack.

The U.S. Consulate in Marseille advised U.S. citizens in Nice to call family and friends to notify them that they are safe. The consulate said it was working with authorities to determine whether any U.S. citizens were injured.

Are you in Nice? Did you see what happened on the Promenade des Anglais? If it’s ok for you to do so, WhatsApp us on +44 7435 939 154 to share your photos, comments and video. Please tag #CNNiReport in your message.