ACCOMACK COUNTY, Va. - Police in Accomack County say an infant child no longer has any biological parents, after the baby’s father shot his 20-year-old mother, before turning the gun on himself.

According to police, Jonan Gonzales-Funes (27, Bloxom) is accused of murdering the baby’s mother, Madison Jensen (20, Sanford) sometime over the weekend.

Police say Gonzales-Funes was a correction officer at the local jail for nearly two years before his death.

The couple’s remains were found near a vehicle parked at the end Pierce Taylor Rd. early Saturday morning. Police say the couple’s infant child was in the car at the time of the murder-suicide. 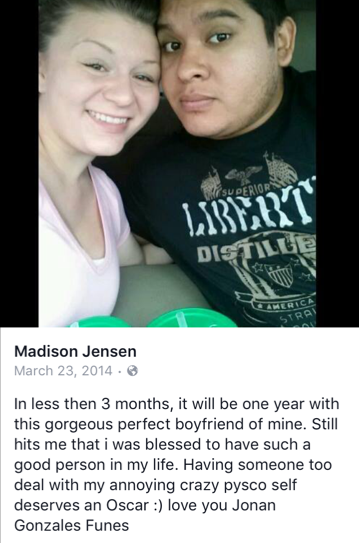 It’s unclear how long the child was left in the vehicle unattended, but friends of the couple tell News 3 other than “a lot of mosquito bites”, the baby is doing ok.

Police say the baby has been released into the custody of other family relatives.

It’s unclear how long Jensen and Gonzales-Funes had known each other, but Facebook photos of the couple suggest they had begun dating sometime during the summer of 2013.

The case is still under investigation. Anyone with information is asked to call the Accomack County Sheriff's Office at 757-787-1131.

Neighbors tell me this is where the murder-suicide couple was was found. https://t.co/IQyXvIngKc @WTKR3 pic.twitter.com/1u39k7gxNc