Meet Graham, a ‘human’ designed to survive a car crash 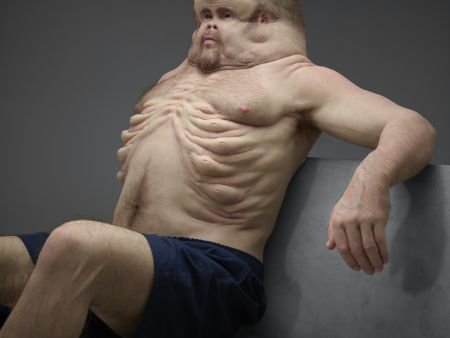 To up your chances of surviving a car accident, it would help if your ultra-thick rib-cage were lined with sacs that served as natural airbags and if your face were flattened, your skull much larger, your skin thicker and your knees able to move in all directions.

There’s only one “human” in the world who possesses all these unnatural characteristics and more.

“This is an artwork, and it needs to connect with the audience on an emotional level while still communicating some very serious ideas,” Piccinini said. “The idea is to stimulate conversation and questions rather than tell people what to think or feel.”

Graham is designed to serve as a reminder of how vulnerable our bodies are in high-speed, high-impact motor vehicle crashes.

“It’s really about understanding the physics behind road crashes, and (Piccinini) did a fantastic job of interpreting that and creating something that is really able to be digested by anyone from what is some quite complex physics,” said David Logan, a crash investigation expert at the Monash University Accident Research Centre in Melbourne.

Logan and Christian Kenfield, a trauma surgeon at Royal Melbourne Hospital, advised Piccinini about how the body responds in a crash and discussed the possible ways to enhance the human body to make it more resistant to impacts.

Some of Graham’s features include a flattened face to absorb the energy of an impact and a larger skull with more cerebrospinal fluid and ligaments to better protect his brain.

Graham is even able to avoid injury while on foot: He has hoof-like legs with added joints and knees that bend in all directions to quickly move out of the way of oncoming traffic.

All of Graham’s unique features can be explored at Meetgraham.com.au, a 360-degree interactive tool.

Joe Calafiore, CEO of the Transport Accident Commission, is confident in the investment. The sculpture cost about a 10th of a traditional campaign, and Graham has sparked an international conversation.

“Graham is going to outlive us all,” Calafiore said.

Graham is on display at the State Library of Victoria until early August, and then he will be going on a road show throughout the state. As for now, there are no plans for him to travel internationally.