California wildfires evacuee: ‘It was raining fire from the sky’

Fanned by scorching heat, windy conditions and a five-year drought, a pair of California wildfires has burned tens of thousands of acres in Southern and Central parts of the state.

In Southern California, the so-called Sand Fire has set more than 37,000 acres of the Santa Clarita Valley ablaze. The fire was 25% contained as of Tuesday morning, according to the Los Angeles County Fire Department.

One person has died in the blaze, at least 18 homes have burned and 20,000 residents had been evacuated, according to fire authorities. On Monday evening, the fire department announced that most of the residents of the evacuated areas have been allowed to re-enter the area.

Temperatures hit 101 degrees in the area and dried brush from the parched, drought conditions have helped to spread the fire to about 57 square miles — a size that is bigger than the city of San Francisco (which is 47 square miles).

Towering columns of smoke could be seen from miles away, highlighting the dangers of the Sand Fire, named for the area’s Sand Canyon. Ash rained down and red skies became the backdrop. 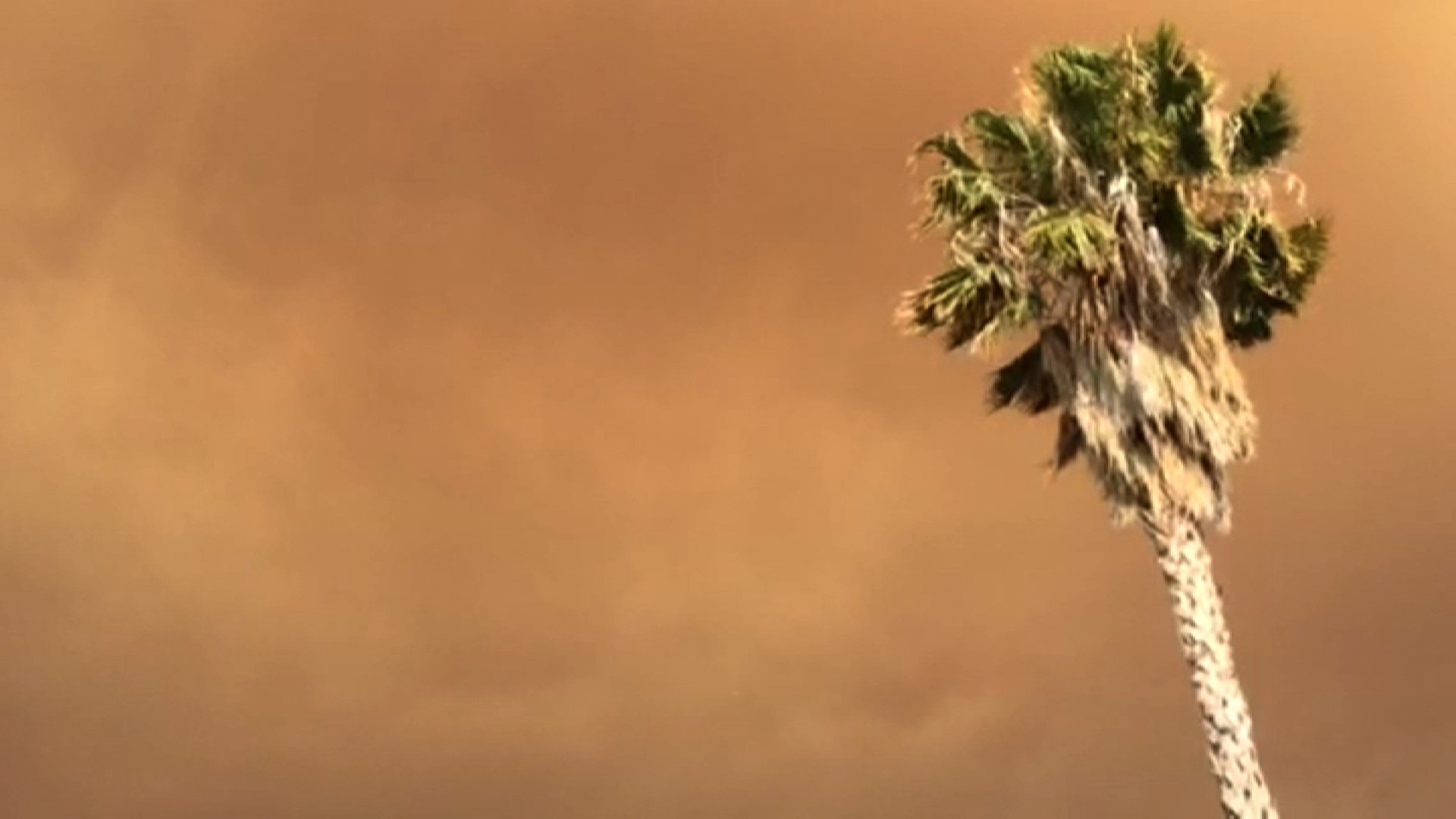 The extent of the fire’s damage could be seen from satellite images that showed the burn scars left on the hills and canyons.

The wildfire broke out Friday afternoon and quickly spread about 10,000 acres a day.

A man’s body was found in a burned-out car near one neighborhood where a home was singed. Detectives were trying to determine whether the man was killed by the blaze or another cause. According to the Los Angeles County Sheriff’s Department, there was no indication his death was a criminal event. The man’s identity is so far unknown.

Of the 18 homes destroyed, three of them belonged to firefighters and four of the structures had been occupied by Forest Service employees, reported CNN affiliate KABC-TV in Los Angeles

The fire also burned parts of the Sable Ranch, where many movies and TV shows were shot, reducing film sets to charred piles of burnt wood and metal. Productions that used the ranch included “The A Team,” “Invisible Man” with Chevy Chase,” “Terror From Above” and “Robin Hood: Men in Tights,” according to the ranch website.

“It tore through here in a blink,” Derek Hunt manager of the Sable Ranch told CNN.

Hunt stood atop a ridge looking over canyons filled with film sets.

“I’ve been so busy it hasn’t hit me what we lost, all this history,” he said, swallowing hard in 100 degree choking heat. “I’m going to rebuild. We have to.”

Challenges in fighting the flames

Helicopters circled the blaze, dousing flames with water. Cal Fire helicopters flew back and forth between the ocean, where they collected water, and the Santa Clarita area, where they dumped the water on the fire lines.

After spotting drone activity in the fire area, authorities warned that the small aircraft could interfere with firefighting efforts and issued a FAA temporary flight restriction.

A smoke advisory warning of the unhealthy air quality in portions of the Santa Clarita Valley and the San Gabriel Mountains has been issued. The local air pollution control agency warned that people in the areas affected by smoke should avoid vigorous outdoor or indoor exertion.

There are also concerns that the shifting wind could exacerbate the fire, as they are expected to remain in the 25 to 30 miles per hour range Monday night, reported KABC. But the winds are expected to weaken into Tuesday.

Firefighters in central California are grappling with similar challenges in another major wildfire.

That blaze in Monterey County, called the Soberanes Fire, has burned more than 19,000 acres along the California coast between the scenic areas of Carmel and Big Sur. The fire is bigger than the size of Manhattan.

Firefighters have contained 10% of the fire, which began Friday, according to Cal Fire.

Oliver Bates has spent the last three nights at a Red Cross shelter after fleeing his home. He told CNN affiliate KSBW, which is based in Monterey, that he had tried to save his house from the fire.

“I only left when it got really bad,” Bates said. “It was raining fire from the sky.”

He still didn’t know what happened to his house.

Bates is one of the 300 residents who’ve left their homes as mandatory evacuations have been issued in several communities, including the Palo Colorado neighborhood, which sits between Carmel and Big Sur, as well as southern portions of the Carmel Highlands area. No injuries have been reported as 2,305 firefighters tried to get control of the fire.

The wildfire made its relentless march down the central coast, destroying at least 20 homes.

The smoke from the fire could be seen in Silicon Valley (about a hundred miles north) and Lake Tahoe (about 300 miles east). Air quality health alerts have been issued in the regional areas.