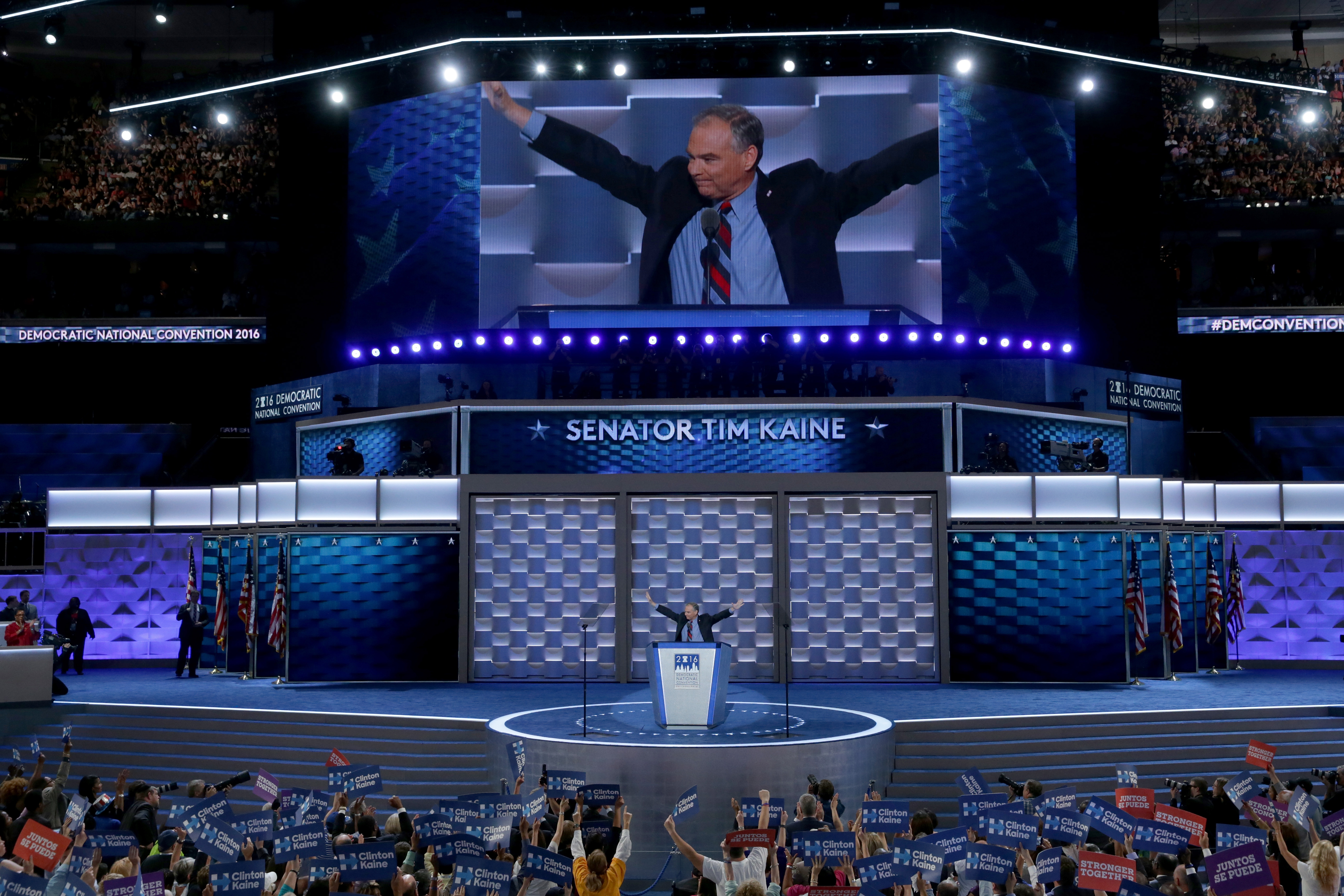 PHILADELPHIA, Pa. – Tim Kaine, born in Minnesota 58 years ago to a father who was an ironworker, introduced himself to the country Wednesday night as Hillary Clinton’s running mate and vouched for her character, saying: “I trust Hillary Clinton.”

Kaine’s prime-time speech on the third night of the Democratic National Convention marked the Virginia senator’s most consequential of his career as he formally accepted the Democratic Party’s nomination for vice president.

“For my friend Hillary Clinton, I humbly accept my party’s nomination to be vice president of the United States,” he said. “Can I be honest with you about something? I never expected to be here.”

In remarks highlighting his humble roots and years of public service, Kaine described to American voters how his life had prepared him for the job of vice president — and president.

“I was born in Minnesota and grew up in Kansas City. My folks weren’t much into politics. My dad ran a union ironworking shop … and my mom was his best salesman,” Kaine said. “My parents, Al and Kathy, here tonight and going strong — they taught me about hard work, and about kindness, and, most especially, faith.”

In a packed arena, Kaine — iwith an ‘aw shucks’ delivery — repeatedly defended Clinton’s character, offering a preview of one of the arguments he is expected to repeatedly make on the campaign trail throughout the general election: You can trust her.

Kaine continued: “Remember Karla, the little girl we heard from on Monday who was worried that her parents would be deported? Karla said she trusts Hillary to keep them together. And remember the Mothers of the Movement last night? They said they trust Hillary to keep other mothers’ sons and daughters safe.”

Kaine made his case in part by drawing a sharp contrast between Clinton and the Republican nominee, Donald Trump.

“You know who I don’t trust? Donald Trump. The guy promises a lot. But you might have noticed, he has a habit of saying the same two words right after he makes his biggest promises,” he said, then repeated the Trump catchprase “believe me.”

Known for his unassuming and low-key persona, Kaine appeared determined to prove Wednesday that he is capable of playing the role of attack dog.

And just as he did in Miami over the weekend, where Kaine and Clinton campaigned for the first time as running mates, the Virginia senator dipped in and out of Spanish several times in an overture to Latino voters.

“When I lived in Honduras, I learned that the best compliment you could give someone was to say they were ‘listo’ — ready,” he said. “Because what ‘listo’ means in Spanish is this: it means prepared, it means battle-tested, it means rock-solid, up for anything, never backing down. And friends, Hillary Clinton, she’s ‘lista.’ Hillary Clinton is lista.”

Kaine’s record is one of a pragmatic, even cautious leader. He was well-liked, but known more for his electoral success than his legislative record. And his understated persona is a departure from the traditional attack-dog persona many presidential candidates seek.

Responding to those who have spoke less than kindly about his demeanor, he told “Meet the Press” in late June, “They’re true. I am boring.”

But Kaine’s long-time friend and fellow senator Mark Warner said Tuesday that his fellow Virginian’s tone and tenor make him the perfect antidote to GOP nominee Donald Trump — something that Warner believes will be on display in his speech.

“I think you’ll see somebody whose basic humanity and decency will come through,” Warner said in an interview with CNN. “And in a world where we have too much politics of personal destruction, I think that will be a pretty refreshing sign for an awful lot of folks.”

Kaine’s record as a public speaker is somewhat uneven. His first major speech in front of a national audience was when he gave the Democratic rebuttal to George W. Bush’s State of the Union in 2006. He drew a lukewarm assessment — “The Daily Show” mocked Kaine’s nervous habit of arching his eyebrow, something that Kaine’s political team would later turn into a graphic on t-shirts and buttons.

Perhaps Kaine’s most memorable speech came after the Virginia Tech shooting. Then the governor of the state, he struck an emotional and powerful chord at a time when his entire state was in mourning. Shortly after the speech, his approval rating as governor was near 80%.

He wasn’t able to keep up the sky-high number after that, however. His governorship was hit hard by the great recession, which led to massive budget shortfalls and standoffs with the Republican-led General Assembly. Term-limited in 2013, he left office with an approval rating under 50% and Republicans swept all three statewide offices in the race to replace him.

Despite his lagging poll numbers, Kaine remained in the public eye through his role as DNC chairman. When Sen. Jim Webb decided not to run for re-election, Kaine jumped into the race. Running arm-in arm with President Obama in 2012, Kaine was swept into office, outperforming the President in Virginia. During his time in the Senate, he has enjoyed healthy favorable ratings, part of the reason the Clinton decided to add him to the ticket.

He also has had his moments as a speaker. The day Barack Obama officially received the Electoral College votes that would earn him the presidency, Kaine gave a passionate speech about racial reconciliation in the Virginia State Capitol beneath a statue of Confederate Gen. Robert E. Lee.

“He wrote every word of that speech himself and was particularly proud of the way it was received,” former personal aide Beau Cribbs said. “He puts a lot of effort into every speech, but when there is a lot on the line, he seems to take it to another level.”

And he has found a way to be different. Early during his tenure in the Senate, Kaine became the first member to deliver a floor speech entirely in Spanish. The address was a pitch for comprehensive immigration reform and displayed a skill that turned out to be an important asset in the Clinton selection process.