Officials told WTVR said the plane was attempting to land at the airport at 12:26 p.m. when it came to the end of the runway and pulled back up.

“The plane made it beyond the railroad tracks at the end of the airport property, banked left and struck the tree line,” Virginia State Police Public Relations Director Corinne N. Geller said. “The plane crashed in the trees and immediately caught fire.”

Investigators say a total of six bodies were recovered from the burnt wreckage of the plane Friday afternoon.

All the remains were transported to the Office of the Chief Medical Examiner in Richmond for positive identification.

According to WTVR, the pilot of the plane has been identified as 64-year-old William C. Hamerstadt of Carmel, Indiana. The passengers were the plane’s owner, 73-year-old Robert D. Ross from Louisville, Kentucky, as well as 52-year-old Lisa K. Borenstein, 19-year-old Luke J. Borenstein and 15-year-old Emma R. Borenstein. The Borensteins were from of Shelbyville, Indiana. Additionally, 15-year-old Maren Timmermann, who was from Berlin, Germany, died in the crash. 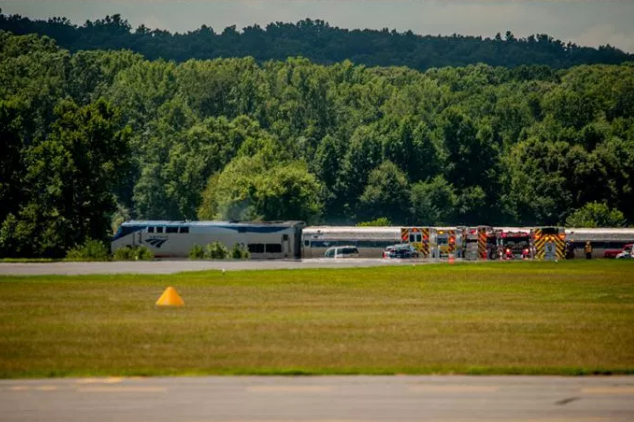 Twitter user Tanya Aquino tweeted a photo of a fire in the woods outside Fredericksburg while she rode on Amtrak from Washington to Richmond.

“Oh no! I’m on Amtrak from DC to Richmond and a plane has crashed. I have no idea what type but hope people are ok!!?!” she wrote. “Plane looks small but the fire is still going. Praying for anyone involved.”

Plane looks small but the fire is still going. Praying for anyone involved. pic.twitter.com/o8vzznd5Ev

Officials are working to determine what caused the crash.