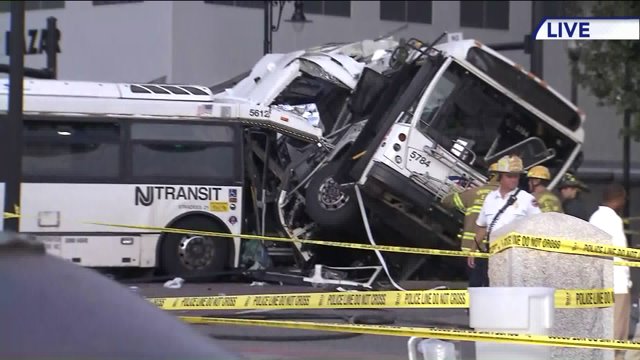 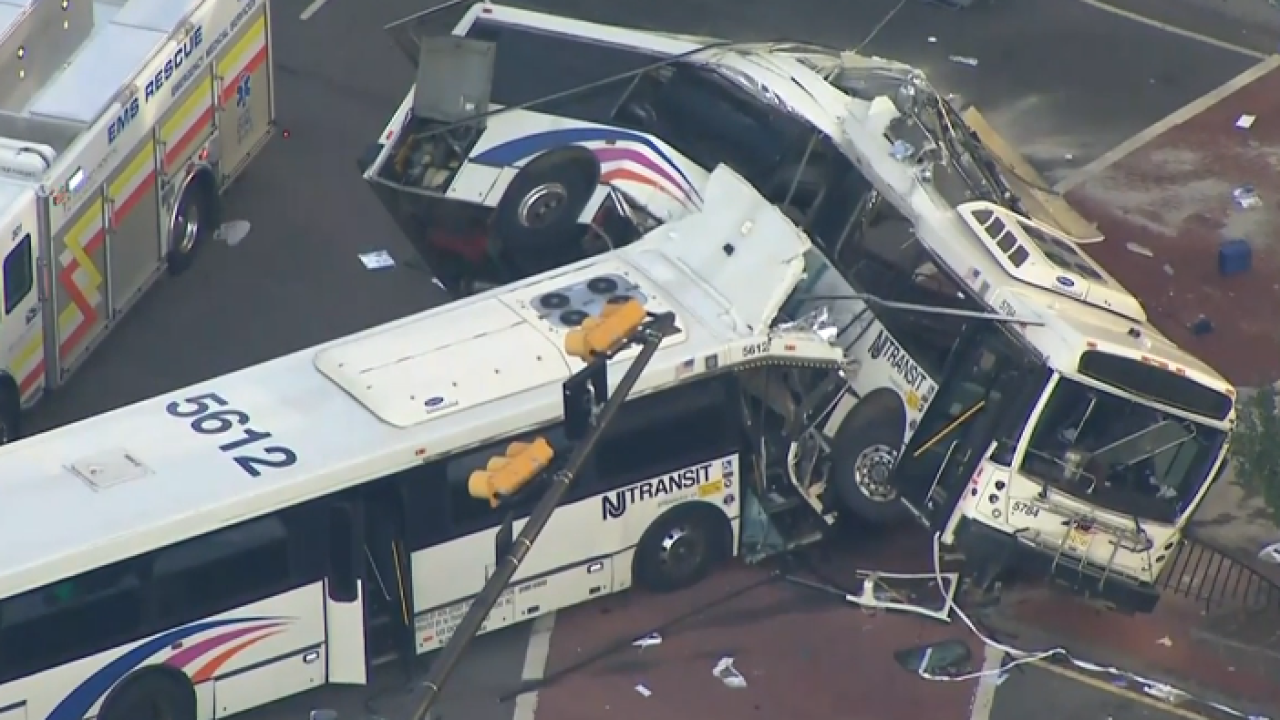 NEWARK, N.J. — A New Jersey Transit driver was killed and 19 people were hospitalized, including seven in critical condition,  when two buses collided, forcing one to flip over and apparently be partially split in half at a Newark intersection Friday morning.

A No. 59 bus driver was traveling westbound on Broad Street with no passengers onboard when it T-boned the No. 13 bus going north on Raymond Boulevard with about 20 passengers onboard, according to a NJ Transit spokesperson.

The official initially reversed the directions in which in buses were traveling, officials said.

The driver of the No. 59 bus was killed in the crash and several passengers were hurt, NJ Transit said.

"By the grace of God, we're praying for all of the folks that are in the hospital, that they get a speedy recovery from this tragic accident this morning," Baraka said at a morning news conference.

Multiple ambulances and fire engines were at the scene, and an apparent triage center was established at a nearby center median where several people were seen lying on the concrete as they were treated by medical officials.

Two bus drivers who were near the crash, but not involved, stopped their vehicles when they saw it.

They witnessed about 20 people being removed from the wrecked buses.

"It's devastating," one driver said. “People just need to respect the road. Take your time, be late. You are where you’re supposed to be at the time you’re there because that’s where God had you."

The second driver said she believed one of the buses had ran a red light.

Baraka confirmed the allegation was being investigated.

The buses involved appeared to be Nos. 5612 and 5784. According to NJTransit.com, 5612 was heading from New York City to Orange and 5784 was driving from North Arlington to Newark Penn Station.

Several NJ Transit bus lines are facing delays and detours because of the deadly crash.

"We have to make sure we clean up what's happening down here and we have to clear the street and make sure business goes on as usual," Baraka said. "We're going to be out here for some time. It's going to be difficult getting to work this morning."

An official with the National Transportation Safety Board said the agency is not investigating the crash.

Essex County Prosecutor's Office is investigating, and officials are at the scene.