SALETTA, Italy (CNN) — In the Italian village of Saletta, a tiny settlement of about 20 people, residents used their bare hands to ferret through the rubble of a two-story home in a desperate search for neighbors.

They called out names as they dug through the remains of a bedroom. Rescue dogs sniffed and clawed through the debris, with no signs of life.

The scene played out over and over after a strong, shallow earthquake devastated towns in central Italy early Wednesday, killing at least 159 people and placing rescuers in a desperate race against time to try to pull survivors from the rubble.

As night fell, some villagers placed chairs near homes reduced to piles of rubble. Covered in blankets, they sat patiently and vowed to be, at the very least, present when the remains of loved ones were discovered.

“Many cases have shown in the past that even after two days people can be rescued alive,” he said. “So we want to continue.”

CNN’s Barbie Nadeau and her crew escaped injury when a home collapsed behind her in Saletta as she did a Facebook Live session.

With heavy lifting equipment just starting to reach the isolated village, people used tractors, farm equipment and simple hand tools to break through what was left of old stone villas.

Many settlements are only accessible by small roads, posing a challenge for authorities to move in heavy machinery to the disaster sites.

On a roadside, stunned residents in dust-covered pajamas sought comfort after every aftershock.

Italy’s Civil Protection agency said of the people killed in the 6.2 magnitude quake, at least 53 of them were in the town of Amatrice, and at least 100 people were injured. Other fatalities were reported in the nearby towns of Accumoli and Arquata del Tronto.

Italian Prime Minister Matteo Renzi said “there are at least 120 lives cut short at this time,” following the earthquake, according to national news agency ANSA.

‘Are you able to breathe?’

Many survivors have been pulled from the rubble alive.

Locals in Accumoli described working furiously to free two people trapped in a collapsed home, moving stone by stone with their hands. They managed to pull out one person. A fire unit finally reached the site after three hours and freed the remaining survivor.

Italy’s State Forestry Corps tweeted footage of a rescue operation underway in the rural town of Capodacqua, where a woman’s arm can be seen beneath the debris.

“Are you able to breathe a bit?” asks the rescuer.

“Only a bit,” says the woman, who is reassured that help is on the way.

The death toll is expected to rise as rescue teams work through the rubble, with regular aftershocks posing a continuing threat.

More than 1,000 people have been displaced by the quake, and the Civil Protection agency says no residents will be allowed to sleep in the devastated town of Amatrice tonight.

Addressing the nation Wednesday, Renzi vowed to spare no effort in the critical window following the quake when lives could still be saved.

“In difficult times, Italy knows what to do,” he said.

Amatrice ‘is no more,’ says mayor

The towns at the epicenter of the quake — Amatrice, Accumoli and Arquata del Tronto — are now scenes of devastation, with what were once charming three-story buildings pancaked by the disaster.

Aerial footage released by Italian state police showed widespread devastation, with only some structures left standing. Much of the housing in the area — unreinforced brick or concrete frame buildings — were vulnerable to earthquakes, according to the US Geological Survey, and offered little resistance to the powerful temblor.

Amatrice, a town of about 2,000 people in the north of Italy’s Lazio region, is in ruins. But amid the rubble, the town’s clock tower stood tall, with the clock stopped at the exact time the quake struck.

The towns, situated amidst remote, mountainous terrain, are particularly popular in the summer months with tourists seeking a scenic getaway from the heat of the city.

Red Cross spokesman Tommaso della Longa said the fluctuating population during the vacation season made it hard to know exactly how many people might be trapped in the debris.

Amatrice, known for its traditional all’amatriciana pasta sauce, had been gearing up to hold a festival celebrating the pork jowl, chili and pecorino recipe this weekend, with many visitors expected.

Michael Gilroy was sleeping on the second floor of a building in central Italy when the quake rattled him awake.

“It felt like the bed was on rollers,” he told Rai. “We all immediately ran out.”

When he decided to venture back in, “the ceiling was very audibly creaking.”

All around, residents have joined together in frantic rescue attempts to try to save their neighbors, improvising with whatever equipment they have at their disposal.

A 65-year-old man told CNN he escaped his home in his underwear. Outside, residents searched for survivors.

“I heard people asking for help … but in this condition, what can I do?” the man said.

In Amatrice, rescue workers have been targeting their efforts by calling the cellphones of missing residents, and trying to reach those who answer. If there is no answer, rescuers move on to the next person. 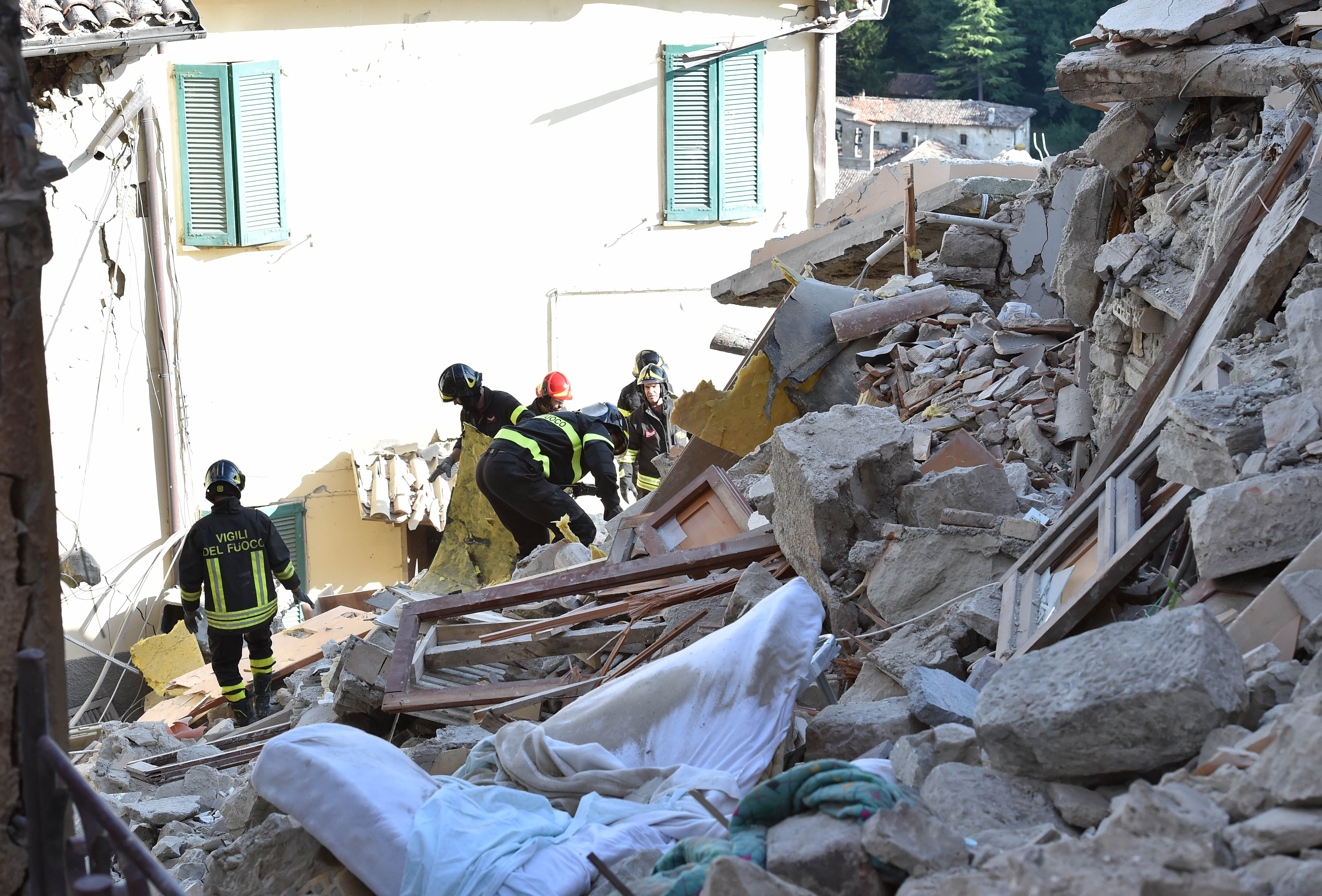 Emma Tucker, deputy editor of British newspaper The Times, was in Italy’s Marche region, about 85 kilometers from the epicenter, when her house started “trembling, shaking… an absolutely appalling noise.”

“It felt like someone had put a bulldozer over the house and was trying to knock it down,” she told CNN.

Eleonora Romendini, who was also in the Marche region, said she was uncertain whether to remain in her home after the quake. But after the third powerful aftershock she decided to run outside to the street, alongside stunned neighbors.

“It was very shocking,” she said. “We were very scared.”

The powerful jolt was felt as far away as Rome, 100 miles from the epicenter.

“It lasted for at least 30 seconds. The entire hotel was shaking,” said Charlotte Smith, coach of Elon University women’s basketball team in North Carolina, who was in Rome with her players when the quake hit.

“It was pretty terrifying,” she said.

The university released a statement later, saying the team was headed back to Charlotte, North Carolina.

“The team was in Rome last night and early this morning and felt the aftershock of the 6.2-magnitude earthquake in central Italy. The team sends its condolences to those affected by yesterday’s earthquake,” the statement said.

Pope Francis called for prayers for those affected by the disaster while Italian President Sergio Mattarella said “the entire country should rally with solidarity around the affected populations.”

“At the moment we need to employ all our forces to save human lives, treat the injured and ensure the best conditions for the people displaced,” he said.

White House spokesman Josh Earnest said Obama offered his thoughts and prayers to the people of Italy and “saluted quick action of first responders.” There was no information on any Americans who may have been injured or killed in the quake, Earnest said.

The leaders of France, Germany and Russia all expressed their sympathy over the disaster, while the Italian Voluntary Blood Association made an appeal for people to donate blood to help treat those affected.

Italy is no stranger to deadly quakes. In May 2012, a pair of earthquakes killed dozens of people in northern Italy, while in April 2009, a 6.3-magnitude earthquake hit in the Aquila region of central Italy, killing 295. The earthquake Wednesday struck an area close to the 2009 earthquake.

Are you in Italy? Are you affected by the earthquake? If it’s safe for you to do so, WhatsApp us on +44 7435 939 154 to share your photos, experiences and video. Please tag #CNNiReport in your message.