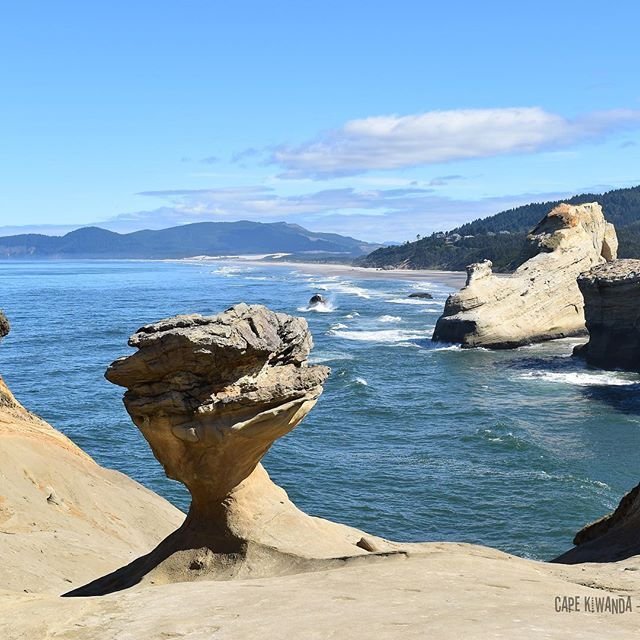 For years and years, the sandstone pedestal on the Oregon coast was a tourist attraction, a perfect photo-op for its uncanny likeness to a duck’s bill.

So when officials found the beloved 7-foot-tall formation at Cape Kiwanda broken into a million pieces, they initially thought that age and gravity had done it in.

But then, a video emerged that pointed to the true culprit: vandals. More specifically, a group of people who crossed into the roped-off area and pushed and shoved the rock until it toppled over.

Now, the search is on for the offenders.

Last week, Oregon State Parks posted a before and after shot of the rock on Facebook when the park first discovered the destruction.

“So this happened. The iconic sandstone formation at #CapeKiwanda–some called it the Duckbill–has collapsed. No one was injured, fortunately; but the rubble serves as a sobering reminder of the ever present dangers of our fragile coastal rocks and cliffs. Who knows what will collapse next?#gravitywins #besafe,” the post said.

Soon after, a drone operator posted a video of the vandalism.

“I kind of laughed to myself cause I thought there was no way that they could knock it down but then I noticed that it started wobbling and then I started to record it as two of the guys manged to knock it down,” David Kalas told CNN affiliate KATU.

Kalas said when he confronted the group, they said they knocked the rock over because a friend had broken a leg on it.

“They basically told me themselves that it was a safety hazard, and that they did the world or Oregon a favor,” Kalas told the station.

The vandals have yet to be identified but a pair of boyscout leaders faced charges for criminal mischief after toppling over a rock formation in Utah in 2014.

Authorities say they are reviewing the Oregon incident to determine how best to respond. “The department takes vandalism of a state park’s natural features seriously,” Chris Havel of Oregon State Parks told CNN.

Breaking park rules are violations, rather than crimes, and in this case carries a fine of $435, Havel said.

The Oregon State Police will determine if criminal charges are filed once the vandals are identified.