Savvy Shields, representing Arkansas, walked away as the new Miss America 2017 at the end of Sunday’s pageant.

Here are five highlights from the show. 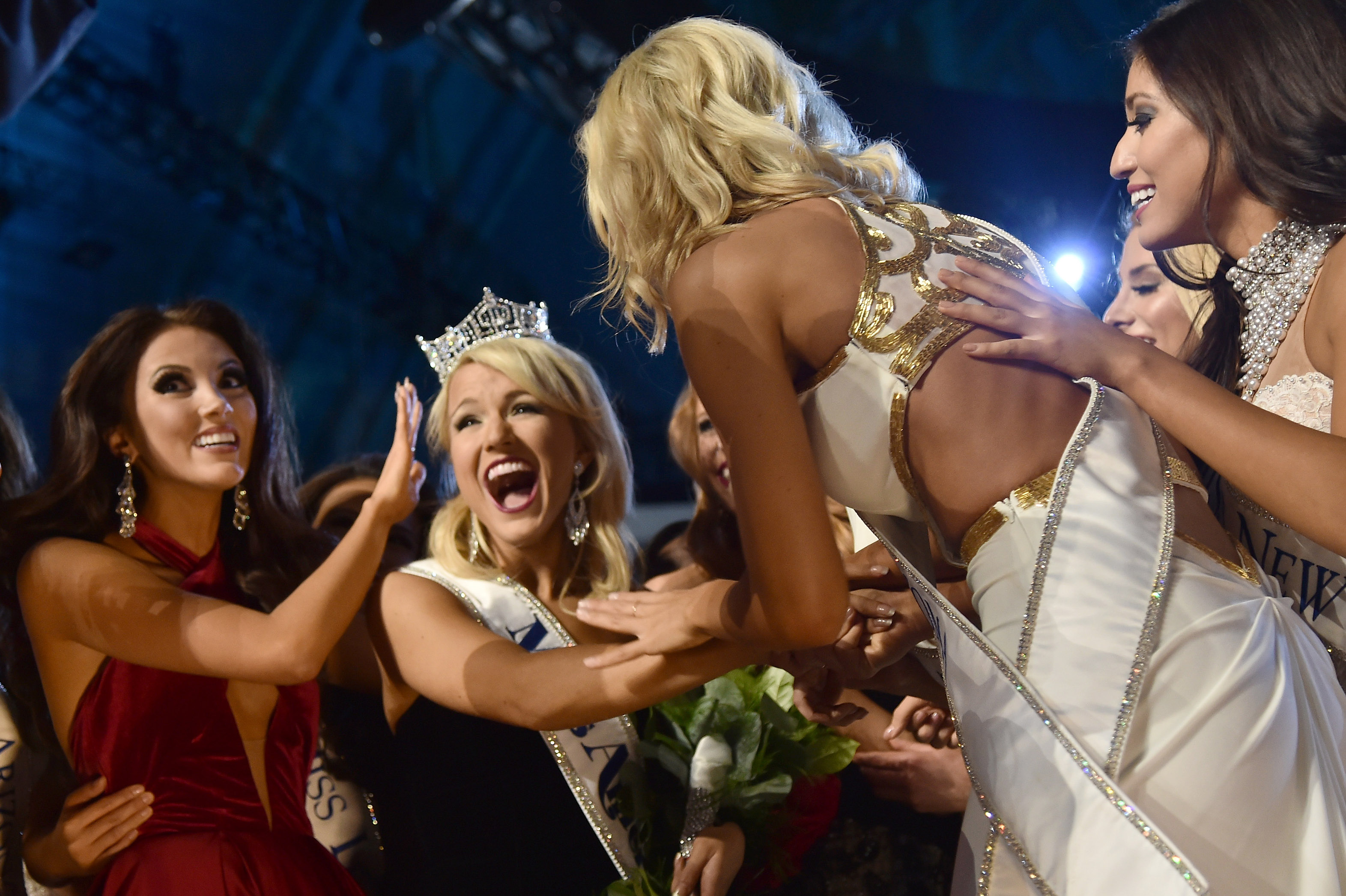 During the question-and-answer portion of the competition, Shields was asked by one of the judges: “Hillary Rodham Clinton, what do you think?”

Shields chuckled and said: “Ha, sorry that’s kinda funny,” before gathering her composure. She had 20 seconds to answer the question.

“If you’re trying to be the leader of the free world, everything you say and do matters. All of your actions are held to a higher standard. Unfortunately the media loves to sensationalize everything and it’s hard to tell what is truth and what is truly scandal. I think going back to what my previous contestants said, both of these contestants… candidates have done a good job of competing, but they need to watch what they’re doing.”

I'm Savvy Shields and I am now #MissAmerica! pic.twitter.com/ZPRkmjMWKR

I can't believe preliminary competition for Miss America is over! I have had the absolute time of my life over the past 2 weeks. I got to walk on the most iconic stage in the world, but I also get to walk away with so many new great friends that I know I'll have for life. I'm so grateful for this experience and I can't wait to see who Miss America 2017 will be! #theresheis #MissAmerica

Erin O’Flaherty, representing Missouri, made history this year by competing as the first openly gay contestant.

She chose to speak on the issue of suicides among LGBT youth, but stressed in her interviews that her sexuality is not her defining characteristic.

“I think other people tend to focus on it, but it is one small part of who I am and the work that I do. It is just as important for people to realize I am not one dimensional,” she told the New York Times, prior to the competition.

Ruining pageants since about ten minutes ago. #MissAmerica

During the swimsuit competition, Shields, who would later take home the crown, strutted on the stage in heels and a black bikini. At that moment, the camera panned to Mark Cuban, one of the judges, who was licking his lip. This led to one of the creepier memes of the night.

Cuban responded to the jests tweeting, “It’s a lot harder than it looks,” about his judging duties.

4. Why is there a swimsuit competition?

This is the question that always seems to pop up during the pageant. What’s the point of the swimsuit competition? How is this relevant to an organization that bills itself as “the largest provider of scholarship assistance to young women”? Others defend it as being a part of tradition and an opportunity to show confidence and fitness.

Miss Teen USA stopped the swimsuit portion of the competition this year. Miss America will keep it in play for the foreseeable future.

“I don’t think Miss America will ever do away with the swimsuit competition,” Sam Haskell, executive chairman of Miss America told ET earlier this summer. “It’s something that we love to show — how physically fit our contestants are. It’s part of the tradition of the organization.”

If fitness is so important, one tweeter asked: “Couldn’t they do an American Ninja Warrior course instead?”

In the meantime, viewers couldn’t help but point out that contestants had 20 seconds to answer questions about sexism, US immigration and the presidential elections, but more than double the amount of time to strut in bikini and heels.

Remember that you will always be judged, regardless of what you do or say. But also remember to never dull your shine in fear of that judgement. Nothing is scarier than an empowered woman who isn't afraid of an opinion that differs from her own. Shine bright beautiful humans and just do you (you'll feel like a magical pegacorn floating away on a cloud of cotton candy) ❤🦄 #eveningwear #missamerica

Arianna Quan, who was representing Michigan, did not qualify for the top 15.

Even before the Miss America pageant, her crowning as Miss Michigan displeased some Internet commenters in the US and China, with some saying she was not pretty enough to represent the Chinese diaspora.

“All this negativity came out, especially about my appearance and how I’m apparently unfit to represent the Chinese population because I’m ‘ugly,'”she told People Magazine.

Quan clapped back at the trolls writing on Instagram: “Remember to never dull your shine in fear of that judgment. Nothing is scarier than an empowered woman who isn’t afraid of an opinion that differs from her own.”

Quan, a transportation design student, wore pants during the evening wear competition as a symbol of her role as a woman in the automotive industry.