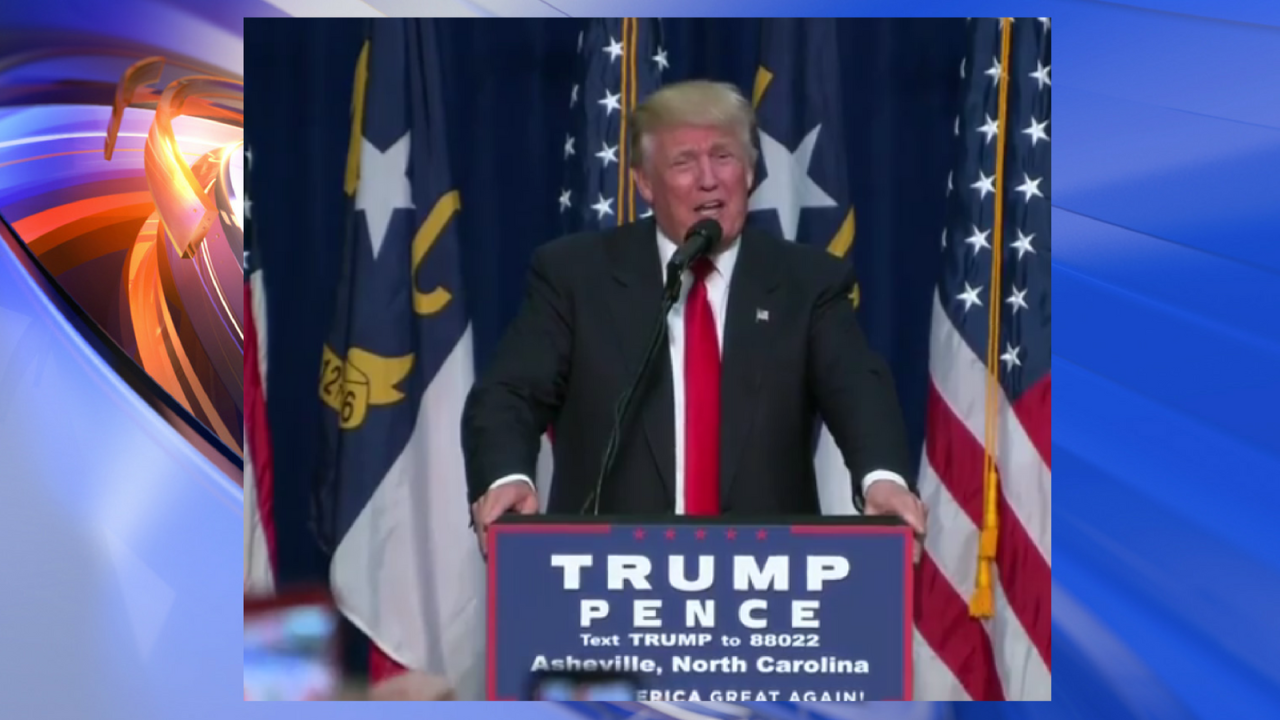 A man attending Donald Trump’s rally here on Monday grabbed a protester by the neck and appeared to hit him in the face.

The man accosted a group of eight protesters who began shouting in the middle of Trump’s rally and exchanged words with one man before grabbing him by the neck while brandishing his closed fist. The Trump supporter then swung at the protester, but it’s unclear if the protester dodged the punch.

Police officers, who were stationed throughout the arena of Trump’s rally, were not involved in the incident and the unidentified Trump supporter remained at the rally and was not arrested. The Asheville Police Department did not immediately respond to CNN’s request for comment.

The incident on Monday came as Trump lambasted Hillary Clinton for calling half of his supporters a “basket of deplorables,” accusing her of running a “hate-filled” campaign.

And moments earlier, Trump had brought a group of supporters on stage, proclaiming them hard-working Americans, not “deplorables.”

Clinton has said she regretted saying the word “half,” but said she will continue to call out the “bigotry” in the Trump campaign.

The man who attacked the protester also tried to grab a female protester who was also being escorted out of the building.

And when a woman in a hijab tried to sit down as the group of protesters were ejected, the man shouted, “Get out!” and motioned for her to leave.

After the supporters were ejected, the Trump supporter extended his arms, raising his clenched fists like a victorious boxer.

The incidents occurred as a Trump campaign staffer arrived by the group of protesters to escort them out of the rally. The staffer did not ask the supporter to leave the rally.

The altercation is not the first incident of violence at a Trump rally.

A Trump supporter in Fayetteville, North Carolina, was charged with assault in March after he punched a protester as he was being escorted from the venue by police. Trump later suggested he might pay for the man’s legal bills.

And last fall, a Black Lives Matter protester was tackled, punched and kicked by a Trump supporter at a rally in Birmingham, Alabama. Trump later said that man maybe “should have been roughed up.”

Trump has also been accused of stoking violence at his rallies, telling supporters during a February rally that he’d “like to punch him (a protester) in the face.”

“In the old days,” Trump added then, protesters would be “carried out on a stretcher.”

But Trump has sought to mollify the tone of his campaign, saying at more recent rallies that his supporters should be non-violent toward protesters.

As he slammed Clinton for saying that half of his supporters are “racist, sexist, homophobic, xenophobic, Islamophobic,” Trump argued that every American deserves “leadership that honors you, cherishes you and totally defends you.”

“Every American is entitled to be treated with dignity and respect in our country,” he said.