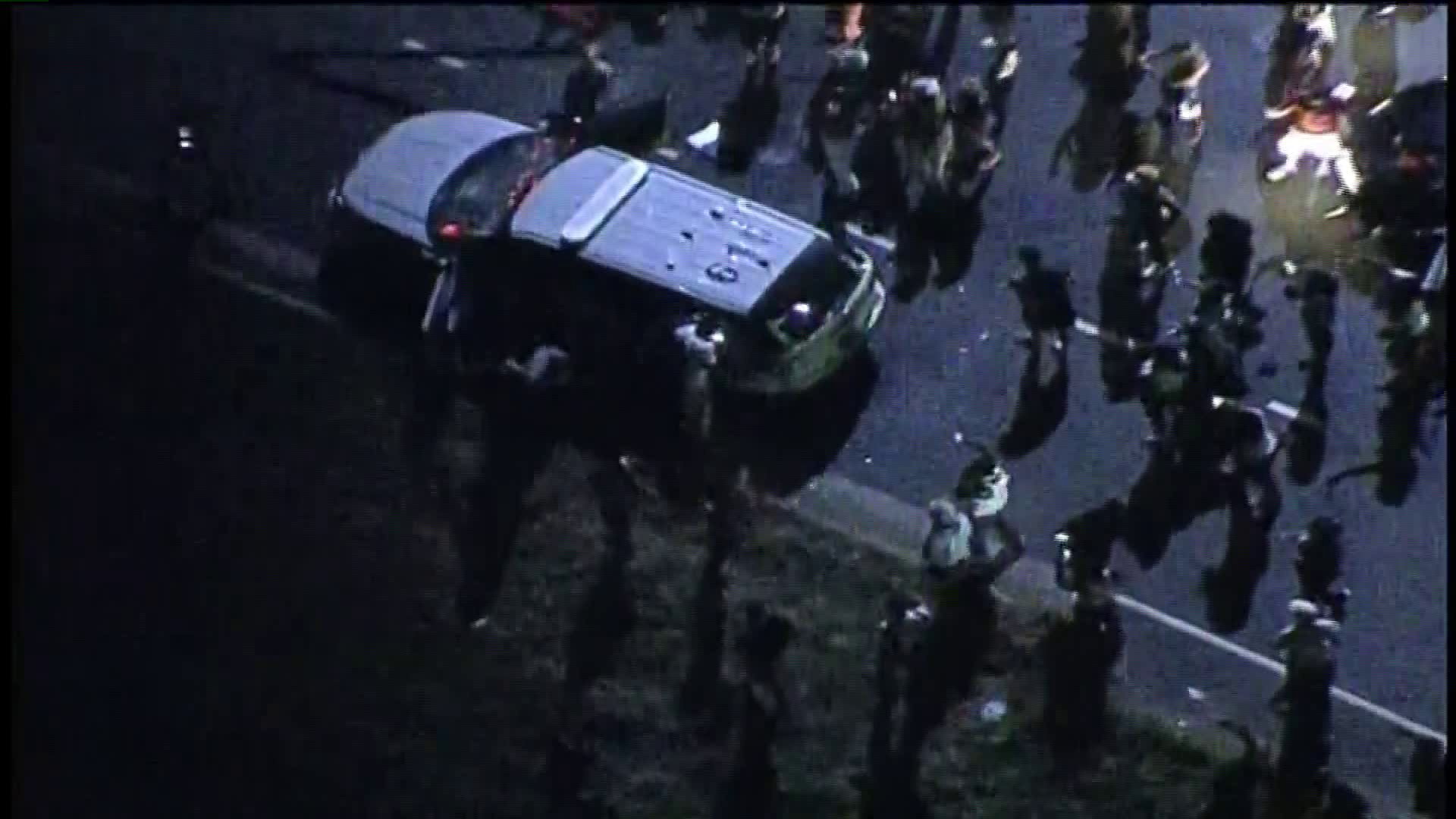 CHARLOTTE, N.C. – Violent protests erupted overnight in Charlotte, North Carolina, after a police officer fatally shot one man while serving a warrant for a different person at an apartment complex.

Police say the man they shot had a gun; his family members say he was carrying a book.

The Charlotte case is the latest shooting involving an officer, and racial tensions are high nationwide following a spate of others. Last week’s fatal shooting of Terence Crutcher, an unarmed black man in Tulsa, Oklahoma, sparked protests after video of the killing appeared Monday. Protesters have been demanding justice and an end to police brutality for months.

In Charlotte, police went to serve a warrant Tuesday and shot and killed a man in the parking lot of The Village at College Downs apartment complex in the University City neighborhood.

Scott was not the person authorities were looking for, the Charlotte-Mecklenburg Police Department said.

Scott died at Carolinas Medical Center. A gun he was holding was found at the scene, police said.

Family told CNN that Scott was a father of seven and was sitting in the car reading a book when officers arrived on the scene.

The Tuesday afternoon shooting set off an angry crowd, which grew as the hours passed.

Some threw bottles and rocks at officers working to control the protesters, but others implored them to stop.

“That’s when things really started to pick up. I would say not long before 11 p.m., police deployed tear gas … as they tried to clear the streets,” said Adam Rhew, associate editor for Charlotte magazine.

After a brief lull, a crowd regrouped early Wednesday and blocked Interstate 85, one of two major expressways running through Charlotte. Some started a fire at the center of the highway, forcing vehicles and tractor-trailers to stall as far as the eye could see.

Other protesters removed boxes from the back of semitrailers and set the items on fire. Police in riot gear formed a line and forced crowds away from the highway.

Shortly after, the highway partially opened, but some protesters remained and continued chanting. Others jumped on top of a police van and stomped on it, breaking the windshield and other windows.

At least 12 officers were injured, the police department tweeted. It did not provide details on the nature and severity of the injuries but said one officer was hit in the face with a rock.

At least seven people were transported to the hospital with minor injuries, CNN affiliate WSOC-TV reported. Five others were arrested, according to the station.

It’s unclear why authorities were serving the warrant. While they were looking for the individual to serve, officers saw a man get out of a car with a gun, then get back into the vehicle, the police statement said.

“The subject got back out of the vehicle armed with a firearm and posed an imminent deadly threat to the officers who subsequently fired their weapon striking the subject,” police said.

Police Chief Kerr Putney said at least one officer shot the man. Two investigative branches of the department are looking into the shooting, he said.

Brentley Vinson, the Charlotte police officer who fatally shot black man Keith Lamont Scott on Tuesday, is also black, the mayor’s office said. He has worked for the department for two years and has been placed on paid administrative leave.

Many of the protesters pointed to the case of Ahmad Rahami, the suspect in the New York and New Jersey explosions who was arrested alive Monday after a shootout.

“Something has to be done. … (T)here was a terrorist in New Jersey, New York. He was taken alive,” protester Nichelle Dunlap told CNN affiliate WCCB-TV in Charlotte.

“They said they want to question him. So because you wanted to question him, does his life mean more than our black men across the nation? It doesn’t make any sense.”

“When will our lives truly matter? A black father is dead. There are children tonight who will never see their father again,” said Mack, who is president of the Charlotte chapter of the NAACP.

The mayor called for a full investigation into the shooting, saying she’ll work with authorities on the case.

“The community deserves answers and full investigation will ensue. Will be reaching out to community leaders to work together,” the mayor tweeted.