VIRGINIA BEACH. Va. -Over the weekend, a hungry 8-year-old boxer named Roxie got into the trash and ate seven corn cobb halves. She threw up six of the cobbs, but one remained lodged in her small intestine. Dakota Hudson, Roxie's owner rushed her to BluePear emergency pet hospital Tuesday because Roxie refused to eat and was sluggish.

After an x-ray, doctors said surgery was Roxie's only option to survive. Unfortunately, the $5,000 price tag, was not something Hudson could afford.

"I never thought in a million years, I'd have to sign paperwork for my dog euthanized. So signing that paperwork was probably the hardest thing I had to do in my entire life," said Hudson. 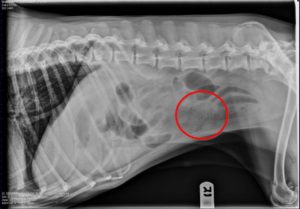 Fortunately for Roxie and Hudson, Frankie's Friends a national pet charity, swooped in to help pay for the surgery. The non-profit organization is known for providing financial assistance to families with pets needing lifesaving care.

“We just fell in love with Roxie’s sweet face the moment we saw her,” said Danielle Martin, Executive Director of Frankie’s Friends. “Cases such as these are the reason our group exists.  We’re so happy we’re able to help Roxie and ensure she has many more years with her loving family.”

A veterinarian at Blue Pearl told News 3, it was incredible Roxie was able to get the first six cobbs out. The surgery took place Wednesday. Dr. Anemome Andronescu was able to take out the seventh cobb. The surgery was a success and after Roxie recovered from anesthesia, she started to eat well, which doctors say is a good sign.

Roxie is back home with Hudson and doing much better. Frankie's Friends is continuing to ask for help to raise money for Roxie's follow-up care and to help other pets in Virginia Beach.