Around 1:50 a.m. several people were spotted on surveillance video checking for unlocked car doors in the 2200 block of Spring Run Court.

A vehicle was seen pulling into the court, five people got out, and they broke off toward the parked vehicles. The vehicle they arrived in is a light blue Ford Edge believed to be stolen from the 1200 block of Warner Hall Drive.

Police say on Friday that all stolen vehicles have been recovered except for a 2007 Silver Lincoln MKX, NC EDT6841.

The stolen vehicles recovered were:

"You just feel like you have to watch your back at all times," said one of the victim, who didn't want to be identified.

If you have seen any of the stolen vehicles or you have any information on the suspects, you're asked to call the Virginia Beach Crime Line at 1-888-LOCK-U-UP. 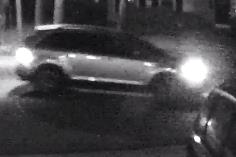 Authorities say the men also used a credit card stolen from one of the vehicles at the 7-Eleven at 1205 Oceana Blvd.

One suspect's face has been blurred because police believe him to be a juvenile.