Hope, Courage and Unity: The story behind the young cancer patients who painted space suits 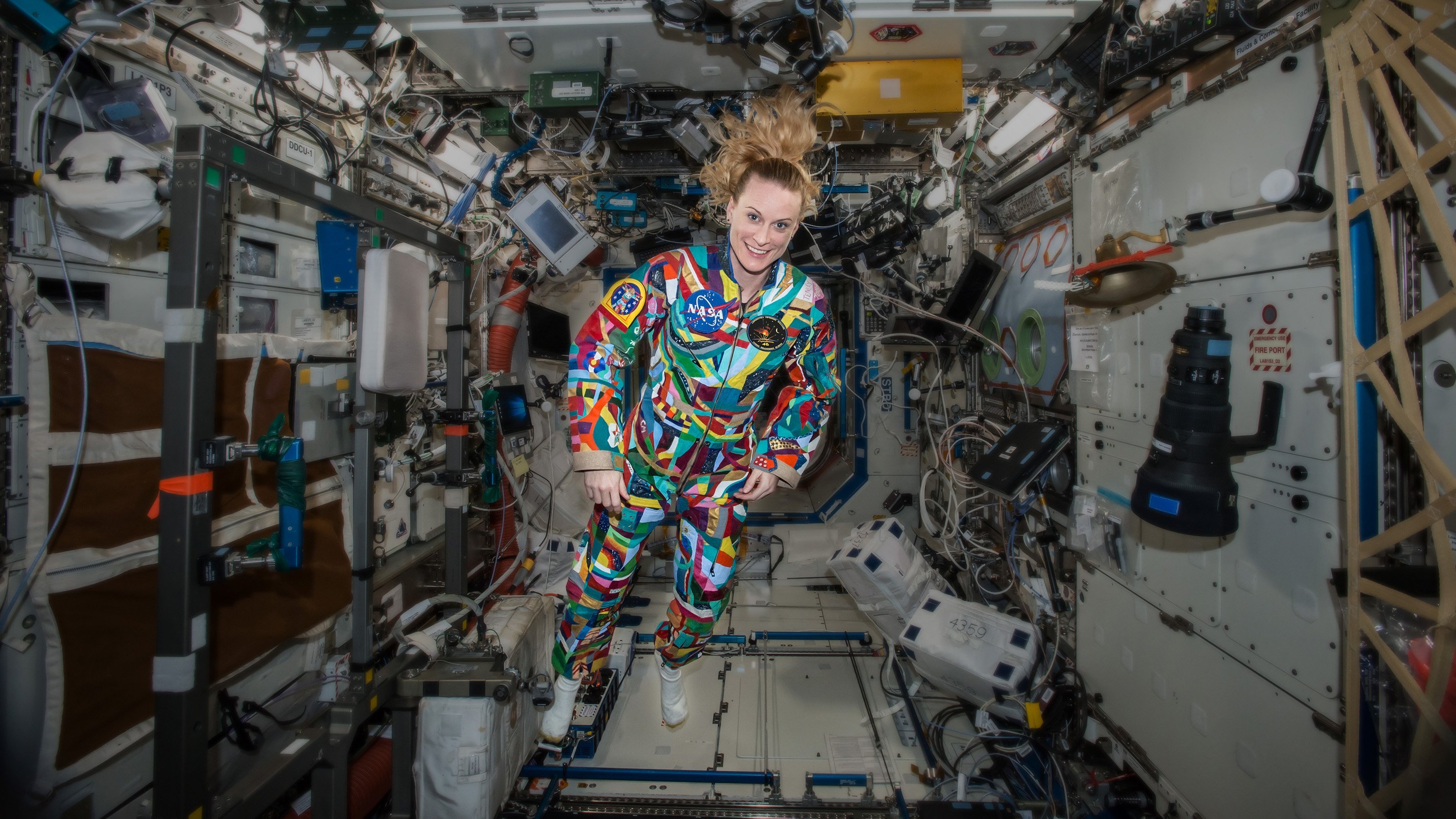 Each piece of a bright patchwork space suit named Courage tells a story. Most of the triangles were painted by childhood cancer patients from MD Anderson hospitals, some impossibly young, some on the edge of 17, some in isolated treatment, some in recovery.

The brilliant swirls of color and creativity represented how some celebrated defeating cancer. For others, touching a brush to fabric was one of their last acts at the end of a short life.

Courage is a fitting name for the suit; it’s one of three created by young cancer patients as part of the Space Suit Project.

On September 16, the stark whiteness of the International Space Station became an art gallery when astronaut and cancer researcher Kate Rubins donned the Courage suit and called down to Earth to speak with some of the patients. She had visited with some before departing for the station on July 6, and even picked up a paint brush to contribute her own splash of color.

“Thank you to every single kid who painted on this suit,” she told them. “You guys are artists, you’re awesome and you’re inspiring to me.”

As Rubins spoke, patients could see the suit’s many colors and details, including a painting of little white elephants marching down her right arm.

To those who knew about the elephants, it’s a wonder that they even exist — and a comfort that they made it among the stars.

Putting this artwork into orbit around the Earth wouldn’t have been possible without Ian Cion and his belief in the power of art and medicine, united.

Cion has been running the Arts in Medicine program at MD Anderson for six years, creating large-scale projects with patients to connect communities and patients out of their rooms. Building space suits out of artwork created by childhood cancer patients seemed like a natural fit.

“For me there’s always been this other layer to what art can do,” Cion said. “The primary goal was to get our patients motivated and excited to do something unusual and profound. And for the second goal, I hoped we could generate enthusiasm and it could translate into building awareness for childhood cancer.”

Cion worked with Gordon Andrews in the Strategic Communications Group at Johnson Space Center, as well as retired astronaut Nicole Stott, the first astronaut to paint in space, and who now pursues her passion as an artist. Stott brought on Rubins. ILC Dover, which has been making NASA’s space suits for years, helped construct the suits.

Stott, who flew multiple missions to the space station that included a spacewalk, calls the Space Suit Project the most meaningful thing she’s ever supported.

“I think at the core of it is inspiration and hope for the future and that’s what every single one of these kids needs,” she said. “If something like making space suits out of their artwork can encourage them to think beyond what they’re experiencing right now, then it’s so wonderful.”

The Space Suit Project has completed two suits and is working on a third. The first one, Hope, has been worn at different art events at the hospitals and has been displayed as art. The second, Courage, used a pattern and paints approved by NASA and ILC Dover.

The third, Unity, will combine artwork collected by Cion and Stott during their tour of hospitals in the capital cities of the partner space agencies that helped build the space station: Cologne, Moscow, Tokyo, and soon, Montreal. It represents the way the space station has brought people and countries together in the name of research and exploration, Stott said.

The Space Suit Project continues the quest for awareness around childhood cancer. NASA is currently participating in cancer research. The cancer center at MD Anderson has a Moon Shots program to tackle the disease with a new plan targeting research around early detection, prevention and treatment.

Cion has witnessed the emotional toll of cancer treatment. It’s why he started setting up art studios in the hospital.

“I’ve walked into rooms where people were crying and in pain and suffering,” Cion said. “I’ve been able to see moments when you watch as they transform before your eyes. A person’s focus is a really powerful ally for healing.”

An elephant pointing toward the sky

Jacob Ballard, now 17, discovered the Arts in Medicine Program while in treatment at MD Anderson. He was diagnosed with Ewing’s sarcoma, a cancer that affects the bones, in November 2014. Over the course of 120 days spent in the hospital, Jacob received 160 doses of aggressive chemotherapy.

There was a tumor in his pelvis, a challenging area. Surgeons had to remove the entire left side of his pelvis. Doctors couldn’t reconstruct it, his mother, Letha Ballard, said, but they crafted a joint out of scar tissue. Through rehab, Jacob is able to walk again.

He will still have to go in for check-ups and scans, but Jacob is doing well. His mother calls him “a walking miracle,” who maintained a good attitude through treatment, but he was closed off to others. Then, Cion came along.

Jacob and Cion bonded over “Avatar” and their camaraderie was instant. Soon, he started participating in the art projects.

“Working in a group brought him out of his shell,” Letha said. “He opened up and started making friends.”

It’s how he met Katarina Stoffa, also 17. Although Jacob was shy, he would talk to Kat for hours.

They would talk about “real stuff,” he told his mom. She tries to understand me, and she’s so smart and interesting, he told her.

She too had battled Ewing’s sarcoma in her right shoulder starting in January 2013. She received treatment for 10 months and had her scapula removed, then had a recurrence. After more chemo, she was clear for nine months when another battle began — acute myeloid leukemia, caused by the chemo that had treated her Ewing’s sarcoma.

She received a stem cell transplant, hoping to get through the 100-day window that would signal she was in the clear.

On day 95, the leukemia was found again.

” ‘I’m not going to go on, mom, if this comes back,’ ” Kat’s mother, Eileen, remembers her daughter saying when she was 15. Now, her words were coming true.

She created a bucket list, and for two months, the family did whatever Kat wanted to do. Cion arranged for her to visit her favorite animal: elephants. The family got matching elephant tattoos designed by Kat.

When Kat entered hospice care at home, Jacob and his mother came to visit many times, Eileen said.

Cion kept asking if Kat wanted to work on art for the space suit, but she hadn’t been well enough to participate. Eventually, he came to their apartment with art supplies.

The four elephants march in a row down the right arm of the space suit, one behind the other. They are linked trunk to tail, except for the last elephant. It is a baby elephant, and it sits alone, with its trunk pointing towards the sky. Stars and planets surround them. It matches the tattoos Kat and her family received.

Jacob’s favorite color is green. He painted bold stripes on the right arm of the space suit.

‘Space is where I’m going to end up’

In the early morning hours of July 18, a SpaceX Falcon 9 rocket launched from Cape Canaveral to the International Space Station carrying the space suit Courage. Cion, Jacob and his mother were there. They watched the brilliant flash of light as the rocket ascended the stars in the night sky. It was an emotional moment that none will forget.

Jacob wants to work on rovers and robotics for NASA. It combines his love of science, engineering, art and working with a community.

“Ian started it and the NASA connection lit a fire for Jacob,” Letha said. “He told me, ‘This is what I want to do.’ ”

His friend Kat didn’t live to see the launch. She passed away on June 4.

“I think space is where I’m going to end up,” Kat told her mom when asked about the planets and stars surrounding her elephants.

“This space suit has a lasting effect on the world,” her mother said. “It’s priceless.”

Even though the leukemia was caused by Kat’s treatment for cancer, Eileen has no regrets; they tried everything they could to help her. Kat and Jacob’s mothers both hope that the suits, and the Moon Shots program, can lead to awareness and research for better, safer treatments. As parents of children with cancer, they have had to make gut-wrenching decisions.

But they also credit Cion and his Arts in Medicine program with helping to create some of the positive memories they have, and what they hope other childhood cancer patients and their families can have.

“When you’re a child with cancer, a lot of doors are being shut for you,” Letha said. “You’re told, ‘You will never do this or that again.’ But look at this suit. It went to space. It’s symbolic of their friendship, and a permanent beautiful reminder of Kat. And it was great to see what these children can do.”