VIRGINIA BEACH, Va. - It's wet, it’s loud and it’s a tough job, but without storm drain crews, Virginia Beach residents would be less than prepared for this weekend’s stormy weather.

“It is a 52 week-a-year program,” said the City’s Public Works spokesman, Drew Lankford. “We have got a large city that is spread out. It is coastal, a lot of rivers and inlets and creeks, so storm water is more of an important issue with us than it is with a lot of other cities.”

Even wonder what a storm drain looks like on the inside? Storm drain crews say this one was in relatively good shape when they went to clean it.

Storm crews are already working overtime in anticipation of this weekend storm, cleaning some of the thousands of storm drains in Virginia Beach’s most low-lying areas.

“We’re in good shape even without the hurricane coming along,” Lankford told News 3 Friday afternoon. “But we have all learned [hurricanes] are pretty unpredictable. I’m still not placing any bets that the hurricane is going to come close to us, but we’re ready if it does.”

Storm drain crews tell News 3 pinecones and pine needles are public enemy number one and number two when it comes to storm drains. They encourage neighbors to pitch in and sweep up the yard debris in anticipation of the storm.

“We encourage people, when they are putting their garbage cans or bags of debris, do not put it up against the curb, because that blocks the drainage,” Lankford said.

Storm drain crews in Virginia Beach told News 3’s Merris Badcock the most alarming thing they ever found in a storm drain was a baby stroller.

Public works’ crews in Virginia Beach have also spent most of the week sandbagging some areas, cleaning ditches and checking pumps at all of their lakes.

Storm drain crews in Virginia Beach clear out drains in anticipation of the weekend storm.

“Because of all the rain we had this last month, we’re even pumping water out of some lakes, in anticipation of this weekend’s weather,” said Lankford.

Virginia Beach isn’t the only one preparing. In Norfolk, crews have also been clearing storm drains, and city officials opened the York Street garage on Friday to give residents a free place to park if they need to move their vehicles to higher ground.

No matter how much preparation city officials do, residents should be prepared for flooding.

“This [hurricane] has been going back and forth, so we do not really know how much water we are going to get this weekend,” said Lankford. “But if you start coming in there with streets that are flooded, do not think you have superpowers. If it tells you high water, believe it.” 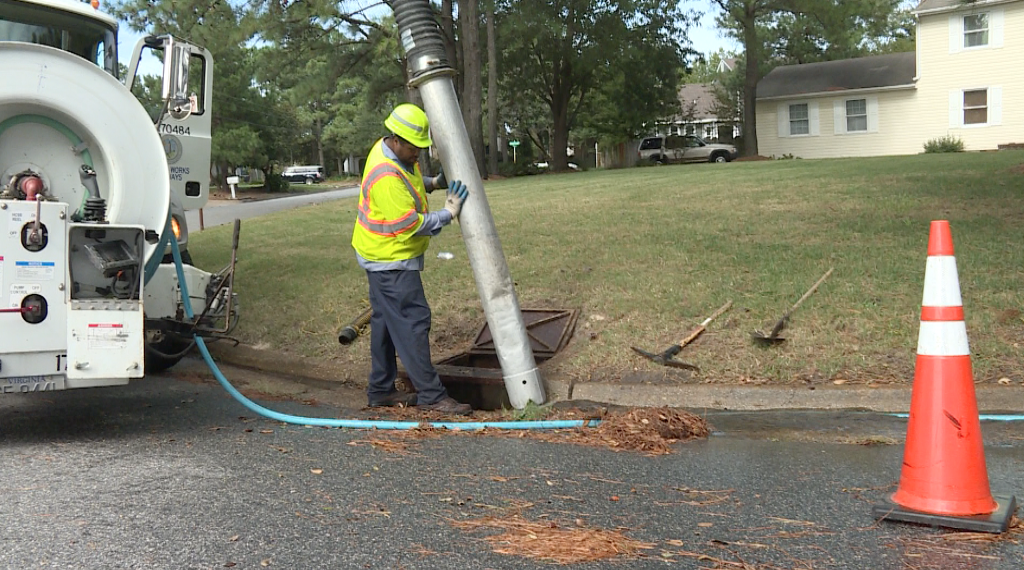