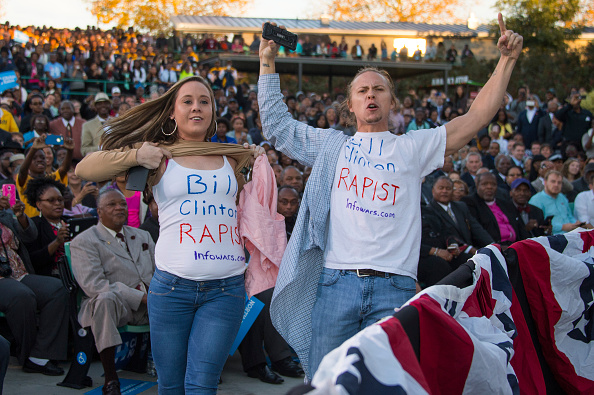 GREENSBORO, .N.C. – President Obama spoke on the campaign trail for Hillary Clinton in Greensboro on Tuesday.

Obama touched on Donald Trump’s recent comments in a video that was leaked from 2005.

He said the comments were unacceptable and that he doesn’t believe the majority of Republicans think like Trump.

Obama also condemned Republican leaders who have come out saying Trump’s conversation was despicable but have not yet un-endorsed the Republican nominee.

As Obama was speaking two protesters could be seen at the front of the stage with their hands in the air and shirts on that said ‘Bill Clinton rapist.’

Another protester was seen at the front of the crowd again a little later in the President’s speech yelling inaudible chants.

Obama candidly laughed off the protesters and said “This is our democracy at work, this is great.”

He then went on get the crowd involved saying not to boo protesters but to vote saying, “Don’t boo, vote!”

Click here for full coverage of the 2016 Presidential Election