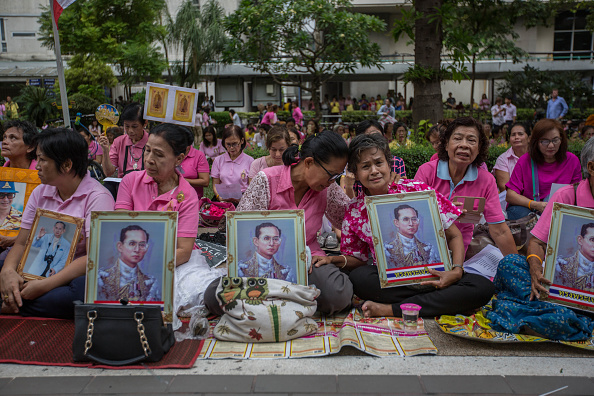 Thailand has heightened security amid funeral preparations for King Bhumibol Adulyadej, a revered figure who helped unify the nation in his 70-year reign. He was 88.

• Thousands gathered at the hospital, shouting “Long live the king!”

The announcement came in a statement from the Royal Palace read on state TV Thursday and followed a dayslong outpouring of support since the king was hospitalized October 3. He underwent medical procedures over the weekend.

The king died at 3:52 p.m. in a “peaceful manner,” the Royal Palace said, as thousands waited outside Siriraj Hospital in nervous anticipation of the news.

Bhumibol ascended to the throne 70 years ago, making him the world’s longest-reigning monarch before his death.

Exactly when Crown Prince Maha Vajiralongkorn will ascend to the throne is unknown.

The prime minister urged people to be vigilant about national security.

“Everyone will need to be alert in every region and throughout the country to ensure safety,” he said.

Hundreds of people had for days gathered at Bangkok’s Siriraj Hospital where the king was being treated, and as the sun began to set, the crowd swelled into the thousands.

They were dressed predominantly in pink — an auspicious color believed to restore health — and yellow, which is the color of the king, based on the fact he was born on a Monday.

Some outside the hospital said they didn’t know where else to go for comfort, and many said they had hoped he would live to 120.

Many in the crowd prayed, sang the royal anthem and repeatedly shouted, “Long live the king.”

The announcement, around 7 p.m., cut through the crowd and gave way to devastated wailing and long embraces. Others stared at their phones, sharing messages from friends and family on social media.

Ovartvoraporn Bhakchuda, a Thai woman outside the hospital, was unable to hold back tears, saying she hoped the news was not true.

“We lost our father today,” she said. “He is a father … that wanted to do everything, the best thing, for his kids.”

“With all my heart I hope that miracle will happen. I want to believe in miracles … I still believe up until now that this is a lie.”

According to the palace statement, all government buildings will fly the Thai flag at half-staff for 30 days starting October 14, and all civil servants have been ordered to wear black clothing for a year as a sign of mourning, the palace said.

“I would like to ask all Thais to listen to the credible source of news and invite all Thais to dress in a way to mourn his passing for one year to offer our condolences,” the prime minister said in a television address.

He further urged citizens to remain calm, for the sake of the country’s stability, and said soldiers would be stationed in “every area throughout the kingdom” to boost security.

“Do not let anyone seek an advantage during this time of crisis,” Prayut said.

Even on Bangkok’s famous Khao San Road — known for its bright lights, nightclubs and swarms of backpackers — the mood was somber. Restaurants and food vendors remained open, but had been told by police to close by midnight. The usual loud dance music was absent as nightclubs closed for the night.

Tributes from around the world

Condolences began pouring in from world leaders. Obama said the king was a man of “grace and warmth,” and recalled his “deep affection and compassion for the Thai people,” when he visited the monarch in 2012.

“As the revered leader and only monarch that most Thais have ever known, His Majesty was a tireless champion of his country’s development and demonstrated unflagging devotion to improving the standard of living of the Thai people,” Obama said.

British Prime Minister Theresa May said: “His Majesty guided the kingdom of Thailand with dignity, dedication and vision throughout his life. He will be greatly missed.”

Indian Prime Minister Narendra Modi described the king as “one of the tallest leaders of our times.”

Russian President Vladimir Putin said the king had “won the sincere love of his people and high authority abroad for the decades of his reign,” Russia’s state-run news agency TASS reported.

Singaporean Deputy Prime Minister Teo Chee Hean, in a Facebook post, described the king as a “wise and much-loved monarch who did much for the people of Thailand.”

UN Secretary-General Ban Ki-moon, in a statement released by a spokesman, praised the king’s “long dedication to his country and his legacy as a unifying national leader.”

The government of Indonesia called the king’s death “a great loss” to the Association of Southeast Asian Nations — a 10-member bloc dedicated to economic, political and security cooperation — as well as the world.

The Philippines said the king was “a Father of the Nation, whom the Thai people revered and loved dearly. He will surely be missed. We are one with the royal family, the Thai government, and the Thai nation during this period of deep mourning.

The king appealed to the rich urban elite as well as to the poor agricultural workers. During his reign, he skillfully charted a course that put the monarchy at the center of Thai society, acting as a force for community and tradition even as the country lurched between political crises and more than a dozen military coups, both attempted and successful.

He acceded to the throne in 1946 in the aftermath of Thailand’s occupation by Japan during World War II. Until his death, he reigned over more than 20 prime ministers and many constitutional changes. He also helped the country navigate the disruptive effects of the Vietnam War during the 1960s and ’70s.

For most Thais, he is the only monarch they have ever known, and before his death, analysts expressed concern that his passing will remove a vital point of unity in an increasingly divided country.

Also known as Rama IX — a reference to his lineage stretching from Rama I, the founder of the Chakri dynasty — Bhumibol commanded great love and respect within Thailand. An energetic public relations machine promoted his popularity, which led to his portrait being adorned with marigolds from Bangkok office lobbies to the poorest of rural homes.

The king’s health had been in slow decline for some time. The palace said a team of royal physicians had tried its best and provided the closest care.

Toward the end of his reign, his presence in public life waned. Doctors at the Siriraj Hospital had earlier said he was having problems with his kidneys, blood flow to the left side of his heart and blood pressure.

Last month, he was treated for a severe infection, reduced kidney function and fluid in his lung. He had surgery to remove his gallbladder last year.