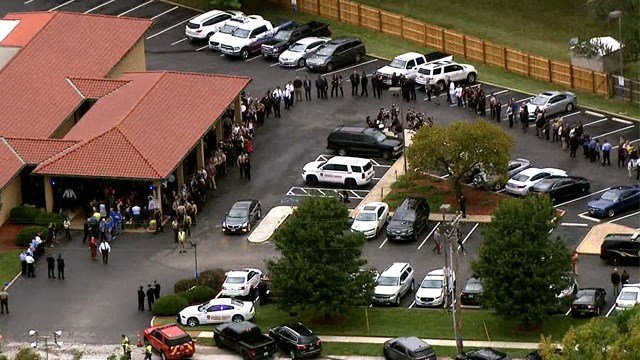 Thousands of people lined the streets and attended a visitation and funeral for fallen St. Louis County Officer Blake Snyder.

“This is unbelievable amount of respect and outpouring from the community,” said County Councilman Mark Harder.

Wednesday night, traffic moved slowly through the area, as cars, many of them police cruisers, parked in any available space outside the Kutis Funeral Home in Affton for Officer Snyder’s visitation.

Police from all over the area and the United States attended the visitation, including Forth Worth, Texas Police Officer Buddy Calzada.

“We don’t even know these guys and yet we love them,” Calzada told News 4.

At 10 a.m. Thursday, a procession from the funeral home to St. Louis Family Church in Chesterfield took place.

During the procession, thousands of people lined the streets. Drivers were seen stopping and getting out of their vehicles as the procession passed to pay their respects. Overpasses were decorated with signs of support and flags decorated the route.

When the procession pulled into the church parking lot, hundreds of officers were there to salute as the casket was taken out of the gold hearse. Officer Snyder’s 2-year-old son could be heard saying “daddy.”

As officials, friends and family members shared their memories of Officer Snyder they remembered him for touching countless lives and his dedication to the community.

“He was truly a man for others, he carved time out of his life as a married father to mentor young people at his church,” Stenger said.

His brother Adam delivered an emotional eulogy where he stated how proud he was of Officer Snyder.

“While we mourn the loss of such a great young man we couldn’t be more proud, proud to have you as a son and a brother,” he said. “Even more proud of the husband and loving father that you have become, but most importantly proud of the way you followed that calling from God in every aspect of life.”

Adam continued by stating he would hold onto the memories the two of them shared.

When his brother-in-law Justin Sparks spoke, he did so as a family member and fellow officer.

“When Blake told me he wanted to become a police man, I told him what my old school cop father told me, ‘You go and do anything else first, you try everything else, especially try being a fireman, and if you find your soul still drawn to the job then you go and you do it and you don’t hold anything back because you know you have found your calling.’ That is what this man did,” he said.

Sparks said when he went to his brother-in-law’s hospital room he had unbelievable pride in him.

Following the funeral, people lined the streets as the funeral procession went from the St. Louis Family Church to Officer Snyder’s hometown of Godfrey, where he will be buried at Valhalla Memorial Park, took place.