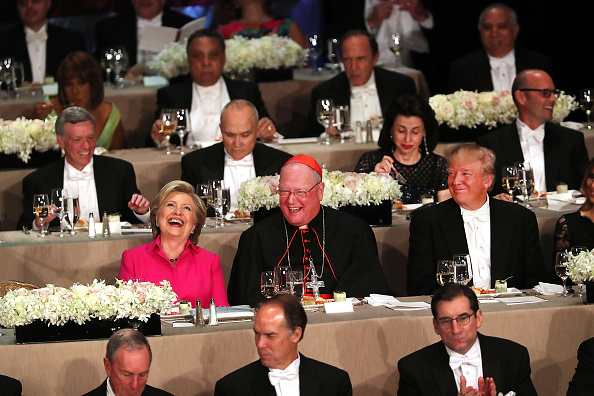 Donald Trump and Hillary Clinton were under the same roof again, less than a day after the heated final presidential debate on Wednesday.

But anyone hoping for cooler heads at the Al Smith charity dinner after an acrimonious debate was likely disappointed, as Trump delivered some cutting lines on Clinton — at times earning boos from the audience.

Here’s a look at the most memorable lines from the dinner:

1. “Some people start out with a self-deprecating joke. Some people think this would be tough for me but the truth is I’m a modest person … Some people tell me modesty is my best quality.”

2. “You know Cardinal Dolan and I have some things in common, such as we both run impressive properties on Fifth Avenue. Of course, his is much more impressive than mine. That’s because I built mine with my own beautifully formed hands.”

3. “It’s great to be here with 1,000 wonderful people. Or, as I call it, a small, intimate dinner with some friends. Or, as Hillary calls it, her largest crowd of the season.”

5. “And even tonight, with all of the heated back and forth between my opponent and me at the debate last night, we have proven that we can actually be civil to each other. In fact, just before taking the dais, Hillary accidentally bumped into me and she very simply said, ‘Pardon me.’ And I very quietly replied, let me talk to you about that after I get into office.”

6. “One of the things I noticed tonight — and I’ve known Hillary a long time — that this is the first time ever, ever, that Hillary is sitting down and speaking to major corporate leaders and not getting paid for it.”

7. “You know, last night, I called Hillary a nasty woman. But this stuff is all relevant after listening to Hillary rattle along and on and on. I don’t think so badly of Rosie O’Donnell anymore. In fact, I’m actually starting to like Rosie a lot.”

8. “You know the President told me to stop whining. But I really have to say the media is even more biased than ever before. You want the proof? Michelle Obama gives a speech. And everyone loves it, it’s fantastic. They think she’s absolutely great. My wife, Melania, gives the exact same speech and people get on her case. And I don’t get it. I don’t know why. And it wasn’t her fault … Oh, I’m in trouble when I go home tonight. She didn’t know about that one.”

9. “I’d like to address an important religious matter — the issue of going to confession. Or as Hillary calls it, the Fourth of July weekend with FBI Director (James) Comey.”

10. “I wasn’t really sure if Hillary was going to be here tonight because, I guess, you didn’t send her invitation by email. Or maybe you did, and she just found out about it through the wonder of WikiLeaks. We’ve learned so much from WikiLeaks. For example, Hillary believes that it is vital to deceive the people by having one public policy and a totally different policy in private.”

When the audience booed at that line, Trump replied, “That’s OK, I don’t know who they’re angry at, Hillary, you or I. For example, here she is tonight, in public, pretending not to hate Catholics.”

1. “This is such a special event that I took a break from my rigorous nap schedule to be here.”

2. “It’s a treat for all of you, too, because I charge a lot for speeches like this.”

3. “I’ve got to say, there are a lot of friendly faces in this room, people I’ve been privileged to know and to work with — I just want to put you all in a basket of adorables.”

4. “And Donald, after listening to your speech, I will also enjoy listening to Mike Pence deny that you ever gave it.”

6. “But I understand that I’m not known for my sense of humor. That’s why it did take a village to write these jokes. People say I’m boring compared to Donald. But I’m not boring at all. In fact, I’m the life of every party I attend — and I’ve been to three.”

7. “Now, you notice there is no teleprompter tonight, which is probably smart because maybe you saw Donald dismantle his prompter the other day. And I get that. They’re hard to keep up with. And I’m sure it’s harder when you’re translating from the original Russian.”

8. “Many people don’t know this, but Rudy (Giuliani) actually got his start as a prosecutor going after wealthy New Yorkers who avoided paying taxes. But as the saying goes, if you can’t beat ’em, go on Fox News and call ’em a genius.”

9. “There is nothing like sharing a stage with Donald Trump. Donald wanted me drug tested before last night’s debate. And look, I am so flattered that Donald thought I used some sort of performance enhancer. Now, actually I did. It’s called preparation.”

10. “And whoever wins this election, the outcome will be historic. We’ll either have the first female president or the first president who started a Twitter war with Cher. And if Donald does win, it’ll be awkward at the annual President’s Day photo when all the former presidents gather at the White House. And not just with Bill. How is Barack going to get past the Muslim ban?”