Bank robbery under investigation in Portsmouth 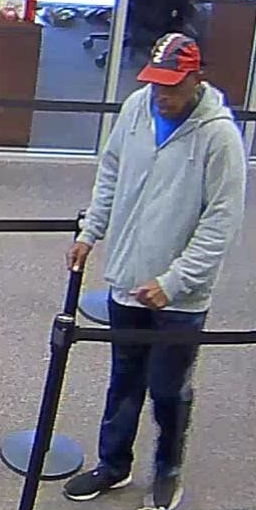 PORTSMOUTH, Va. – Portsmouth Police are investigating a bank robbery that occurred around 9 a.m. at the Wells Fargo branch located at 2400 Airline Boulevard.

Police say a call reporting the robbery came in at 9:06 a.m.

Officers arrived on scene and discovered that a man entered the bank and demanded money from the teller. The teller complied with the demands and the suspect fled from the bank on foot.

No one inside the bank was injured.

The suspect is described as a black male in his late 40s or early 50s, standing approximately 5’8”- 6’ tall, and weighing between 175-200 pounds.  The suspect was last seen wearing a blue t-shirt under a gray hoodie, blue jeans, black sneakers, and a red and navy blue baseball cap.

Detectives are asking anyone who has information about this crime or recognizes the male pictured in the surveillance video photographs, to call the Crime Line at 1-888-LOCK-U-UP.