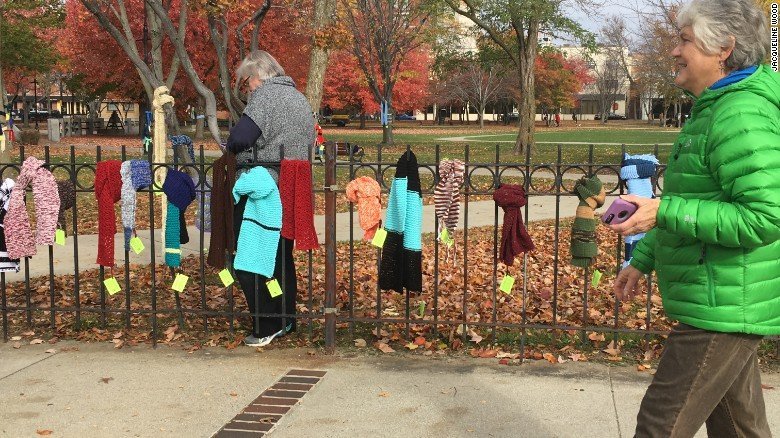 The hundreds of scarves and mittens that adorned a New Hampshire park this week certainly brightened things up. But they were not meant to be decorative.

They were part of Scarves in the Park, a clothing drive by a church Tuesday at Veterans Memorial Park in Manchester. For a second year, Longmeadow Congregational Church, United Church of Christ, in nearby Auburn held the event to help those in need stay warm as temperatures begin to fall.

“Our church is always looking out for some way of reaching out that engages people, that has people doing more than just writing a check,” the Rev. Ruth Gallot told CNN affiliate WMUR-TV in Manchester.

Last year, the church had gathered 75 scarves to give away. This year, the number passed 400, thanks to a yearlong effort of knitting and crocheting by volunteers.

“We told people to use whatever yarn you have,” Gallot told the TV station. “If you have yarn you want to get rid of, you’ve got it stocked in your house and are spring cleaning, give it to us, and we have knitters and crocheters who contact us, and we give them the yarn.”

Gallot told the station that the church chose to distribute the items, attached with notes of kind words, at the park rather than donating them to a thrift shop to reach as many of those in need as possible.

“We also know that some people won’t necessarily go in those places, and we just feel it’s important for us not to vet everybody to see if they are worthy of our help,” she told WMUR. “We’re doing it to help.”

Licrese Kanyegere, a native of the Republic of Congo, attended the event to pick out items for her seven children, according to the station. “This means a lot, because it keeps us warm, because it’s very, very cold here,” Kanyegere to WMUR.

Gallot declines to take credit for this method of charitable distribution. Rather, a similar event held by a United Church of Christ church years earlier inspired her.

“Our hope is that the publicity we have received will inspire other people to do similar things in their areas,” she said in an email.