At Hillary Clinton’s election night party in Manhattan, her supporters grew tense. Before long, they were despondent.

As the returns trickled in on Tuesday, the thousands who were gathered at the Javits Convention Center to celebrate a historic victory started to realize that something was wrong. Virginia was much too close. Clinton was falling behind in Florida. Wisconsin — a state that the Clinton campaign considered to be in the bag — was too close to call.

Well before midnight and still hours before the 2016 presidential race would be called, Clinton supporters began to leave.

Descending the steps down to the ground floor and walking out through the glass doors into the chilly night, some were crying and others were consoling family and friends. Many looked shell-shocked — unable to comprehend that the woman they believed would become the country’s next president was going to be defeated by Donald Trump. 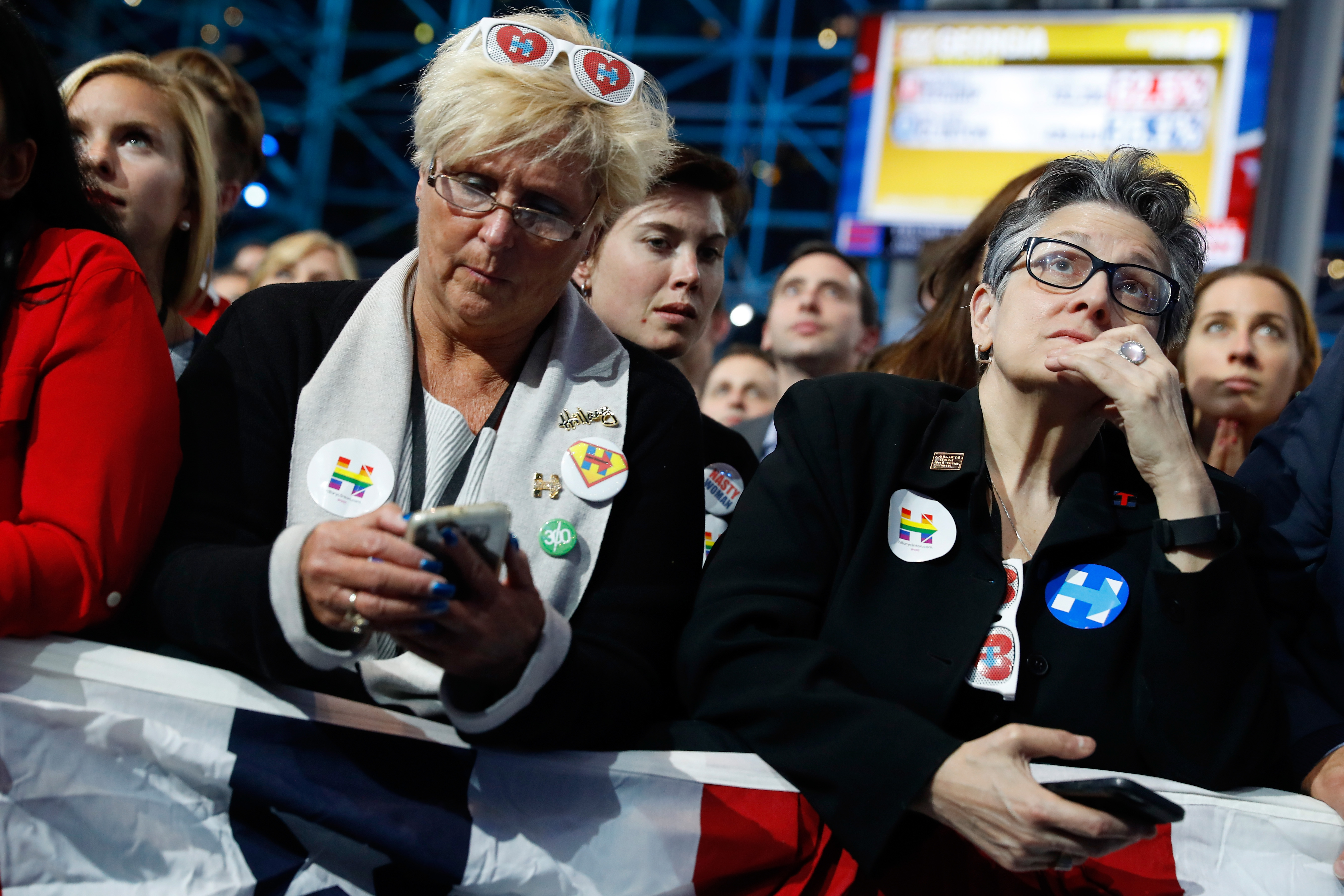 One woman named Kerry wept as she headed toward the exits, saying she had to hurry home to her 16-year-old daughter.

Kerry, who does IT work at a school and lives outside of New York City, said before walking away that she was “horrified” for her daughter.

As she explained that she is half-Latino and half-Asian, Barahona Marana said almost sheepishly: “I’m the margin that was supposed to bring this in.”

Inside the Javits Center, the shock was not only contained to Clinton supporters, staff and volunteers. It also reverberated through the press. Huddled together, journalists, too, expressed disbelief at what increasingly appeared would be a Trump victory.

One reporter said the entire evening felt like an out-of-body experience; another wondered if the night could be a dream.

At 2 a.m., Clinton’s campaign chairman, John Podesta, took the podium, on a stage shaped like the continent of the United States.

Podesta said more votes needed to be counted, and that the conversation should continue the next day.

“Everybody should head home. You should get some sleep,” he said.

For 21-year-old Fermin Villalpando, who lingered after Podesta’s remarks, the possibility of a Trump presidency was both shocking and troubling because of his background. Villalpando’s parents were both born in Mexico.

“My mom and also my dad are very scared,” he said. “It’s going to become probably a little more dangerous just to be of Hispanic heritage.”

Others were still in disbelief.

“Maybe we’ll just wake up tomorrow and they’ll say, ‘Oh, it’s OK. We just found a whole bunch of ballots, she won Florida,'” one woman was overheard saying to her companions.

One man insisted into his cellphone: “Hillary did not concede.”

At the Hilton Hotel some two miles away in Midtown, Trump took the stage to deliver his victory speech.

“I’ve just received a call from Secretary Clinton. She congratulated us,” Trump said. “Hillary has worked very long and very hard over a long period of time, and we owe her a major debt of gratitude for her service to our country.”

As Trump continued with his remarks, the stage at the Javits Center was already being disassembled.

And the cannons placed throughout the room containing opaque, green-tinted confetti meant to look like shattered glass were emptied out into boxes, unused.