Watch: Donald Trump protesters take to the streets around the U.S.

Thousands of protesters targeted Trump buildings in New York and Chicago on Wednesday, chanting anti-Trump slogans as protests against President-elect Donald Trump popped up throughout the United States.

In Austin, Texas, protesters blocked a highway. Students burned a flag on the campus of American University in Washington, and they walked out of class in high schools and colleges across the country the day after the presidential election.

“Not my president, not today,” was a chant heard at protests from Boston to Los Angeles.

“We can’t let it stop us. If he’s the president then fine, but if Donald Trump is gonna be it then he has to listen,” she said.

At Berkeley High School in California, about 1,500 students walked out of classes Wednesday morning. In des Moines, Iowa it was hundred of high school students who left class to protest of election results. In Phoenix, about 200 students from Carl Hayden High School marched to the state Capitol in protest.

A candlelight vigil for Clinton supporters in front of the White House on Wednesday evening drew those who wanted to mourn the loss of the election.

The peaceful crowd called out “you are not alone” to over 2,600 people watching the gathering on Facebook, organizers said.

Earlier Wednesday, trash fires burned on an Oakland, California, highway as an illuminated sign in the nation’s capital proclaimed that the United States was “better than bigotry.”

Two opposing rallies crowded Pennsylvania Avenue near the White House, while protests on the other side of the country threatened to turn ugly.

One member of the crowd near the White House held an upside-down American flag, alongside the LGBT rainbow flag, in silent protest.

Pop star Lady Gaga, a vocal Hillary Clinton supporter who had performed at the Democratic candidate’s final rally in North Carolina, stood atop a sanitation truck outside Trump Tower in New York, brandishing a sign that read: “Love trumps hate.”

Brian Barto, a protester who had remained at the White House after most dispersed, told CNN affiliate WJLA-TV in Washington that he was “destroyed, honestly distraught.”

“Everything that has been built up has been destroyed. … America has failed (minorities).”

Latasha Wilson said she was scared about the next four years. “He doesn’t respect women, Black Lives Matter, Latinos. He’s a racist. … There are multiple things that add up,” she said of the President-elect.

Others went to the White House to show their support for Trump.

Nicholas Elliot, a student at Washington’s Georgetown University, said he was elated about Trump’s election.

“I feel pretty good, a year and a half process has ended and it ended my way,” the Texan told WJLA. He said he thought it was “definitely the responsibility of both parties” to unite the country.

Referencing the United Kingdom’s Brexit vote to leave the European Union, which “translated strongly here,” he said he had no fear his candidate would lose.

“There is a hidden vote,” he said, contending people didn’t voice their true voting intentions to pollsters in case they were perceived as sexist, racist or homophobic.

In New York, groups of Trump supporters cheered his victory outside Trump Tower.

At the University of Louisville in Kentucky, the base of a large-scale bronze cast of Rodin’s “The Thinker” was spray-painted with the message: Trump #BuildThatWall.”

The West Coast saw some protests in urban areas. In California, which voted overwhelmingly for Clinton, a small group gathered in downtown Los Angeles to voice its dissent, but its numbers never threatened to swell.

In the hours following Trump’s victory speech, television footage showed dozens of demonstrators walking along an Oakland road at around 1 a.m. (4 a.m. ET).

The group had grown to about 250 people late Tuesday but decreased in the early morning, police said.

Images and footage shared on social media showed dumpster fires on what was described as a stretch of Broadway, from 14th to 20th streets in the city.

Angry voters also headed out in Portland, Oregon, and Seattle.

Several hundred protesters appeared on the streets of downtown Portland late Tuesday and into early Wednesday. There were no arrests or significant reports of vandalism except for a dumpster fire, police said.

Twitter users attempted to rally opponents of Trump in a number of cities for rallies Wednesday, including in Chicago, Washington, Los Angeles and New York. 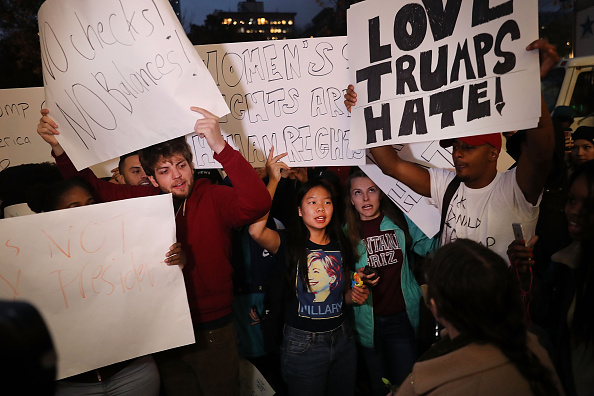