This 8.01 carat rare blue diamond could be yours for $25 million

A rare blue diamond has hit the auction market and could fetch $25 million.

The 8.01 carat, square cut ‘Sky Blue Diamond’, which is set to go under the hammer at the Sotheby’s Magnificent Jewels and Noble Jewels sale on November 16 in Geneva, Switzerland, is one of the largest blue diamonds of its type ever to be sold at auction.

Although just one of the 345 rare items being offered by Sotheby’s, the diamond stands out as a catalog highlight.

Other items of note to go under the hammer include a historic 18th century Russian diamond brooch valued at between $3 and $5 million and a 17.07 carat pink diamond which is expected to sell for upwards of $12.2 million. 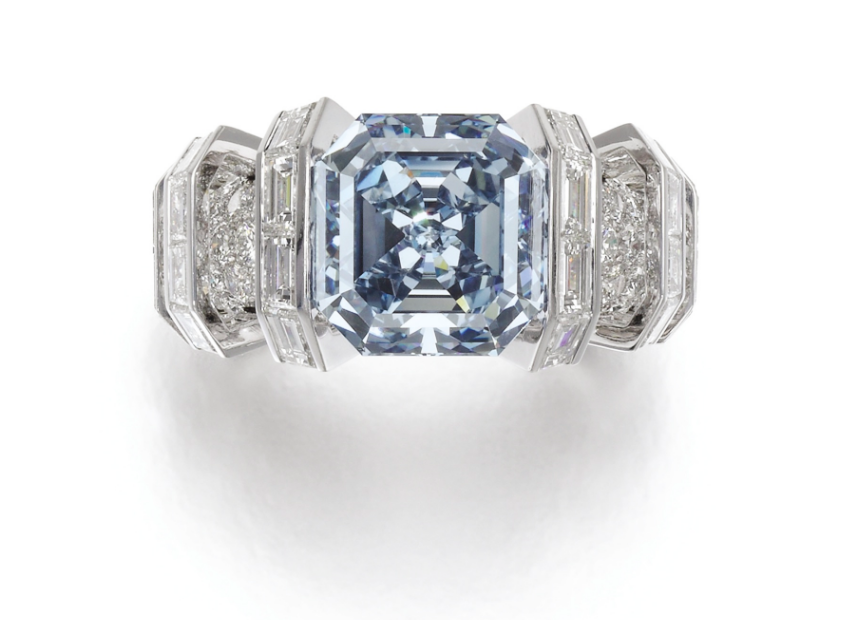 The Sky Blue Diamond, which is set in a Cartier ring, has been graded as Fancy Vivid Blue of a natural color with a VVS1 — or almost perfect — clarity classification by the Gemological Institute of America (GIA).

In describing the diamond, the GIA uses ‘Fancy’ and ‘Vivid’ as more than adjectives. The terminology is in fact used by diamond experts to determine the value of rare stones.

What makes the Sky Blue Diamond particularly interesting is not only its grading, but also its color.

“Blue is the color of trust, honesty, loyalty, reliability and responsibility. This idealistic color inspires higher ideals, and evokes peace and tranquility,” Sotheby’s says in its catalog notes on the stone.

Blue diamonds are especially rare, and although prices for other colored gems have risen of late, demand for these blue-colored sparklers has spiked in recent years.

In November 2015, a 12.03 carat blue diamond — bought by Hong Kong businessman Joseph Lau for $48.4 million — made headlines at the time for being the world’s most expensive diamond ever sold.

Lau, who named the gem “The Blue Moon of Josephine” after his 7-year-old daughter, had also purchased a $28.5 million, 16.08 carat pink diamond the previous day.

But in May 2016, the world’s largest blue diamond — a 14.62 carat gem called ‘The Oppenheimer Blue’ — stole the title of the world’s most expensive blue diamond ever, selling for a cool $57.5 million.

It still retains that title today.

The Sky Blue Diamond is being offered for sale by Sotheby’s on November 16, 2016 and has a pre-sale estimate of $15 million to $25 million.