Teen hits back at ISIS by sculpting Nimrud’s ruined artifacts 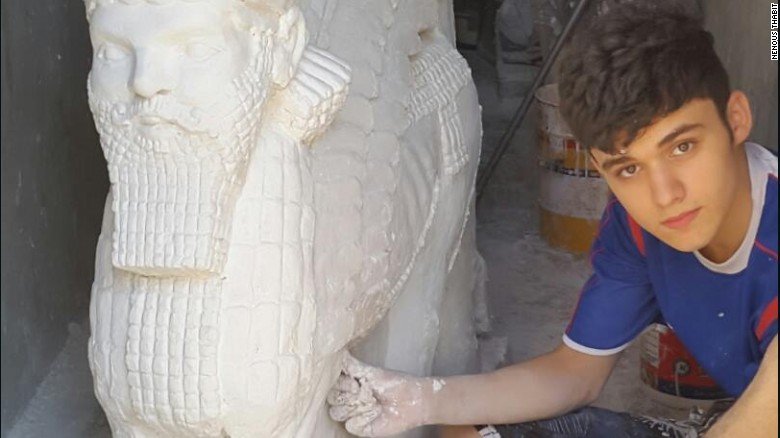 When footage emerged of ISIS destroying the ancient city of Nimrud outside Mosul, the world stood powerless in the face of a group of militants using sledgehammers and electric drills to obliterate centuries-old archaeological gems.

But 17-year-old Nenous Thabit rolled up his sleeves and began work on replicating the sculptures.

For Thabit, an Assyrian Christian, the 3,000-year-old city — which once formed the capital of an Assyrian empire reaching from Egypt to parts of modern-day Iran and Turkey — was a source of pride. He considers the artifacts of Nimrud to be the work of his ancestors.

“They waged a war on art and culture, so I decided to fight them with art,” he told CNN.

He did so by sculpting immaculate statues that resembled some of the most precious Assyrian artifacts in Nimrud and other ancient areas in and around Mosul.

In 2015, a year after ISIS began its assault on Mosul and nearby towns, the militants bulldozed Nimrud as part of their campaign to destroy symbols they considered to be idolatrous. UNESCO described the act as a war crime.

In a modest apartment in the Kurdish city of Irbil, where Thabit and his family took refuge after fleeing Mosul, the young artist meticulously carved with his sculpting cutter the beard of Lamassu, an Assyrian deity.

“Lamassu is my favorite statue,” said Thabit. “It is the strongest creature in the Assyrian heritage. It has the head of a human, the body of a lion, the legs of an ox and the wings of a vulture.”

He said it took him about 15 days to complete the piece.

According to a website that tracks the damage to artifacts, three Lamassu statues were destroyed by ISIS in Iraq.

The website is run by Christopher Jones, a student in ancient near eastern history at Columbia University in New York. He said that one of the Lamassu statues was destroyed in Nimrud, another was in the Nergal Gate of Nineveh, while the third was in the Mosul Museum.

After the Iraqi army retook Nimrud and nearby areas this week, more details are expected to emerge on the scale of the damage done by ISIS to the relics.

Over the past year, Thabit has sculpted 18 Assyrian statues and one mural. He was trained by his father, Thabit Michael, a sculptor himself, who took Thabit with him to his workshop and allowed him to play with clay from the age of seven. Michael said teaching his son did not require a lot of effort. “Nenous is an incredibly fast learner,” he told CNN. “I see huge potentials in him”.

Since then, and up until last year, sculpting was just a hobby Thabit pursued when he was not in school. But after ISIS attacked his heritage, he started taking the craft very seriously.

“So continuing to sculpt is a message that we will not be intimidated by those devils.”

He is hoping to attend art school in the Kurdish city of Dohuk next year.

“My dream is to become a prominent artist in Iraq to make my country proud and show the world that we in Iraq love life and cherish our heritage,” he said.